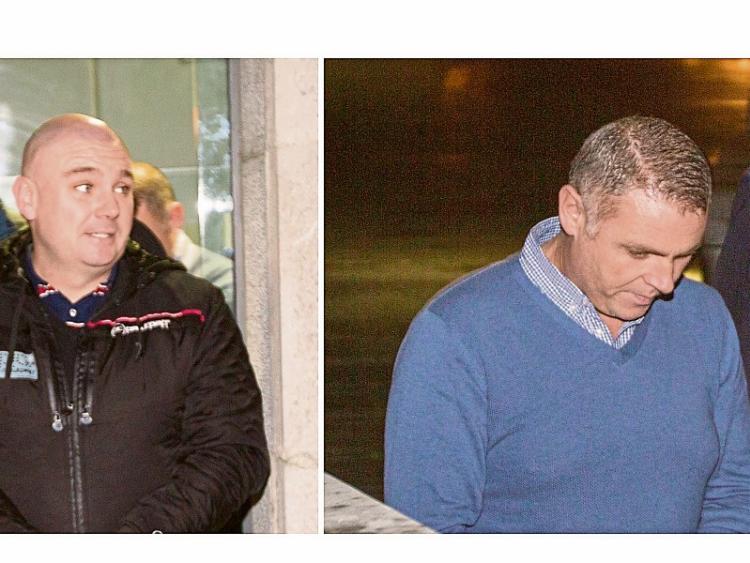 Kieran Collopy ( front left) and Brian Collopy (pictured in December) were granted legal aid. They are due to reappear in court on March 8

TWO brothers who are charged in connection with a significant drugs seizure have been granted legal aid after the State withdrew its objections.

Kieran Collopy, aged 40, who has an address at St Ita’s Street, St Mary’s Park and Brian Collopy, aged 43, of Kilonan, Ballysimon are each accused of possession of heroin, worth around €50,000 for the purpose of sale or supply.

Both men were arrested on December 15, last after gardai searched a house at St Ita’s Street, St Mary’s Park. Both were refused bail a number of days later after investigating gardai objected saying they feared they would flee the jurisdiction, if released.

Limerick District Court was told previously that Brian Collopy, who is in receipt of disability allowance, left the country on 11 separate occasions over the past year and, along with his brother, has access to an apartment in Benidorm in Spain.

Kieran Collopy, the court heard, travelled outside of Ireland five times during the same period.

While the defendants lodged bail applications in the High Court, they were withdrawn a short time before the scheduled hearing.

Yesterday, Sergeant Donal Cronin said the garda investigation into the matter is continuing and that directions are not yet available from the Director of Public Prosecutions.

Solicitor John Herbert, representing each of the defendants who appeared before the court separately, said his clients were consenting to a two week adjournment of the case.

While Brian Collopy application for legal aid was approved in December, Sgt Cronin previously indicated the State had some concerns as a Statement of Means had not been submitted. Yesterday, he said there was “no objection” to the application.

It was also previously indicated that gardai would be objecting to Kieran Collopy’s application for legal aid but again, yesterday, Sgt Cronin indicated there was no objection.

After formally granting legal aid, Judge Marian O’Leary back-dated the certificate to the date of their first court appearance on December 19.

Both men were remanded in custody and are due to appear before Limerick district court again on March 8, next.