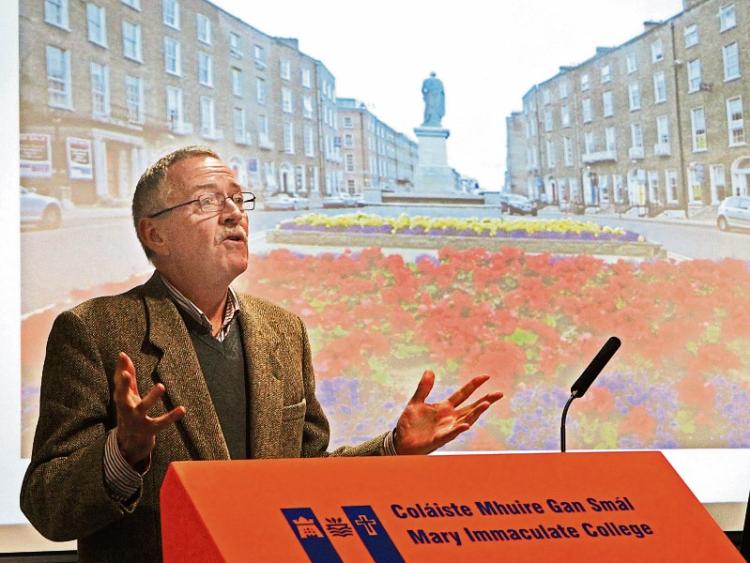 THE Living Cities initiative in Limerick has received “very little interest” in the city, with less than 30 enquiries received by the local authority.

Kieran Reeves, senior executive planner with Limerick City and County Council, confirmed at a talk organised by the Limerick chapter of the Irish Georgian Society, that the initiative, which was launched by Minister for Finance Michael Noonan, does not appear to have any solid takers in Limerick city.

The scheme was designed to encourage people to develop and live in parts of the Georgian core, which is regarded as one of the best in the country, but has been left in a continuing state of neglect.

Frank McDonald, journalist and former environment editor of The Irish Times, said at the three-panel talk in Mary Immaculate College that the scheme, which took some three years to develop through consultations, said it has been a “complete failure, and a complete waste of time and effort”.

As an example, Mr Reeves illustrated that a house on Catherine Street in the city, which would cost €125,000 to buy, would end up costing €303,000, including design costs, renovations and statutory fees, to make it into a three or four bed living space. Under the Living Cities scheme, given tax back at a rate of €5,250 per annum, the total cost would be reduced to some €280,000.

However, he said, many families will look instead to the city’s suburbs, such as Corbally, where a similar sized property would cost in the region of €140,000, and is not surrounded by derelict buildings.

One of the risks posed to those who want to develop parts of Georgian buildings, is that neighbouring properties might not be developed, and left in a state of dereliction.

Mr McDonald said that one of Limerick’s strengths is that it has “a huge Georgian area”, adding that it was proportionally as big as Dublin’s.

He said while he never shared the view that “Limerick is best seen through a rear view mirror,” he “could see Limerick’s faults too and still does. To say that Georgian Limerick has been abused and neglected is an understatement,” he said.

Internally, he said a lot of buildings are “messed about”, while very few retain their original windows, with the beautiful old sash windows, now being replaced by “swing out PVC windows”.

“Windows are the eyes of a building, they fundamentally affect it,” he said.

He was also very dubious about parts of the Limerick 2030 plan, which states that the overall condition of the Georgian buildings is ‘extremely poor’. “That’s just not the case, and it doesn’t appear to be based on any hard evidence. It would have to include a detailed survey of every building,” he said.

Mr McDonald praised the redevelopment a period building on the corner of Henry Street and Lower Shannon Street as “an example of what can be done”, and said the transformation of the site occupied by the No 1 Pery Square hotel was wonderful.

Mr Reeves said there are a number of challenges in redeveloping and reinhabiting Georgian Limerick – including a declining population in the city, rising populations in the suburbs, and poor quality housing in the city, which has contributed “to a massive housing vacancy rate of 30%”.

In contrast to developing housing schemes, the council is now taking on the role of developer in seeking to develop a number of commercial sites, including the Opera site, the Hanging Gardens on Henry Street and the former Cleeves factory.

“We in the public sector are taking a risk to show what can be achieved,” he said. “But can these schemes wash their face economically? The public sector will not see a return on it [the Hanging Gardens site] for a long time, but we are willing to do it, to create employment and drive a desire amongst people to live in the city.”

“There is no magic bullet when it comes to the problems of regenerating the city centre.”

In a questions and answers session, many members of the audience lambasted the plans to build a €15m bridge across the river Shannon, which has been described by some as a ‘vanity’ project. Among those who voiced her opposition was former Mayor and councillor Kathleen Leddin, saying the bridge would obscure one of the most beautiful vistas in Limerick.

Mr McDonald added: “The bridge is basically a bypass of a naturally meandering route. It’s a complete waste of money.” He said the money would be better spent developing a Georgian block for residential use.

Others agreed that the €15m to €20m allocated for this project should instead be spent on initiatives to reinhabiting Georgian Limerick, or investment in Nicholas Street.

Mary Hughes, director of the HRA Planning, said a lot a money will have to be spent on the public realm in the city, before we see a lot of people moving in from the suburbs or county. While she said she loved living in the city herself, the quality of life in Ballina/Killaloe proved too strong when she had a family. “The city no longer met my needs,” she said.

The talk, which was entitled Re-inhabiting Newtown Pery: The challenges and opportunities facing Georgian Limerick, was the first of a series by the Limerick chapter of the Irish Georgian Society this year.

On March 8, Giulia Vallone, senior executive architect at Cork County Council, will give a talk in No 1 Pery square at 8pm. Giulia is responsible for the beautifully designed RIAI award-winning Emmet Square, Clonakilty, which brings life back into a Georgian square, with a new park design and vacant properties being re-inhabited. The final lecture in the series, on April 12, will be given by Judith Hill, architectural historian and expert on Limerick’s built heritage. She will look at the reasons why Newtown Pery should be regenerated.