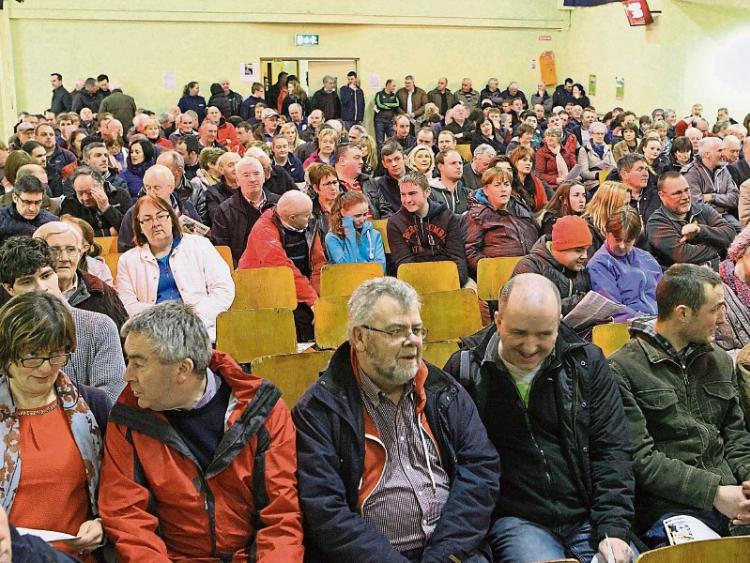 Crowds at the meeting last night, and below, the empty chairs for council staff Pictures: Dave Gaynor

TOP legal firm Arthur Cox has been brought on board to help communities in West Limerick fight controversial proposals to develop a gasification facility at Gortadroma.

The extent of opposition to the project was evident at a public meeting in Shanagolden on Thursday night which was attended by over 500 people, including a large number of local politicians.

Catherine Dowling, chairperson of local opposition group RAGE (Residents Against Gasification in our Environment) told the meeting that people in the area were “scared out of their wits” by what was being proposed for the former landfill site.

She criticised Limerick City and County Council for not engaging with the local community before signing a 30-year lease with Cadence EnviroPower that would allow it, subject to the necessary planning permission and licences, to develop the plant. The process being proposed by the company would convert municipal waste to gas, which could then be used to generate electricity.

“There was no public consultation on this proposal for gasification, no discussion with the citizens regarding the pressure this plant would put on our infrastructure,” Ms Dowling said.

She added that management from the council was invited to attend the meeting, but declined.

She described the technology being proposed for the facility as “untried, untested, unproven and is even patent pending.”

“My question is are Limerick City and County Council signing a conditional lease or agreeing to go ahead and let this go to planning and allow Gortadroma to be a laboratory experiment for a US multinational?”

Among those who addressed the meeting was Prof Vyvyan Howard a respected toxico-pathologist and prominent opponent of gasification.

His talk focussed on the danger to public health from incinerator emissions. He pointed out that, under European regulations, there was no distinction between gasification and incineration. He also dismissed the company’s claim that it would be using proven technology, describing it as being at a “development/experimental stage”.

Among the claims made by Prof Howard was that the toxicity of the ultrafine particles coming from incinerators had never been studied in detail.

But he added: “It is widely accepted by anybody who works in air quality and health that exposure to particles damages you.”

“There is no safe level of exposure.”

The meeting was also addressed by Cllr Richard O’Donoghue, cathaoirleach of the Adare Rathkeale municipal district. He said he regretted having voted last March to grant the lease to Cadence EnviroPower.

And he claimed that the council staff who briefed councillors on the project were not qualified to do so. “This lease should be revoked,” he said.