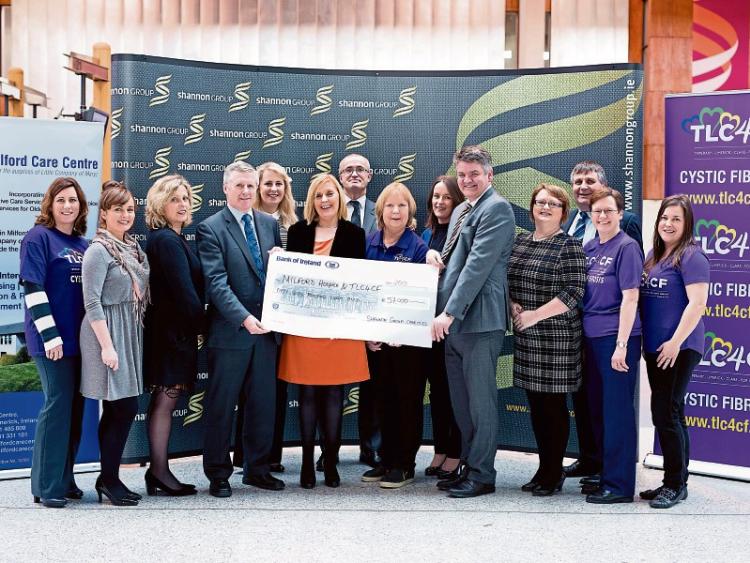 CEO Neil Pakey presents a cheque to Milford and TLC4CF

THE Shannon Group has made a donation of €57,000 to two local charities.

Milford Care Centre and Tipperary, Limerick and Clare for Cystic Fibrosis (TLC4CF) were designated charities for the Group in 2015, with the proceeds generated through seven separate events run by staff during the year.

The most successful individual fundraiser was the Bank of Ireland Runway Night Run, which saw 2,000 people take part. Other major contributors were a sponsored cycle and a night at Limerick Greyhound Stadium.

“We had a great year last year, with incredible generosity from the thousands of people who supported all our events, and we had two charities that do incredibly noble work as worthy recipients,” said Shannon’s operations director Niall Maloney.

Milford CEO Pat Quinlan said the “very generous financial support” received from the Shannon Group was “of huge importance to Milford Hospice in ensuring that we continue to maintain the current level of high quality services that we provide.

“We are most grateful to all at Shannon Group for selecting us as co-beneficiaries with TLC4CF as we fully recognise that there is a huge amount of work involved in raising such a large amount of money.”

“We are looking forward to planning our event programme for 2016.

“We had a great year of fund raising last year and had plenty of fun along the way and will be hoping to top that again in 2016,” said Mr Maloney.