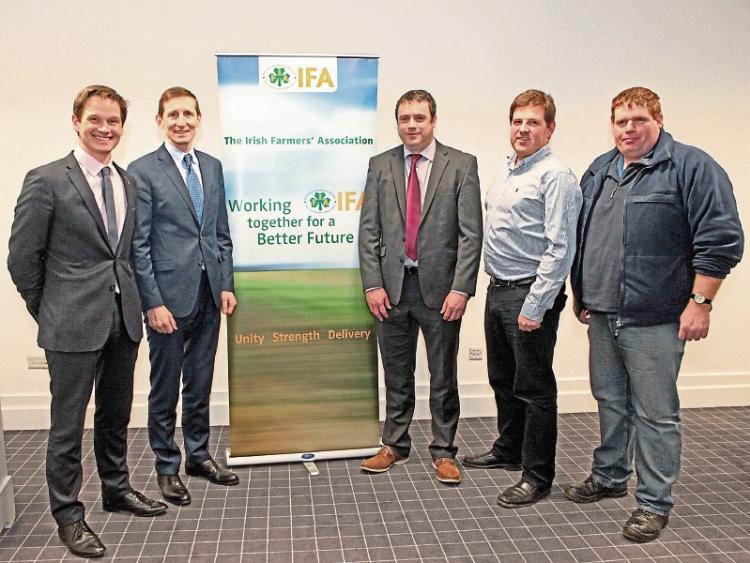 THE IFA elections are the “most important in the organisation’s history”, declared Limerick IFA chairman Aidan Gleeson at the county executive’s AGM last Wednesday in the Dunraven Arms.

Mr Gleeson encouraged farmers to attend the debates between president and deputy president candidates. The Limerick event is taking place in the Woodlands House Hotel on Wednesday, February 17 at 8.30pm.

Mr Gleeson said Limerick was fully behind Richard Kennedy, who is running for deputy president, and wished him the best of luck. The Clarina man got a rousing reception when he entered the room. He said he is running because the organisation is in a bad way and he wants to bring its credibility back.

“I am determined to get this job. I think I can win it. I will bring all my experience to make the right decisions and help solve the problem,” said Mr Kennedy.

He dispelled any myth that he mighn’t be tough enough.

“I can be as tough as any man or woman in this room if I have to be. Supposedly tough men got the job last time but they weren’t tough enough,” said Mr Kennedy, to a round of applause. Mr Gleeson said Limerick IFA will give him every support they can.

The county chairman said IFA is starting to come out of all the turmoil of the last number of months and it needs to as it is not the only issue.

Mr Gleeson spoke about the ongoing dairy crisis, the constant cycle of rural crime, the cost of inputs especially fertiliser, the price farmers are getting paid for their produce and the beef situation, to mention just five.

One farmer made the very valid point – what would the already bad situation be like for farmers if there wasn’t the current favourable economic conditions? The euro is very weak against the dollar and sterling, oil and gas prices are very low, as are interest rates, yet the farmer is on the floor. The high price of fertiliser, despite falling gas prices, was a major concern in the room.

Livestock chairman Eddie Scanlan made an impassioned speech on the importance of farmers attending the rally outside Slaney Meats.

At the rally, national livestock chairman Henry Burns said Irish farmers are demanding a better price for their cattle and fair and open competition, “which is being denied to them”.