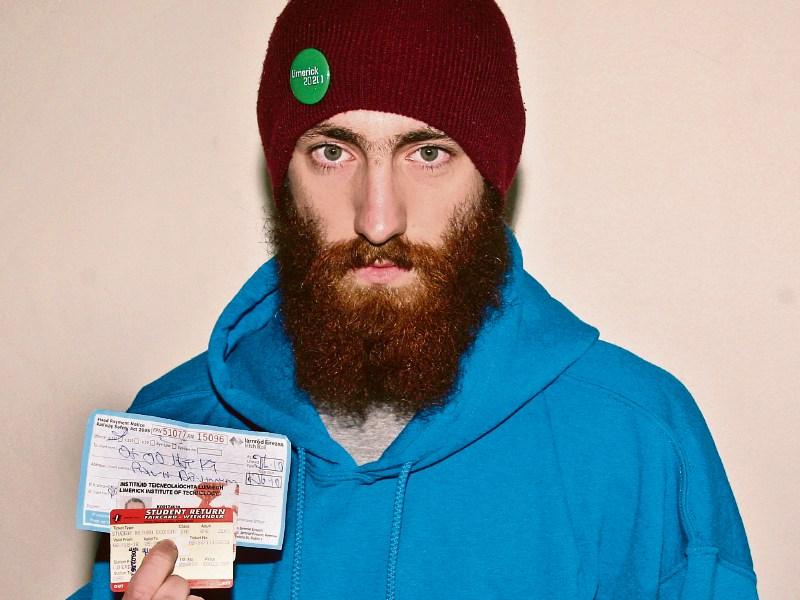 Philip Desmond, 22, of Adare, shows his fine, his valid ticket with his valid student ID

IRISH Rail have apologised over an incident where a local man was wrongfully issued a fine, after his student ID was confiscated while on a return journey from Cork.

Limerick School of Art and Design (LSAD) student, Philip Desmond, of Adare, complained via social media about how an officer aboard a train would not recognise his LIT student card, after he had purchased a student return ticket.

His Facebook statement, which was shared by hundreds of people online, said: “According to the officer that has now confiscated my student card, valid from the 20 September 2012 (still in date for my four year course) which is my property and apparently only a student attending UCD could be in a course for four years according to the officer concerned.”

He added that he had “no problem” in presenting his ID at Colbert Station when purchasing his return ticket.

The 22-year-old said he was then forced to purchase another ticket. When he asked the officer if he could make an appeal for his student ID to be returned or to get his ticket reimbursed, he said “there were no answers the officer could offer me”.

“I'm stressed beyond belief as I try to complete my final year of my course with a deadline for my thesis this coming Monday. My personal property was taken off me before been given a reasonable explanation, without my consent and with no warrant or paper work,” he wrote on Facebook.

In response to Mr Desmond’s claims, a spokesperson for Irish Rail stated: “We are extremely sorry this penalty was issued in error, a mistake on the part of the individual involved.”

Mr Desmond has since retrieved his student ID and a reimbursement, and is due to meet with Irish Rail officials – with LIT Students’ Union representatives – over the weekend incident. He said that he feels IT students are being “ill-treated”, which he will raise at the meeting.