Limerick students 'sound the alarm' for a healthy mind and body 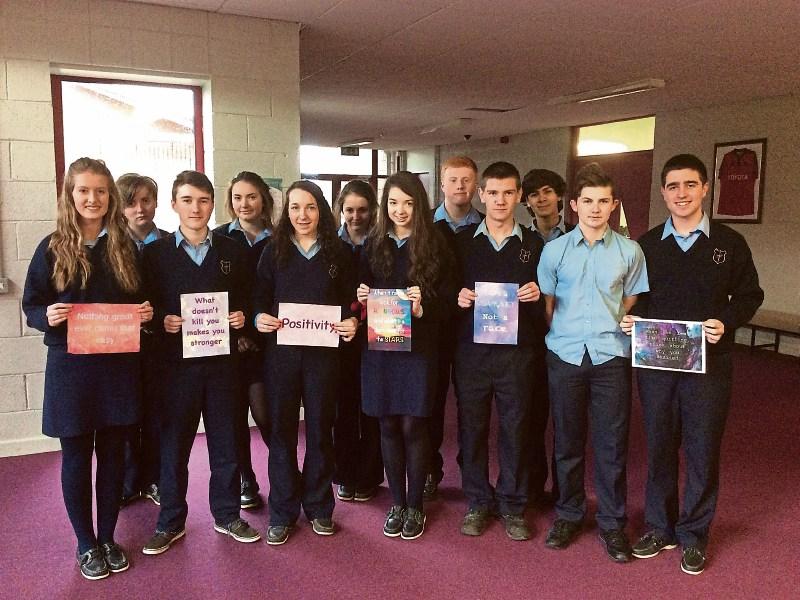 Transition year students of Scoil Pol, Kilfinane who have organised a range of activities to promote a healthy mind and body

THE importance of physical health and emotional wellbeing is being highlighted by students of a County Limerick secondary school who have organised a host of activities to promote their ‘wellness’ campaign.

Transition year students of Scoil Pol, Kilfinane, are running a number of initiatives both inside and outside of school hours to encourage people to start eating more healthily and pay more attention to their mental health.

“They have put a lot of work into promoting wellness in our school this year,” said teacher Catriona O’Dea.

The students ran a wellness week in November, and have also organised a Sound the Alarm, Help Stop Self Harm campaign.

“It was Ms O’Dea’s idea and we helped her out then,” explained student Jack McCarthy, 16.

“There were assemblies about mental health and teachers spoke about it as well. The Sound the Alarm. Help Stop Self Harm is our YSI project and that’s based around the promoting of positive mental health and discouraging self harm. The late Donal Walsh’s father Fionnbar spoke to us and  Humourfit  Theatre performed a play as well.”

A healthy eating campaign has also been kickstarted in the school.

“We are trying to eat more fruit and veg in school. We have adopted the 80:20 policy whereby 80% of the time we are eating well but then on the weekends you just have a treat.”

A Couch to 5K programme has also started for students as an after school activity. On top of this they are also organising heart screening for the community, to take place  next month.

“If you are not into playing Gaelic or camogie then you can do this,” she smiled.

The students are also planning a 60km cycle, a 35km cycle and a 5k run on April 17. They have set a target of raising €5,000 with proceeds to be split between Scoil Pol and the Irish Cancer Society.

It is anticipated that the 5K run will start and finish at the school.

“Kilfinane Athletics Club have been very good to us and they are doing the route up for us as we speak. It’s the same route more or less that they followed for the Couch to 5K - it will be based around the Kilfinane area,” said Ms O’Dea.

The 60K cycle is starting at the school, going into Garryspillane, Knocklong, Hospital, Herbertstown, Grange, Bruff, Kilmallock with the finishing point being at Scoil Pol in Kilfinane.

The 35K cycle is a shorter version of that route.

The Transition Year students wish to thank all the local businesses for showing their support and also the following who have helped them in their initiatives, Tom Blackburn, Ballyhoura, Paul Gammell, Kilmallock Cycles, Pat Barrett, Ballykisteen House and Mike Halpin, Kilfinane AC.