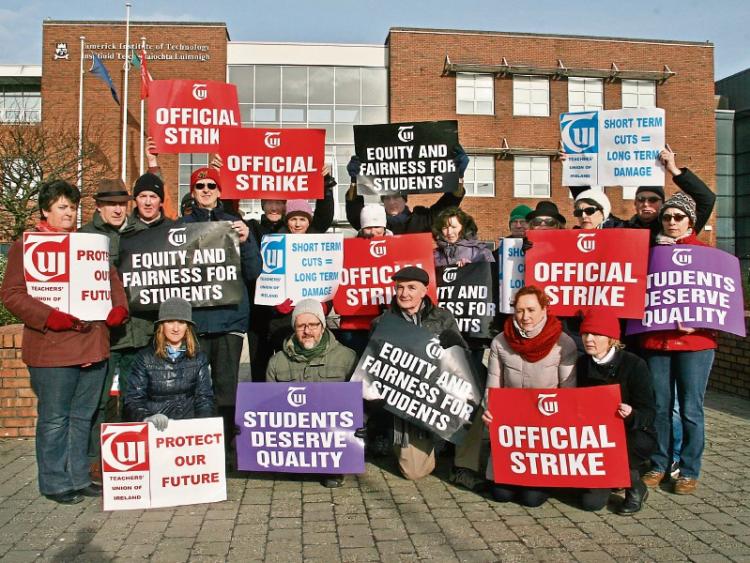 Staff backed by the Teachers Union of Ireland set up a picket from early on Wednesday morning Picture: Adrian Butler

ALMOST 300 lecturers and academic staff at the Limerick Institute of Technology (LIT) took strike action this Wednesday in protest at the “underfunding” of their sector.

A picket was set up at the gates of the Moylish campus from 7.30 on Wednesday morning, with groups of around 40 workers ensuring a continuous presence up to 7.30 in the evening.

There was a smaller protest at LIT’s campus in Clare Street in the city - the Limerick School of Art and Design.

The action – which  is supported by 92% of affected members of the Teachers Union of Ireland – saw classes cancelled.

The facilities remained open as normal, according to a college spokesperson.

Tony Mahon, the TUI branch chair, said that students have been broadly supportive of the industrial action.

Also, Limerick staff – who are being joined at Institutes of Technology staff across Ireland –  were also backed by members of the Technical Engineering and Electrical Union of Ireland.

Mr Mahon confirmed there had been no talks with management at LIT this Wednesday.

The TUI has said the strike action is necessary due to “chronic underfunding” and “precarious contracts” in the third level sector.

Meanwhile the first steps towards LIT opening its new campus at Coonagh Cross on the edge of the city have been taken, with the site opened and made ready for fit out. Education Minister Jan O'Sullivan paid a visit to the building where the campus will be located, beside Tesco Coonagh.

She hailed its development as a "change moment for Limerick" which will foster increased innovation and job creation.

Some 134 jobs in construction and 100 new permanent roles will be created after LIT was given the all-clear by the Higher Education Authority to purchase the site – once earmarked for a cinema – for €3.5m.

Engineering and manufacturing students are expected to move on site next year.