Posters at dawn as election campaign in Limerick starts with row 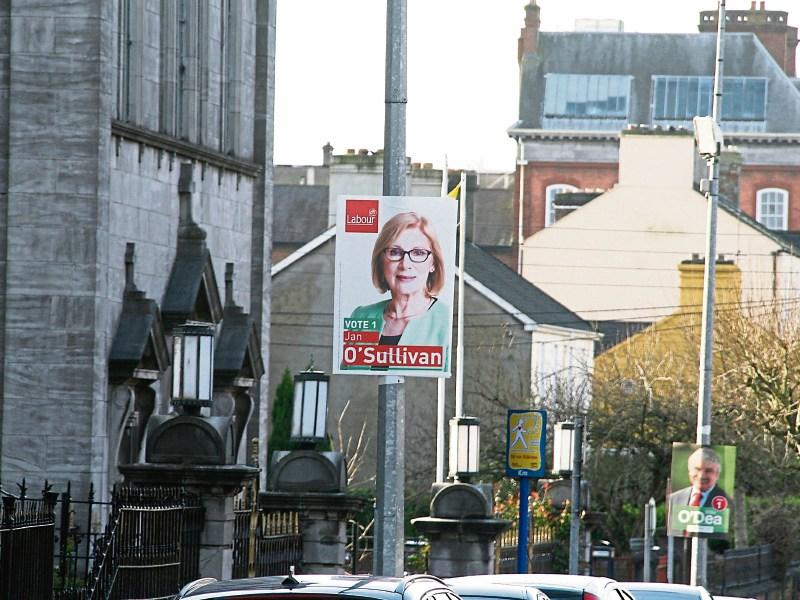 Up early: a Jan O’Sullivan poster on O’Connell Avenue

LIMERICK City and County Council has confirmed it is investigating a complaint at election candidates’ posters going up early.

Finance Minister Michael Noonan, Education Minister Jan O’Sullivan and Willie O’Dea are likely to face questions after it emerged their election posters were erected more than 12 hours prior to Taoiseach Enda Kenny’s calling of the vote for February 26.

Posters advertising the campaigns of the trio began to appear on the streets of Limerick on Tuesday evening – ahead of Mr Kenny’s decision to dissolve the Dail on Wednesday.

Ballynanty woman Anne-Marie Stacke, one of those who made an official complaint to council, claimed she “personally counted 20 election posters for Jan O’Sullivan” on the city’s northside.

She also noted Mr Noonan’s posters had appeared outside County Hall in Dooradoyle, saying that as a result “it should not be too difficult for council staff to investigate this”.

She added she was “outraged” to drive past the posters on Wednesday, adding: “It is very unfair on the other candidates. You would imagine people would chance their arm by putting up one or two posters. But they have them up in bundles and are not afraid to show they are doing it.”

Early erection of posters is contrary to the Litter Pollution Act – and there has been criticism of the trio from rival candidates Cllr Maurice Quinlivan and Sarah-Jane Hennelly, who accused the Limerick TDs of “breaking the law” in an effort to “save their jobs”.

Under the Litter Act, temporary posters are only allowed to be erected for a certain specified time period before an election.

In the context of this general election, with Mr Kenny only signing the polling day order this Wednesday, postering would not have been allowed prior. Anyone found breaking this rule can be subject to an on-the-spot litter fine of €150 per poster.

As of this Wednesday night, ten candidates had declared their intention to seek election in the four seat Limerick City constituency, while 11 will chase three positions in the rural county constituency.

Sinn Fein’s general election candidate in the city Cllr Maurice Quinlivan has accused the two government ministers of “flouting the rules. It’s very unfair We were ready to rock and roll, based on the fact the election was to be called yesterday [Tuesday].

“It obviously wasn’t, so we stood all our workers down, as we did not want to break any rules. But it seems the two ministers do not seem to think the law applies to them. It must apply to all of us or none of us. It is unfortunate.

“We always try to fight a fair, clean election. The danger is that they think they will not be fined,” he added, claiming that since his supporters had started erecting posters, all the prime positions were gone.

Mr O’Dea admitted having posters put up early, saying: “Maybe some of my supporters were a bit over-enthusiastic.”

But he alleged the complaint about the early postering had come from a Sinn Fein member, adding: “The only council I would be afraid of in this case is the army council.”

In a statement, first-time general election candidate Ms Hennelly, of the Social Democrats said: “For many people, including candidates like myself, without the resources of the big political machines, this is extremely frustrating. Laws governing posters are there for a reason and this is why we are aiding by them. Sadly, having to put up posters is a fact of political life at the moment because of the visibility it gives candidates. However, it would have a very equalising effect if we were to ban them entirely in future.”

Mr Noonan declined to comment when contacted by the Limerick Leader this Wednesday, while Ms O’Sullivan did not return telephone calls.

A spokesperson for the council confirmed they are investigating a complaint.