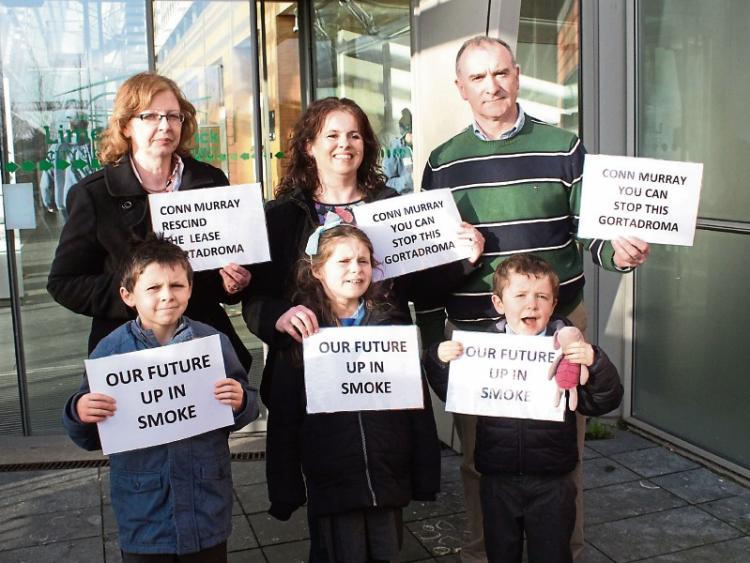 Making a stand: Mary and Joe O’Connor with their three children Eoin, Helena and James and their friend Joan O'Mahoney protesting at the County Hall

‘It’s either them or us.’ That was the message to Limerick City and County council from a mother-of-three who fears they will be forced to leave their home if a proposed gasification plant in Gortadroma in given the go-ahead.

Mary O’Connor, her husband Joe and their three children, Eoin, 9, Helena, 8, and James, 6, mounted a protest at council headquarters in Dooradoyle last week to highlight their plight.

The family lives 2km from the former landfill site at Gortadroma where the council have signed a lease for the development of a waste-to-energy plant.

Mary said that two of her children suffer from severe allergies and her fear is that, if the project is given the go-ahead, the resulting emissions will cause their conditions to worsen, making it impossible to remain in their home.

“I have two immune-compromised children and they couldn’t live here if it goes ahead,” she said.

Her children are on strict diets to manage their symptoms and no chemical cleaning products can be used in the house in case they exacerbate their conditions. However, Mary fears that all the progress they have made in the last two years will be undone if the gasification plant is given the green light.

“It is either us or them because I will not put my children back to where they were three years ago,” she said.

The family attended a council meeting at which the proposed waste-to-energy project was up for discussion. They held up signs which read ‘Our future up in smoke’ and ‘Conn Murray you can stop this Gortadroma’.

The council has confirmed that it has received legal advice to the effect that attempting to revoke the lease agreement with Cadence EnviroPower (CEP), the consortium behind the project, could be very costly.

However, it has not disclosed any precise figure for how much such a move could cost.

“The legal advice is still under consideration and will be a matter for the elected members in the first instance,” a council spokesperson said.

But Mary believes cost considerations should not prevent the council from withdrawing from the lease agreement.

“Money doesn’t come into it. I am sure there are other areas where money has been wasted but in this case it would not be wasted,” she said.

It was agreed that a special council meeting would be called to consider the matter more fully. However, this meeting is likely to be closed to the public and the media.

At the meeting, Cllr John Sheahan called for a quantitive risk assessment to be carried out on the proposed project. The motion had appeared on previous council agendas but adjourned in order to get legal advice.

“We need to go back to the people in the area with some sort of road-map as to what is going to happen,” he said. He accepted that risk assessment was part of the planning process but, he argued, there were two sets of conflicting information going around. “If it warrants a special meeting to be held in camera, I propose we do that,” he said.

The proposal was seconded by Cllr Stephen Keary who pointed out the motion had “finally reached the floor of the chamber” at the third attempt.

“I am extremely disappointed, extremely concerned at the way due diligence was done before it was given to us as councillors at local level and at full council level,” he said.

“It would appear the potential financial gain was given most credence,” he said.

Cllr Keary said that the council’s executive had not come up with any answers for the councillors. “This motion was deferred on foot of legal advice. I still think the members need to be briefed,” he continued.

“I think there is a great game of pass the parcel going on,” Cllr Cian Prendiville of the AAA said and he argued that the council should write to CEP to ask them to voluntarily step back, relinquish the lease and allow a full, public consultation on the matter. The company, he pointed out, had said they were not aware there was any rush to sign the lease yet it was signed in a rush.

“Rip it up to allow for it to be done in the correct way,” he said.

Meanwhile Social Democrats election candidate James Heffernan said he believed rumours surrounding the cost of backing out of the deal were misleading.

“These are figures that are being pulled out of the sky in order to scare people,” he claimed.

And he maintained that councillors were “kept in the dark” about the project before being asked to approve the lease last March.

“It is wrong how the council went about its business in this case and it wrong how they signed up to the lease,” he said. “Councillors were kept in the dark and that should surely invalidate the contract.”