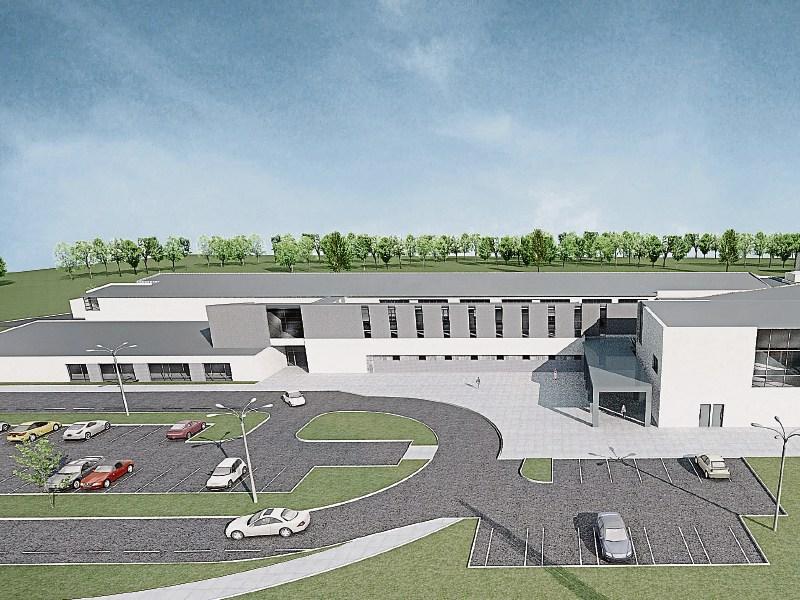 An architect’s impression of the new campus for Colaiste Chiarain at Skagh, Croom

Planning permission has been lodged for a new campus for Coláiste Chiaráin in Croom.

The new school will be located on an 22 acre site at Skagh, on the outskirts of the town.

The state-of-the-art school building will have an A3 energy rating and will include sustainable design features, such as rainwater harvesting, maximum use of natural sunlight and energy-efficient lighting and heating systems. The surrounding grounds will incorporate three playing pitches as well as internal roads, footpaths, a carpark and bus and car set down areas.

Access to the school will be off the new distributor road which is to be built by Limerick City and County Council.

The new school will accommodate up to 850 students and will replace the existing school building in the town, which is reliant on a large number of prefabs to accommodate its large student numbers. It is expected that there will be up to 100 jobs in the construction phase, should the project be granted planning permission.

The chief executive of Limerick and Clare Education and Training Board (LCETB), George O’Callaghan, welcomed the submission of the planning application.

“We very much appreciate the support of all parties in reaching this significant milestone in terms of the delivering the much-needed new campus for the Coláiste Chiaráin school community.  We look forward to a positive outcome to the planning process and proceeding with the new school development as quickly as possible,” he said.

This is the second attempt to secure planning permission for the new school. In September 2014, An Bord Pleanala rejected an earlier application on the basis that the proposed location for the school was on unzoned lands outside the town and that part of the site was at risk of flooding. In response to this, local councillors voted to rezone the site to allow the project to go ahead. The new planning application has also sought to address the other concerns raised by An Bord Pleanala.

The application has also been welcomed by local Fianna Fail TD Niall Collins who said there was “huge credit due to the Parents Association for keeping the pressure on the ETB to expedite this project”.

"This is very welcome good news for the pupils, staff and parents at Coláiste Chiaráin and represents a tangible step forward in this long running saga about the proposed new school building,” he said.

“To date there have been too many missed opportunities and unexplained delays as previous commitments were not honoured. The pupils, staff and parents have endured too many false dawns and  disappointments. The entire community attending Coláiste Chiaráin deserve better than the present third world like conditions that they endure at the present site. It's simply not good enough that pupils and staff have to learn and work in such primitive prefabricated classrooms which are detrimental to their health and learning,” Mr Collins added.