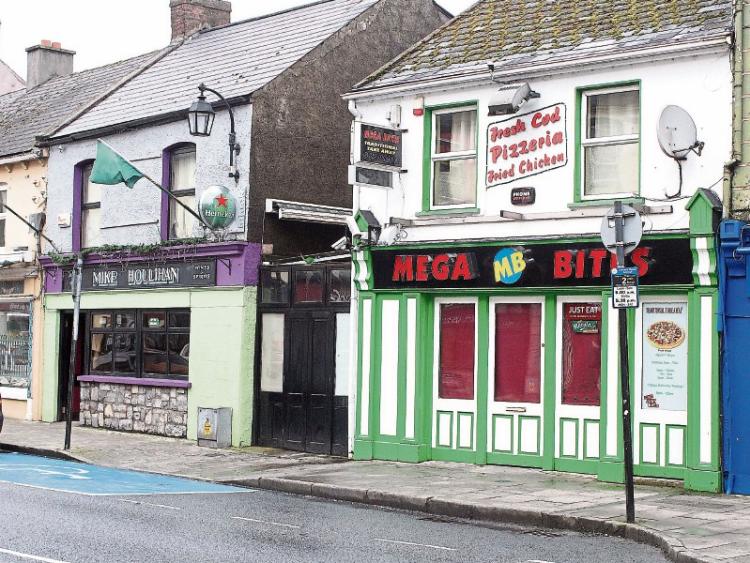 The smoking area in question is located behind the black doorway between Houlihan's Bar and Mega Bites fast food outlet. Picture Michael Cowhey

A WELL-known Limerick publican feels he is being “singled out” by the HSE who have taken him to court over a “covered” smoking area.

Michael Houlihan of Michael Houlihan’s Bar, Sarsfield Street, Kilmallock was before the local court for being in breach of the Public Health Tobacco Act on May 15, 2015.

Mr Cahill said he announced his presence to the woman in charge of the bar at the time and told her the purpose of their inspection.  He said he made his way to the smoking area and while there he witnessed five separate incidences of smoking over a period of 15 to 20 minutes.

“There were five ashtrays located within the area, there were discarded cigarette ends and there were ashes on the floor,” said Mr Cahill.

Mr Cahill told the court that the smoking area is located off the main bar and said that there is access from the main bar.

“It is a fully enclosed area which is roofed with a PVC type roof,” said Mr Cahill.

The court heard that the area measures 42ft by 7ft wide and has a total perimeter of 98 feet.

Mr Cahill told the court that where there is a fixed or removable roof there is a legal requirement that a minimum of 50% of the perimeter has to be open.

In relation to the area in question, Mr Cahill said the total perimeter of 98ft is enclosed and said it was “fully roofed as the photographs have shown”.

Mr Cahill said he had been calling to the premises since 2004 and engaging with Mr Houlihan and his representatives.

“There have been 22 separate inspections undertaken,” he said.

Mr Cahill said that subsequent to May 15 he wrote to Mr Houlihan “and requested his cooperation to bring the premises into compliance.

“This case has been listed for hearing on a number of occasions and prior to each of the hearings I have undertaken an inspection of the premises but no changes of a significant nature have taken place to bring the premises into compliance,” he said.

He said that Mr Houlihan had removed a sheet of Perspex which forms part of the roof, over a span of seven feet.

Mr Cahill said that Mr Houlihan said there were a number of other premises in the jurisdiction that were noncompliant and he felt that he was “singled out”.

The court heard that the smoking area was originally a laneway between two buildings which has since been enclosed.

Cross examining Mr Cahill, solicitor for Mr Houlihan, Robin Lee put it to him if he had observed, while he was there, that the laneway was serving another adjoining premises.

The court heard that the other building is a fast food outlet.

Mr Cahill said the width of a sheet of Perspex was unroofed at the back of the smoking area measuring an area of approximately seven feet by three feet leaving 39 feet of the area covered.

When asked by Mr Lee if he had seen anybody serving drink in that area while he was there, Mr Cahill said that he had not.

Mr Lee pointed out that both premises on either side of the laneway enjoy use of it.

“Mr Lee who has the key to the door?” Judge O’Leary continued.

When asked by Judge O’Leary if the party next door have a key to the front door, and how long the door has been there, Mr Lee said he would have to take instructions.

After consulting with his client, Mr Lee said there was no lock allowing entry from the outside.

Solicitor for the HSE, Kevin Sherry said that the area was being “held out as a smoking area for Houlihan’s Bar”.

“I don’t think the fact that a fast food outlet has access to it has any material effect on these proceedings,” he said.

Mr Lee pointed out that “this is a shared laneway”.

He said that there is an industrial type vent from the fast food outlet linking into the laneway and he also pointed out that there was no evidence before the court to say that there was work being carried out in the area on behalf of Mr Houlihan’s pub at the time of the inspection.

Mr Cahill said it was clear from the photos before the court that beer barrels were being stored there, stools and ashtrays are provided “and these are provided by the licensee for his patrons.

“It’s quite clear this is the designated smoking area. Not at any stage during my engagement with Mr Houlihan since 2004 has he indicated that this is anything other than the smoking area,” he said.

Mr Sherry said that at no stage had Mr Houlihan made an issue that it was a shared laneway and “also paid for the maintenance and upgrade of the premises.”

“This is an attempt by the defendant to avoid a legal obligation,” he added.

Judge Marian O’Leary said she had “no doubt” that it was being used as a smoking area by virtue of the presence of bar stools and beer kegs.

Mr Lee said his client wasn’t denying that his patrons smoke there but said that there was no evidence that any pub work was being carried out there during the inspection. He claimed there was an onus on the prosecution to prove this in terms of a prosecution.

When asked by Judge Marian O’Leary if people in the laneway could access the fish and chip shop from the doorway in the laneway, Mr Lee said “not the shop itself but the rear of the shop”.

“Where they prepare the food,” asked Judge O’Leary to which Mr Lee responded “yes”.

The court heard that the maximum fine in the case is €4,000 and that there is a prohibition from selling cigarettes for a maximum of three months.

Making a formal order to convict, Judge Marian O’Leary stated “we have to be practical as well” and  adjourned the case to March to allow the defendant time to comply with the rule of having a minimum of 50% of the perimeter open.