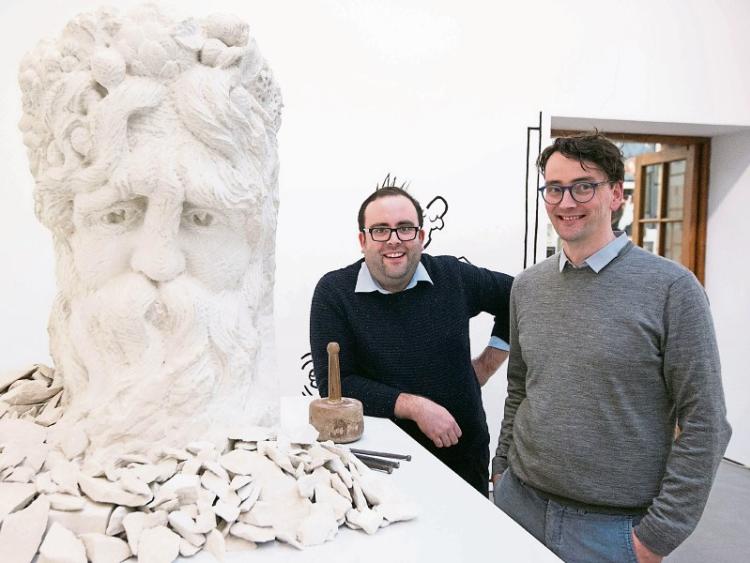 A BRONZE plaster golf ball which was stolen from the statue of former US president Bill Clinton in Ballybunion is now safely on display in the Limerick City Gallery of Art – behind two layers of bullet proof glass.

Askeaton-based artist Sean Lynch has incorporated his collection on Clinton in his all encompassing latest exhibition in Limerick.

The golf ball, which was stolen in 2005 and later recovered, has never been reinstated in its rightful place on the plinth in the seaside town, Mr Lynch told the Limerick Leader.

He said there is a “modest story” about how he came to acquire it, but wants to maintain this mystique for artistic purposes. He said he understands that there is a reluctance to reinstate it in case it is stolen again.

While it has been on display in the past in his exhibitions across the country, the addition of the bullet-proof glass, made by Duggan’s Glass in Limerick,  is a new element to the display, and a nod to the tight security that surrounds US presidents.

“There’s a specific heritage in the Mid-West about American presidents, such as Reagan coming to Ballyporeen in 1984 and now the Barack Obama plaza, which is just nuts. We have a slightly sycophantic  relationship with American imperialism. It’s also about being a little irreverent towards guys like this,” he said.

Also included is an interview with seanchai Eddie Lenihan, who campaigned for a major road in Clare to be built around a ‘fairy bush’.

That part of the exhibition is accompanied by discarded items Sean found on the roadside nearby, including worn tyres, a shoe, cans of Coca Cola and Dutch Gold, as an example of what’s left behind in the race towards modernity.

“In 500 years time if they had to dig up the roads, this is what archaelogists would find of our era,” he said.

He said it’s also a play on the perception about some art being construed as rubbish.

Arts Council chair Sheila Pratschke, who opened the exhibition in Limerick, said Adventure: Capital, the larger part of this exhibition, which was on display in Venice last year, “marks Sean out as one of Ireland’s most gifted visual artists with an extraordinary talent for unearthing hidden histories and events and using them to open new understandings of the world we live in.”

Having this prestigious show open in Limerick is a great affirmation of the vibrancy and ambition for the visual art community in Limerick, and nationally.”