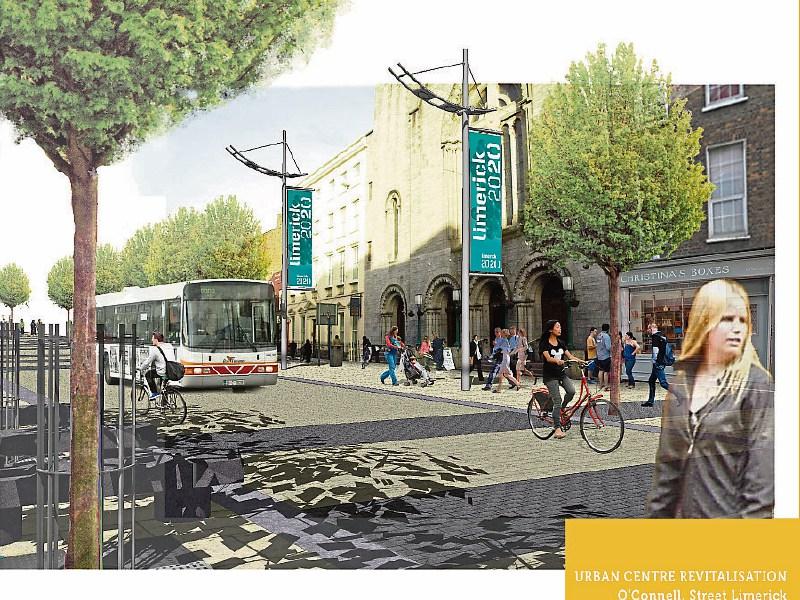 O’CONNELL Street is to be transformed under ambitious new plans put forward by Limerick City and County Council, as part of an ‘urban centre revitalisation project’ which has received €4.5m in European funding.

The Limerick-Shannon Gateway project secured €4.5m from the European Regional Development Fund, which is in turn to be matched by the local authority, leading to a €9m spend.

The bulk of that will be spent revitalising O’Connell Street while an allocation of €400,000 is to be spent by Clare County Council in improving the Town Park in Shannon.

Work on O’Connell Street is expected to commence early next year and last for 12-18 months, with a minimum of 50 construction jobs being created.

The council said the works would give “a boost to retailers and ratepayers in the city, who will see the direct visual benefit of a transformed urban core with high quality footpaths, bus and cycle lanes, soft landscaping and a much-improved streetscape”.

Public consultation and a part 8 planning process will begin later in the year to determine a new traffic management plan, with an emphasis on prioritising public transport and pedestrian access. It is likely that at least a section of O’Connell Street will be cut off to traffic.

Planners believe the project will “underpin a new era of urban mobility, while also regenerating the urban fabric” and it is a key plank of the council’s 2030 objectives.

Senior executive planner Kieran Reeves told the Limerick Leader that the funding would cover “the entire length of O'Connell Street and we have jumped at it with both hands”.

“We have already done Bedford Row, Thomas Street, William Street, the Quays, this is going to join up a whole lot of other things, from Mary I, down to the Opera site and down to City Hall,” he said. “This is going to be the new spine and it is a fantastic opportunity.

“It is about having an attractive street that people feel safe and comfortable walking on, but (also) for investors coming in and seeing a city that takes pride in itself.

“We will have a world class public realm in the city centre to augment the Hanging Gardens, Opera site and what the private sector are doing, it is all part of that chain,” he added.

“You are going to see new street lighting, looking at the whole issue of the wirescapes, the bins, all of that street furniture being done, some planting on the streets, the road signs being done properly - there is survey work to be done looking at basements,” said Mr Reeves.

“(It is about) making the city a better experience for people, primarily pedestrians, people on foot and engaging with the city, but also we will be looking at our traffic systems, how we look at getting people to be smarter about how they move around, we have a great bike scheme in town, so supporting all of this.

Proposals put forward almost eight years ago suggested the pedestrianisation of O’Connell Street and this will be put to the public for consultation, the planner said. Concept drawings will be made available to augment this, he indicated.

“Well, if you look back at 2007/8 proposals, there was an idea for bus priority area in front of Brown Thomas. Whether or not that goes ahead as part of this will be subject to public consultation,” said Mr Reeves.

“That is all going to be reviewed as part of this process. These are concepts and they are the best way we are going to get debate going,” he added.

Education minister Jan O’Sullivan welcomed the investment, calling it a “positive development that will further enhance our revitalised city centre.

“The funding will be used to enhance public spaces, widen footpaths, re-align bus corridors and provide better traffic management in the city. The city’s core urban area is being transformed.”