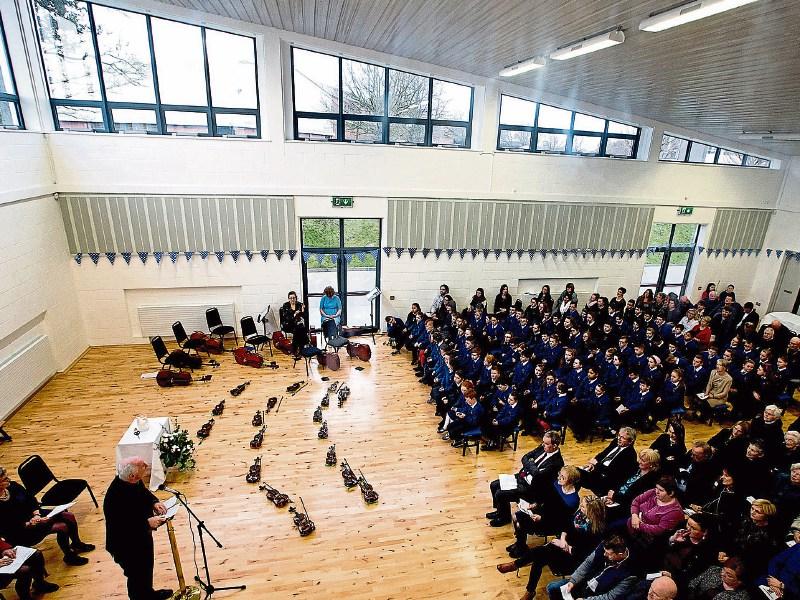 A new “state-of-the-art” school on Roxboro Road in Limerick was officially launched this week by Minister for Education Jan O’Sullivan and Minister for Finance Michael Noonan, four months after hundreds of pupils settled into the new facility.

Before Minister O’Sullivan arrived on the grounds of the new school, the excited pupils lined up in the corridor to greet their guest before she entered the hallway for the big reception.

Marking the “new beginning” for the southside school, the Labour TD said that she was “personally delighted” to be launching the school.

“I was really pleased to have been able to support efforts to develop this school and this really is a fantastic day for the young pupils, for the teaching staff and, indeed, the wider community.

“Education is the foundation stone for young people to build solid futures around but it is incumbent on all of us to invest in that and today is a wonderful example of how this happens and what it can do,” she said.

She added that she was “delighted” to have been able to play a role in the development of the school.

“Thanks to this school there will be greater opportunity than ever before laid out in front of these children.”

Minister for Finance Michael Noonan was also present to celebrate the “monumental day”. Addressing the pupils, parents, staff and guests, he said that it is a “really significant day” for everyone involved in the development of the project.

“It is also another really positive moment for the Limerick Regeneration programme.  This school will also be a lasting legacy of that programme and will go on to make a huge contribution to life here on the south-side of the city.  It will be a school that many, many people will go on to great things from and will, ultimately look back in great fondness at their time here.”

Bishop Brendan Leahy said that there has been “wonderful support” from various stakeholders throughout the project’s development, including the Department of Education, Limerick City and County Council, Túsla, parents, teachers and the Limerick and Clare Education and Training Board.

“We have achieved this through a multi-agency approach that we have been delighted to lead.  However, it really has been about the sum of all parts and we really have created something special,” he said at the official launch.

When the school opened its doors for the first time in September, principal Mary Blennerhassett said that it was an “historic day” for Limerick education.

She said that the school’s model is based on a “three faceted approach to provide quality education, to support the child before, during and after school, and the third facet is to support parents to get the best outcome” for the new pupils.

She said at the launch that all pupils and staff have blended in well into the new school.