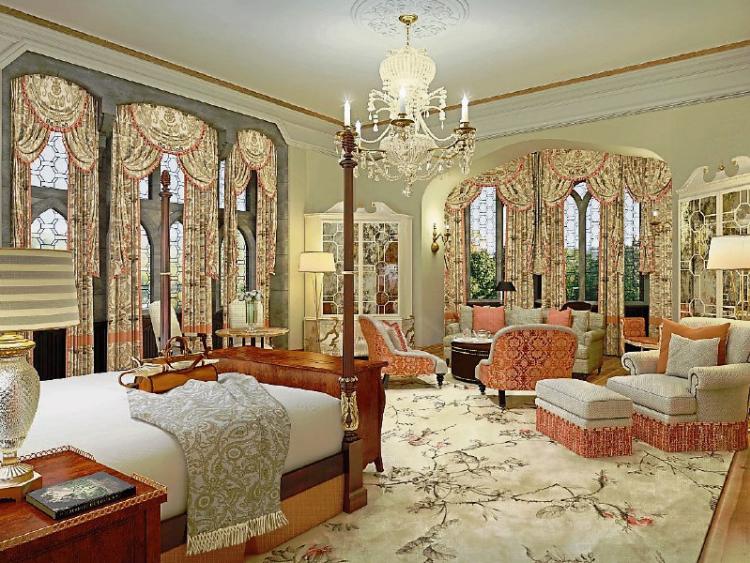 THE plans for the revamp of Adare Manor – which could transform it into the ‘Augusta of Europe’ – have been given the green light by Limerick City and County Council.

The redevelopment plans for the hotel, estimated to cost up to €50m, and now owned by JP McManus and his family, were submitted last November, and were approved this Tuesday, after months of consultation with the council, architects, environmentalists, and the public – but with 22 conditions attached.

The first major works to take place on the grounds of the Manor since 1989 are set to reinvigorate the hotel, golf club and grounds, following its acquisition by Mr McManus last year for some €30m. The hotel is believed to be worth some €5m to the local economy each year.

“This is a new beginning in Adare Manor’s grand history," said general manager Anita Higgins. "We are taking an intermission before starting a glorious new chapter in 2017. Great care and attention has been taken in drawing up the proposed plans which will ensure the renovations honour the building’s architectural heritage and maintain the hotel’s signature style and world renowned status.”

The hotel will close this Thursday, and staff are already busy carefully wrapping items which will be put into storage for the next 18 months.

A large tranche of the hotel's possessions - some 1,000 lots - will be up for sale in a public auction in the Manor next Thursday and Friday.

The works will take some 18 months to complete – ahead of the next JP McManus Pro-Am in July 2018, and the development could also see it become a contender to host the Ryder Cup in 2026. The golf course will close for about six months and members will be accommodated elsewhere.

A cinema will also be built on the grounds. The 800 acres of parkland, walled gardens and walking trails will be enhanced and improved.

It is planned to provide an activity centre, which will add an extensive range of pursuits available to guests during their stay, including falconry, archery and a children’s activity zone.

The new bedroom wing to the west of the existing hotel will be arranged over five levels, bringing the total room count to 104 bedrooms.

The development will result in a net increase of 31 hotel bedrooms serving the estate, “together with the provision of new world class spa, ballroom and conferencing facilities, urgently required with a contemporary five star hotel of the calibre of Adare Manor,” state Tom Philips and Associates in their submission to the council.

A new pool will also be built, as well as a “first class spa”, the restaurant and bar area will also be extended and a new ballroom will be built. Overall the development will result in 7,664sqm of new hotel floor area.

“The existing golf clubhouse will also be refurbished to provide a high quality facility befitting of one of Ireland’s top golf courses,” state the firm in the planning application on behalf of Tizzard Holdings Ltd.

Plans are also in place for a complete transformation of the golf clubhouse with local architects, Michael Healy and Partners. While on the golf course, world-renowned golf course architect Tom Fazio will assist with improvements to make the course one of the finest Parkland courses in Europe.

Tizzard Holdings Ltd is a recently established company, of which the directors are Colm Hannon, now the chief executive of Adare Manor, and former general manager of the Sandy Lane Resort in Barbados, and Switzerland resident Timothy John Otway, also a director of Luttrellstown Castle, as well as other companies associated with London based developer Aidan Brooks. Mr McManus also owns the Sandy Lane resort in Barbados, along with Dermot Desmond, John Magnier and a number of others.

No objections were lodged to the Adare Manor plans, though submissions were received from Irish Water, An Taisce, Failte Ireland and Inland Fisheries Ireland, amongst others.

Among the conditions set out by the council is that a bat monitoring programme be carried out for five years after construction to establish the bat usage of the area, and “enable a multi-annual pattern of bat activity in the area to be ascertained”.

The substantial works also require that a development contribution fee of €303,044 be paid to the local authority, while staff at the Manor are also encouraged to sign up to the Smarter Travel Workplace Programme to promote sustainable travel to and from the Manor.

Reardon Smith Architects, responsible for the restoration of the Savoy Hotel in London, are overseeing the redevelopment, along with local architect Michael Healy. Staff numbers are expected to rise from 200 to over 300 in 2018.