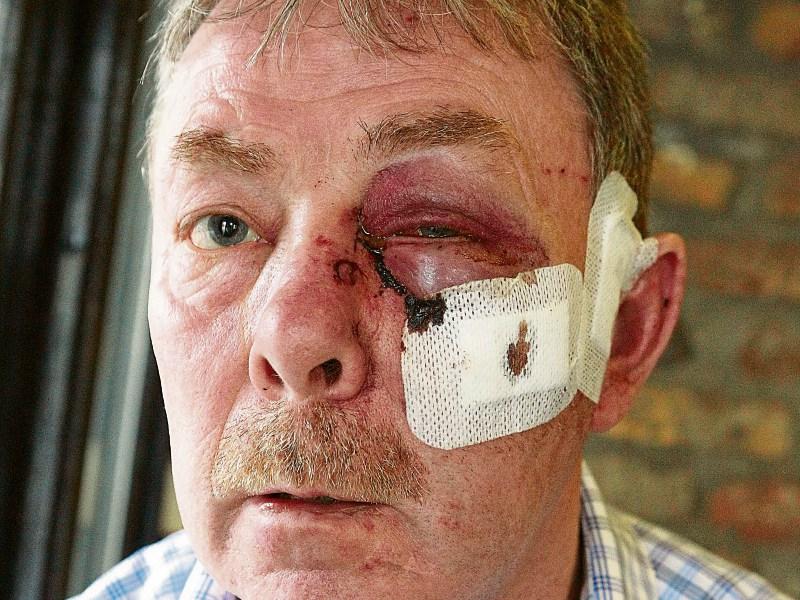 THE BARMAN who has been called a hero for single-handedly fighting off three armed raiders and preventing a robbery in a Dublin pub is from County Limerick.

John Ryan, a 58-year-old proud Doon man, made national newspaper headlines and appeared on Liveline with Joe Duffy after the story of his bravery emerged.

He put his own life on the line to prevent thugs entering the bar area and terrorising young staff at 2am in the Kingswood Lodge in Tallaght last week.

However, the heroic retired prison officer required 14 stitches to his face after he was repeatedly punched and struck with a weapon by his attackers.

“I am improving big time. I have an operation on Tuesday on the eye. There is no lasting damage done, everything is going well,” John told the Limerick Leader.

The three criminals, who were all wearing balaclavas, ambushed Mr Ryan just as he was opening the shutters on the front door to allow a taxi man, who had come to collect another barman, into the premises. They rushed in after the driver, who had a gun pointed to his head, said he needed to use the bathroom under their orders.

Despite being outnumbered three to one Mr Ryan said he was “well able to lay in to them”.

“I was more shocked when I got out of Tallaght hospital the evening afterwards and I saw the CCTV footage. I saw how bad it was and I saw two guns. One fellow was six foot three or four.

“He was a big man. As I said to Eamonn Rea [Limerick All-Ireland hurling winner in 1973] who rang me, ‘He was as big as you if not bigger’.

“Eamonn is a good friend of mine. I am involved with the Limerick Association in Dublin and I go to all the meetings with him,” said John.

Mr Rea owns a famous pub on Parkgate Street in the capital.

John hurled with Doon in his youth, winning a county junior medal at full forward and is a big follower of Doon and Limerick hurling teams. He attended an event in the Red Cow Hotel to mark the Limerick U21’s All-Ireland hurling success last year.

After retiring from the prison service John planned on returning home to east Limerick but decided to stay in Dublin after getting a job.

And it was his fellow work colleagues that were at the forefront on his mind when he stood up to the intruders. His actions prevented them from having a terrifying experience and ensured not a cent was stolen.

“There was three young lads in the lounge inside on their phones waiting for me to give them a lift home and two barman in the bar. If they got in they would have grabbed one of the young lads and gone down the hallway for the safe. They would have put the guns to their head,” said Mr Ryan.

But thanks to the Doon man the three criminals ran from the scene and are believed to have fled in a black car similar to a black Punto. Gardai in Clondalkin are investigating and John hopes the culprits are caught.

“I’m so pleased with what you did, you did us all proud,” Yvonne told John. “He’s well able and always was,” she said.

Members of the public have also expressed their admiration for the Limerick man who wasn’t going to let the criminals win.