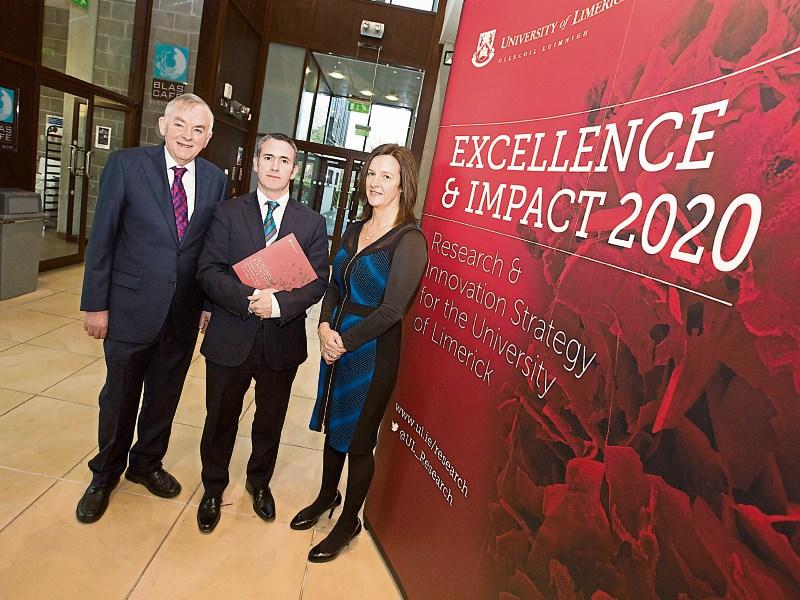 THE UNIVERSITY of Limerick has outlined ambitious proposals to increase their number of spin-out companies by 25% over the next five years.

The Minister for Skills, Research and Innovation, Damien English, this week launched UL’s roadmap for future growth and development to 2020, at the launch of Excellence & Impact 2020 – a research and innovation strategy.

Speaking at the launch, UL’s Vice President Research Dr Mary Shire said that “this is an exciting time for research and innovation at the University of Limerick”.

“Our new strategy focuses on research excellence and leveraging our position as the leader in transnational research and partners of choice for industry while extending our global reach,” said Dr Shire.

Other key targets include the desire to establish commercialisation and entrepreneurship training for all staff and students and expanded enterprise boot camp activities for second and third level students. UL also wants to see a 25% increase in new spin-out companies and a 20% increase in research income from industry. “UL has for long been regarded as a ‘university of enterprise’ in the Irish university landscape, positioning itself close to the needs of the enterprise base in Ireland, and this new research and innovation strategy is seeking to build on that innate capability,” said Minister English.

The impending arrival of a major film studio in Plassey Technological Park, next to the college, presents a whole new opportunity for UL. “Delivering graduates to suit that film-making area will be very important for us and we will work closely with the studios in defining their expectations and needs,” said Ms Shire.

UL’s latest set of financial statements revealed that it made a tax settlement in excess of €110,000 to Revenue last year over a mix-up in how it deducted tax from contractors. UL claims the mistake arose out of its treatment of the contractors as self-employed instead of employees for tax purposes.

UL also acknowledged it had not complied with public procurement guidelines in respect of five instances involving expenditure of €356,000. The guidelines state that all contracts with a value in excess of €25,000 must be put out to tender. The financial statement revealed that the presidential salary for the 2013/14 academic year was €179,809.

The university’s net assets are valued at €325m, while its revenue reserves of €97.8m are committed to current and future expenditure. Overall income for the year was up by €9.7m to €229.8m, with income from student fees rose to €83m.