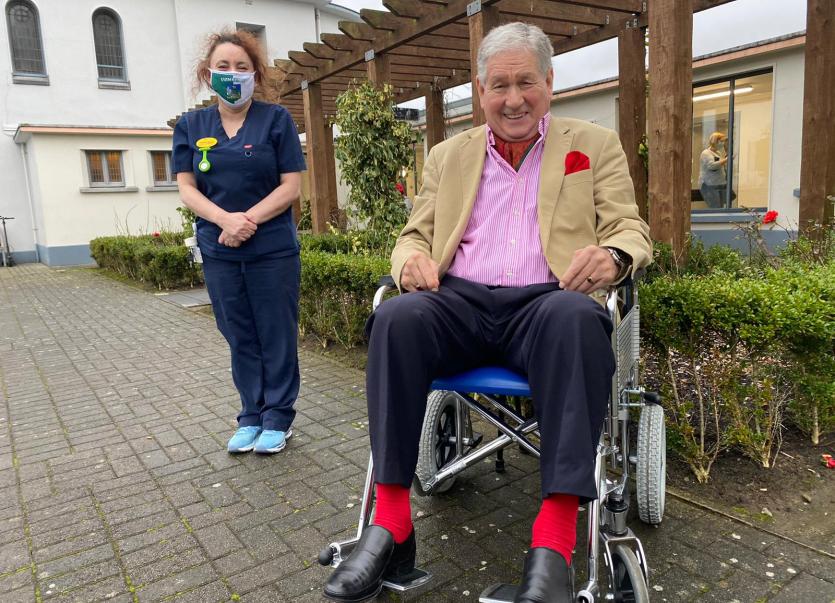 EVERY Christmas for the past four years, Limerick city man Arthur O’Sullivan has been keeping his promise to an emergency department nurse at UHL to bring her a slice of birthday cake if she helped him to recover from his illness to celebrate his 70th birthday.

With the attention to detail that’s evident from his stylish, dapper appearance, Arthur goes the extra mile to make good on the promise he made to nurse Kathleen Delaney on Christmas Eve 2016 in the Emergency Department at UHL.

Every year since, he has delivered a special cake for Kathleen, now a Clinical Nurse Manager in the Acute Medical Assessment Unit at UHL, and her colleagues.

The impressive cake that Arthur brings to UHL every festive season is prepared by his cake-maker friend, who lives in Mountrath, County Laois. Arthur collects the cake and delivers it in person to the hospital.

These efforts will be no surprise to anyone at UHL who is familiar with the special bond between Arthur and Kathleen. To all staff in the hospital, the Thomondgate native requires no surname for identification—he is fondly known as “Kathleen’s Arthur”.

The unique connection between the two was formed when Arthur, who has the rare arthritic condition ankylosing spondylitis, was brought to the Emergency Department on Christmas Eve of 2016 after he collapsed at his 70th birthday party.

“It was Christmas Eve, and I was on a trolley in A&E, and Kathleen was talking to me. I told her that it was my birthday, and she held my hand in hers, and quietly sang ‘Happy Birthday’ into my ear. All of my immediate family are dead, so there was nobody there for me, but Kathleen was there, and I still can’t describe how that simple gesture lifted me up. She’s a wonderful person,” Arthur recalled.

“I’ve been in hospitals all over Ireland, and also in England, and I’ve never seen anything like the work-rate of the nurses in the hospital in Limerick. On that night, and ever since, I’ve been so taken by Kathleen and the way she treats people and talks to people: it’s a cure in itself,” Arthur said.

“This is very important. When people show that they care for you, I think you start to care a little bit more for yourself--and I think there is some self-healing that comes with that,” Arthur said.

“When you see Kathleen at work, and the way she does that work, it’s clear that she does this with every patient. And I think it’s just fantastic. She is not just the only nurse there, but she is a person who everybody is learning from. The rest of the staff want to be like her,” he added.

“University Hospital Limerick is full of lovely people. There is one lady who does the teas, and I don’t know her name, but she always has a smile on her face and cheers the patients up. I think it’s these little things, the way you talk to people, that really help people,” Arthur said.

Kathleen Delaney has been nursing at University Hospital Limerick for the past 21 years, and says that while all patients are grateful for the care they receive, it’s rare for someone to go to the lengths Arthur has gone to in order to express their gratitude.

“I can remember the night very well. He asked me if I could grant him a wish to get him out of hospital so that he could celebrate his 70th birthday, so I just sang ‘Happy Birthday’ to him, and then I joked, ‘Well look, we’re all here starving, so you’ll have to bring us in a slice of cake,’ and thought no more of it,” she recalled.

“Then some time passed, and I was working on nights, and arrived in to work to find this big massive cake for me in reception that Arthur had left for me! He’s been doing it every year since, and we just appreciate his thoughtfulness so much. Arthur is a loveable rogue, an absolute gentleman, and a very genuine person, and I can hardly describe how much his thoughtfulness is appreciated. It really lifts you up when you see people going out of their way like that; it’s so kind,” she said.

Arthur O’Sullivan and his festive gift for Kathleen and her colleagues has become one of the most heart-warming Christmastime traditions for staff at UHL.

For Arthur, it’s a simple matter of saying thank you: “Kathleen and the staff, they’re so kind, and I just thought at the time that there has to be something I can do to give something back to show how much I appreciate what everyone is doing in the hospital. I’m not looking for any acknowledgement or anything, just so long as I know that they get their cake. And when I see the smiles on their faces, I’m just as happy as Larry. They’re very kind and gentle people in that hospital. This is my way of saying thank you,” Arthur said.