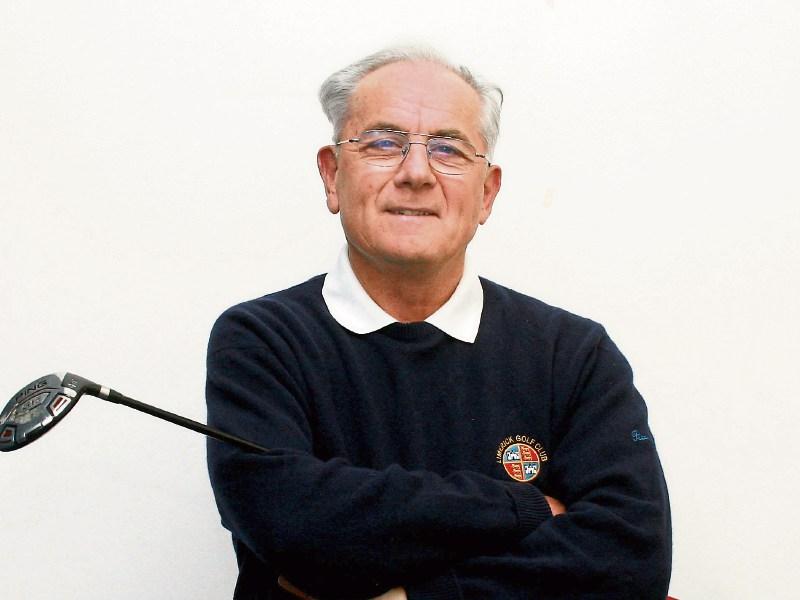 WHEN Limerick Golf Club won the ‘almost impossible’ double of Irish Senior Cup and Barton Shield at Tramore 43-years ago, nobody at the time would have believed that it would take all of that time for the Ballyclough Club to score another triumph in the Shield, albeit that the Senior Cup was won three times in the same period.

And so, there is unbridled joy at Ballyclough since Saturday last when what must be the largest and most unusual trophies in golf went on display in the clubhouse along with the All-Ireland Fourball Cup and the five Munster Championship trophies that the club's teams have won this year. There could be even more silverware on its way. Limerick GC Ladies have two teams in ILGU national finals at Knightsbrook, County Meath this weekend.

“We've been unlucky to lose a few Irish finals in both Senior Cup and Barton Shield but this time we managed to go all the way.”

Factoring the rising wind and heavy ground on the 'brutally long' Westport golf course, it was bravely decided to leave 'tower of strength' throughout the campaign, the naturally disappointed Justin Kehoe, off in the afternoon final.

In the top match against Co Sligo, the Limerick pair of Ciaran Vaughan and Michael Reddan (unbeaten all year) won the first hole and never trailed but it a very close game until the Limerick pair (putting beautifully) took the 13th and 14th to open a clear gap that became a healthy five-up by the 18th.

Limerick's second pairing of Owen O'Brien and Enright turned one down, but they also won the 13th and 14th (a four hole swing overall) and that was that.

In the semi-final of the Senior Cup on Saturday morning, Fitzgerald's young team was no match for a more experienced and classy Galway outfit that had defeated Limerick in the 2017 final at Carton House.

Demonstrating that an Irish Senior Cup semi-final can be an unfriendly place for youthful golfers, Owen O'Brien defeated Galway's 17-years old, German Boy's champion, Luke O'Neill, on the 18th, thanks to some deadly putting on the closing stretch. But, a procession of 'middle order' wins for Galway ended Limerick's double hopes.

Joe Lyons had six birdies in his 5/3 win over teenager, Patrick Naughton. Things were not going much better for Sean Poucher against Liam Nolan when Limerick reluctantly raised the white flag.

The qualification process for next year's Ryder Cup match in Wisconsin has begun. Here's wishing Captain Padraig Harrington all the best in what is sure to be a stressful year if Thomas Bjorn's book, Mind Game, is anything to go by.

Bjorn's reflections on his Ryder Cup Captaincy are well worth delving into. Reading them one would believe that pro golf is the loneliest, cruellest and most savage mental torture imaginable.

The only redemption is a genuine love of the game and the massive fortune that can be earned. However, any professional who plays solely for money is guaranteed a miserable existence.

Padraig's term of Ryder Cup Captaincy will be fascinating on so many levels bearing in mind that he is one of a kind with a brilliant CV in team events going all the way back to when he was a schoolboy amateur.

Padraig was brought up to be a fully supportive team-player, progressing step by step from club teams to Leinster, Ireland and Walker Cup representation. Padraig instinctively knows how to make his partners feel comfortable. His ability to be fully committed to those around him proliferates. This 'team mentality' came from his upbringing.

His father was a highly regarded Gaelic Football fullback with Cork, who suffered the heartbreak of losing two All-Ireland finals, which were never considered as failure.

Although there are plenty of formulae on how to go about selecting the 'right' wild cards and best combinations for foursomes and fourballs matches, these vitally important captaincy tasks will be relished and Padraig will find his own way of doing it.

The best TEAM always wins the Ryder Cup and the captain has a huge role in making sure that his team performs at least as well as the sum of its parts. I cannot see Padraig having any difficulty in making his players believe that they are all in it together.

In a Ryder Cup context no new captain (ever) has had as much experience of team golf behind him - including Paul McGinley.

While, golf is a selfish, solitary game not really ideal for a team environment, it is team golf that can give even a three-time Major Champion, like Padraig, the most enduring satisfaction.

Victory means so much more when you can share it with others.