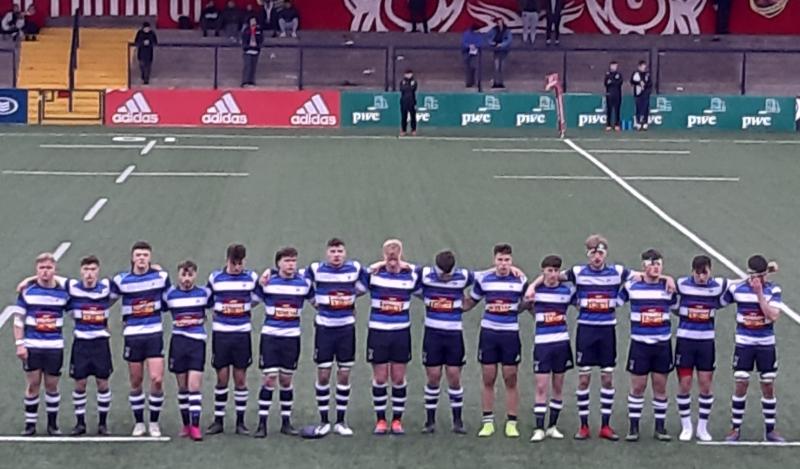 The Crescent College Comprehensive players pictured before kick-off in their Clayton Hotels Munster Schools Senior Cup tie with PBC, of Cork, at Musgrave Park this Wednesday

CRESCENT College Comprehensive will face Rockwell College in the quarter-finals of the Clayton Hotels Munster Schools Senior Cup after their bid to reach the semi-finals the direct route were ended by PBC, of Cork, in a 21-8 defeat at Musgrave Park this Wednesday evening. The final scoreline was somewhat harsh on the Dooradoyle side who remained well in contention throughout the high octane contest. However, a clinical PBC side, who won the try count 3-1 proved deserving winners.

Crescent, by virtue of their top two finish in the group stages of the new-look competition, get a second chance to reach the semi-finals and will now set their set on a home quarter-final clash with Rockwell, who defeated Bandon Grammar School in their play-off fixture at Musgrave Park earlier on Wednesday.

Crescent's matchday squad included 11 survivors from last season's Senior Cup squad and as many survivors from the 2017 squad which lost out to CBC in dramatic fashion in the Junior Cup decider.

Limerick City Senior Cup winners Crescent had defeated Glenstal Abbey and St Munchin's College in the new-look round robin phase of the competition, while the Dooradoyle side also drew with Rockwell.

Crescent made a disappointing start, falling 7-0 in arrears after five minutes when PBC full-back Patrick Campbell dotted down, with the try converted by Cork All-Ireland minor football winner from last September Alex Walsh.

Back came Crescent, however, and the Limerick side got themselves right back in the contest in the 15th minute when Pres' infringed at a breakdown inside their own '22 and influential out-half Ben Davey punished the home side with the resultant penalty for 3-7.

However, the home side took a grip on the game five minutes before half-time when, after a marauding surge by flanker Jack Kelleher, who was eventually halted close to the tryline, prop Billy Kingston dotted down. Walsh converted for a 14-3 advantage to the home side.

The home side maintained their 11-point lead until half-time, in a high tempo, lively encounter.

The opening score of the second half arrived in the 57th minute courtesy of a try to Crescent College. The Limerick had threatened to cross the whitewash on more than one occasion, especially when a clever move off a line-out came agonisingly close to yielding a five-pointer.

Crescent finally breached the Pres' defence when, following a smashing break by excellent centre Darragh Casserly up the middle of the pitch, fleet-footed winger Tony O'Sullivan was on hand to score in the right corner.

Although the Limerick side failed to convert the difficult conversion, Crescent now trailed by just six points, 8-14.

Crescent's hopes of securing an away win and taking the direct route into the semi-finals were short-lived when Pres' number eight Alex Kendellen powered over from close range with centre Darragh French converting for 21-8.