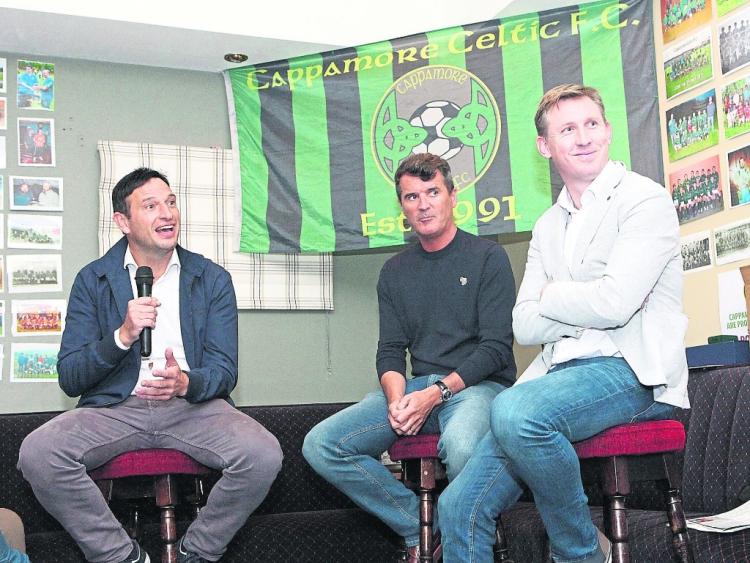 Noel Mooney, organiser of a fundraiser in Hayes' for Cappamore Celtic in 2017, with Roy Keane and Mike Aherne Picture: Dave Gaynorr

NATIONAL media are reporting that Cappamore man Noel Mooney is to take up a leading role in the FAI.

The association has declined to comment. Former FAI chief executive John Delaney voluntarily stepped aside from his role as the organisation’s executive vice-president last month. Controversy surrounded Mr Delaney since The Sunday Times ran a story on the €100,000 cheque he wrote to the FAI in 2017.

The Irish Times says that although Mr Mooney would not get the CEO title, it seems that Uefa is about to entrust the Limerick man with overseeing things at Abbotstown as they take a much more central role in funding the troubled organisation’s day to day activities.

Mr Mooney, aged in his early forties, was a schoolboy player at Cappamore Celtic and is president of the club despite living in Switzerland in recent years. Once his career as a goalkeeper with Shamrock Rovers, Cork City and Limerick FC ended he joined the FAI as national club promotions officer.

He left six years later for Uefa where he worked first in its marketing department and then as head of development.

In August 2017, Roy Keane was in Cappamore at the request of his good friend, Mr Mooney. The Irish legend was interviewed on stage in Hayes’ function room by Mike Aherne. A huge crowd attended.

All monies raised went towards Cappamore Celtic’s pitch development. Mr Mooney also brought Roy Keane to the grounds on the outskirts of the village.

Rumours that Mr Mooney was in the running for the top job out in Abbotstown have been circulating for the last month. His appointment and the title of the position is expected to be announced next week. Mr Mooney will be the second County Limerick man in a high profile FAI position as its president, Donal Conway, is a Kilmallock man.