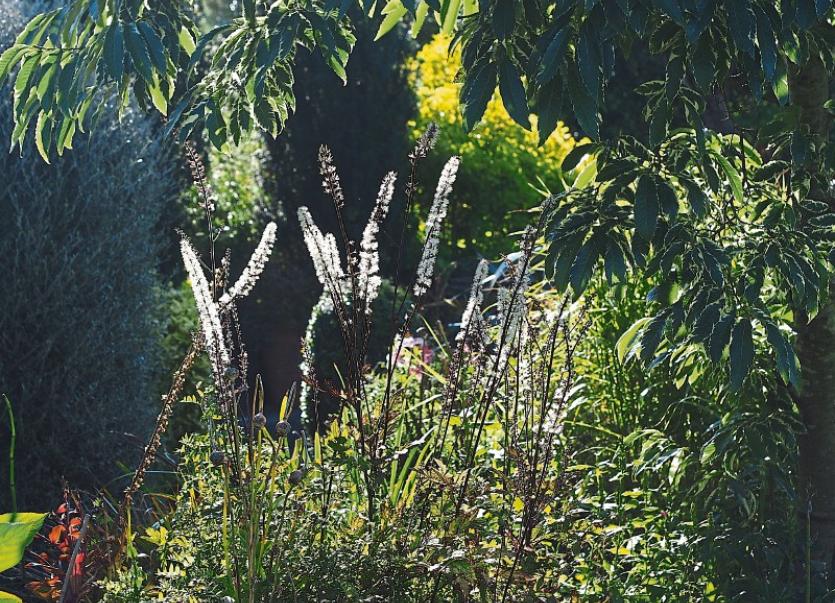 A photo of cimicifuga growing in Phyl's garden

Cimicifuga simplex ‘Brunette’ is a variety that we have grown for a number of years. It is a clump forming perennial with very dark purple foliage and purple stems. It grows about three feet tall. The plant is sure to turn some heads at this time of the year when it produces arching stems covered in slightly purple tinted white flowers. The flowers really stand out against the dark foliage. It flowers from September to October.

Flowering shrub of the week

Perovskia (Russian Sage) is a shrub that has just finished flowering. Perovskia atriplicifolia is a striking small Himalayan deciduous sub-shrub and was named the perennial plant of the year in 1995. It is a graceful perennial with grey green foliage. During late summer and early autumn this upright plant will put out sprays of lavender blue flowers which attract butterflies and makes nice cut flowers. It releases a strong aroma of sage when crushed. It grows about 4 feet tall and performs best in full sun. It likes a well-drained soil, preferring a sandy soil that drains well. Perovskia is a great plant for the middle of a herbaceous border. It should be planted in groups of threes or fives to give the best effect.

The plant should be cut to the ground each spring before growth begins to ensure a lush full growth for the next season. Mulch around the plant, but not on top of the plant, with 3 inches of compost in early spring. The blue flowers of Perovskia are a pleasant sight in late summer and look great when planted with Rudbeckias and asters.

The variety ‘Blue Spire’ has larger flower heads and is a most impressive plant, even in winter when bold groups of the white stems make an attractive feature. Perovskia is a great addition to any garden’s sunny perennial border.

Tomato plants are producing a bumper crop at the moment and the surplus tomatoes can be used to made chutney. Take 2 lbs of tomatoes and place in boiling water to remove the skin, then slice them thinly and place in a heavy based saucepan. Finely chop half pound of courgettes and a half pound of onions and add to saucepan with a teaspoon of the following: salt, ground coriander, ground cinnamon and half teaspoon of paprika and a quarter pink of vinegar. Bring to the boil and simmer for about 30 mins. Add a further quarter pink of vinegar and 6 ozs. of brown sugar and stir until sugar is dissolved. Simmer uncovered for 20-30 minutes, stirring occasionally, until chutney becomes thick and there is no excess water on the surface. Pour into hot jars, seal and store for a week before use.