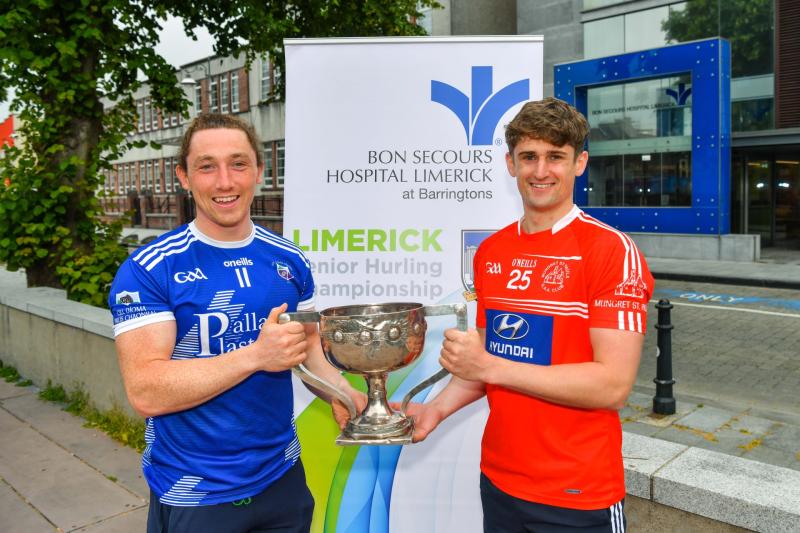 Peter Nash of Kildimo-Pallaskenry and Niall Mulcahy of Mungret at the launch of the Bon Secours Limerick SHC. PIC: Diarmuid Greene

IT'S a clash of Limerick two newest senior hurling clubs this Friday evening when Mungret and Kildimo-Pallaskenry meet in round one of the Bon Secours Limerick senior club hurling championship.

The sides from out the N69 meet in Clarina at 7pm.

Both had players on John Kiely's All-Ireland SHC winning panel.

Kyle Hayes the big attraction in the blue and white of Kildimo-Pallaskenry, who won the County Cup competition on their return to the senior ranks last year.

They also had Darren O'Connell on the county panel, while Mungret had Rory Duff, who is carrying an injury at present.

Both clubs are under the same managers as last season.

Liam Cronin is Mungret manager with Kieran McDermott as coach, Gerry O'Brien as selector and Paul Harman as S&C coach.

Kildimo-Pallaskenry continue with Patrickswell's Natal O'Grady as manager with a new coach in Declan Nash, who is a former Limerick senior camogie manager. They have selectors in Jim Maher, John Barry, Darragh Hayes, Brendan O'Shea and Danny O'Sullivan.

Key to Kildmo-Pallaskenry success on top of Hayes and O'Connell will be their inter-county football duo Peter Nash and Tony McCarthy, Barry O'Connell and they have a young gun in Davy Fitzgerald.

Key to Mungret's promotion last season were Patrick Begley, Niall Mulcahy and Paul O'Brien, while they have young guns in Barry Duff, Brian O'Meara and Liam Lynch, who is currently out injured.

There is also a game, this Friday evening, in the Lyons of Limerick Premier IHC - Cappamore v Monaleen in Caherconlish at 7pm.