OPINION: We got there on Sunday and that's what matters' - Shane Dowling 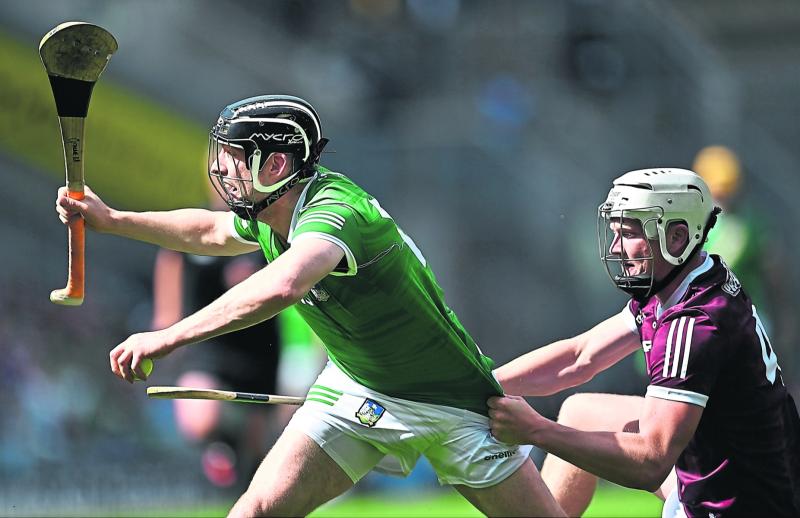 Limerick's Graeme Mulcahy is pulled back by Darren Morrissey, of Galway, during Sunday's All-Ireland hurling semi-final

AT the outset of every year, we can talk about the league, Munster finals, winning this and beating whoever, but the one place deep down and inside us that we really want to be is involved in the All-Ireland final. And we are there.

I think it’s fair to say that we were spoilt last year, and in most games when we came down the home straight, there was enough comfort there and we didn’t have to be worrying about the result.

Well, it has been everything but this year. Coming down the home straight against Clare in the Munster final, and again on Sunday, God it wasn't an easy watch.

As a player, I never felt that pressure, or anxiety even. You had to be as cold as ice, and act as if you were just going on to play a normal game. Of course you knew that wasn’t the case, but you approach it in a way where you can’t buy into the game that it is.

I think the reason I always found it easier as a player is because I felt I could do something about it, I could influence it, whereas when you are in the stand it is totally out of your control. I spoke here last week that I just felt there was a small bit of complacency around the place before last Sunday's semi-final.

That it was nearly a matter of turning up and duly winning easy and coming home. I was slightly concerned and felt it was a bit of a banana skin, and that’s how it nearly turned out.

It’s funny - while three years ago has nothing got to do with the All-Ireland final, against Kilkenny is 2019 we got off to a very sluggish start, and we were behind early doors - and when you look at Limericks fast start on Sunday you knew they weren’t going to allow that happen!

After 10 minutes, it looked like Galway would be blown out of it, but when things settled down for them they were really solid. They will be disappointed with their scoring efficiency, and a bit of Lady Luck also losing out to two Hawkeye decisions.

Aaron Gillane was unstoppable every ball that came to him, but to his credit the boys out the field delivered in quality ball. Barry Nash got up the field for a point and Mike Casey was high up the pitch on many occasions as well.

The roles they are playing is not spoken about enough, and the full-back line can nearly attack as much as defend in this day and age.

Three points up at half time was probably a fair refection of the first half, even though Galway will have felt it could have been a lot closer! But the minute Galway got that goal in the second half, at no stage did I ever feel comfortable.

I was waiting and waiting for John Kiely to unleash Cian and Peter Casey, and when they came on I thought that would be the difference.

When Padraig Mannion caught that ball over Cian’s head not long after, it was at that stage I thought ‘we are in big trouble here’. But up stepped David Reidy.

I know David a long long time now, same age and played on all the teams growing up together. I’m thrilled for him that he is now getting the credit that he deserved, because he is a serious operator. Essentially, his movement and hurling brain to get him into the right positions got Limerick over the line on Sunday.

The sideline battle was also interesting. Henry Shefflin was calling for every ball, and Paul Kinnerk spotted him and made sure he got his fair share in also. Both received yellow cards to try and calm them down, but it was real championship stuff and great to see.

I have also said that I would have been a fan of moving Kyle Hayes back to wing back and he wasn’t hitting his heights all year, but by God, back out at number 11 on Sunday, he was well and truly at home.

He got on loads of ball, got a few scores and ran hard at the defence. All in all, we got there and that’s what is most important.

A very exciting 10 days or so ahead, and as I always say, let's enjoy it while we have it. From a logistics point of view, it would have been bonkers if Clare had won on Saturday evening, but the fact it's Kilkenny means it will be a lot easier for people to get tickets, and there won't be as big a sideshow as there could have been.

Lastly, I would like to express my condolences to the Fitzgerald family. Jordan was on his way to the game to support his beloved limerick, when he passed away suddenly.

I saw his picture the other day and I recognise him from going to the games over the years. May he rest in peace.