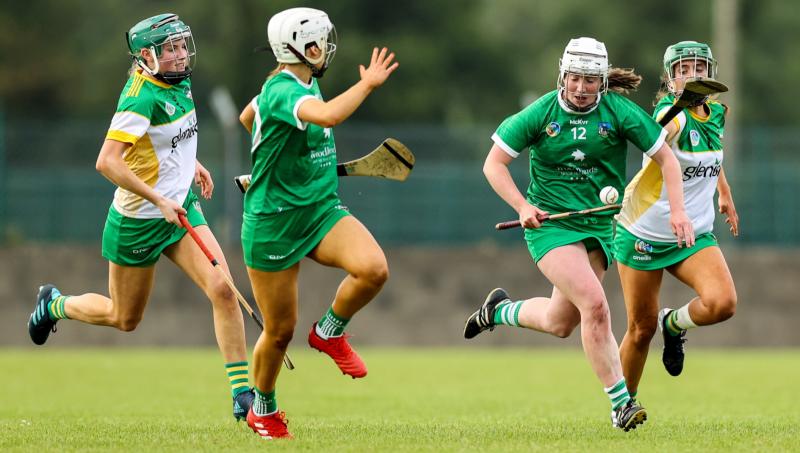 LIMERICK manager, John Lillis could not keep the smile off his face as he spoke after his young side secured their first competitive victory of 2022 in front of a raucous home support at Cappamore GAA.

The Shannonsiders defeated Offaly by 0-11 to 0-9 in Group 1 of the Glen Dimplex All-Ireland senior camogie championship, after a ding-dong tussle that could have gone either way, to give themselves a chance of reaching the final six.

It was a notable turnaround for Limerick, given that the Faithful women had banished them to Division 2 of the National League with a 13-point drubbing two months ago.

Thanks to a resolute defensive effort and nine points from Caoimhe Costelloe that included a sensational closing score from play, they were able to overcome a number of missed opportunities and some stellar saves by Eleanor Clendennen between the Offaly posts to prevail.

“They dug extremely deep,” remarked Lillis. “I’m so happy. It’s been a long time coming to try and get a win for this group and to get it today in a home venue is absolutely outstanding. I’m just absolutely over the moon at the moment.

“We’d a number of goalscoring opportunities in the first half – six in total, I think. We didn’t take any of them. Between hitting posts, hitting goalkeepers, that’s just been the story of our season this year. But still, we ploughed on and kept Offaly to two points (0-6 to 0-4) into a very strong wind.

“The subs we brought on made a massive impact. Caoimhe Costelloe putting over points for fun when she got the room, it’s brilliant to see. And the crowd we had from Limerick supporting us, gave us that little extra bit.

“It’s great for us. We’re finally back on the road. We can look forward to Down now in two weeks, knowing we have the win and we can now, some way look at the possibility of a quarter-final.

“We have so many young girls on the team making their senior debuts this year. They wouldn’t have experienced anything like this. Offaly fought from the very start to the very end. Only for Michelle Curtin tracking back so far to get that hook at the end, Offaly would have scored a goal to win it.

Costelloe earned player-of-the-match plaudits but emphasised the spirit in a squad through a testing transitional period.

“I’m delighted we got the win in the end,” said Costelloe. “It was nip and tuck and it could have gone either way in the end. We’re just hugely relieved to get over the line. It’s been a long time coming. We’ve had a tough year of it and to get a win, there’s just no better feeling.

“We’ve had a good few injuries and girls have stepped away for various different reasons but the one thing we have, is we have a very good group of players. There’s 24 togged today and we’ve a few more at home that couldn’t make it. We’re a very, very tight group. We know we have to work hard and it paid off there in the end. We put our bodies on the line. It could have gone any way but I’m just so happy we got our rewards today.

“It’s my job (to score frees). It’s no different to anybody else on the field. You have to back yourself. Marion (Geary), our sports psychologist, has been very good at that. Just take every free as it is. I missed the penalty and you just have to dust yourself down and go to the next one.”

Offaly manager, Susan Earner was distraught for her charges. The former Galway All-Ireland-winning goalie declared herself “angry” with some of the decisions of referee Liz Dempsey, attributing the second yellow card that led to Sarah Harding’s late sending off to resultant frustration.

“They’re absolutely devastated,” Earner declared. They gave it everything and there was nothing in it.

“I’m just so angry at some of the decisions that were made. It just seemed like the rub of the green went with Limerick all the time. Not taking away from Limerick’s performance, they brought their A-game but some of the decisions were terrible and it’s just disappointing because we worked so, so hard. Two teams deserved to go out and be treated fairly in both sides.

“When you’re on a yellow card it is very dangerous. I’m not sure what happened over there, whether something was said, but that just showed the frustration of my girls. A lot of things went against us and they obviously get very frustrated at the end.

“The aim of the game for us was to put in good performances throughout the championship. Disappointed with Antrim, played relatively good against Galway. We played well today as well. Probably slow to start in the first half. It’s gonna be hard to get them going again (into Kilkenny in two weeks) but these girls, when they come up against opposition like the Kilkennys and Galways, they up their game as well.”