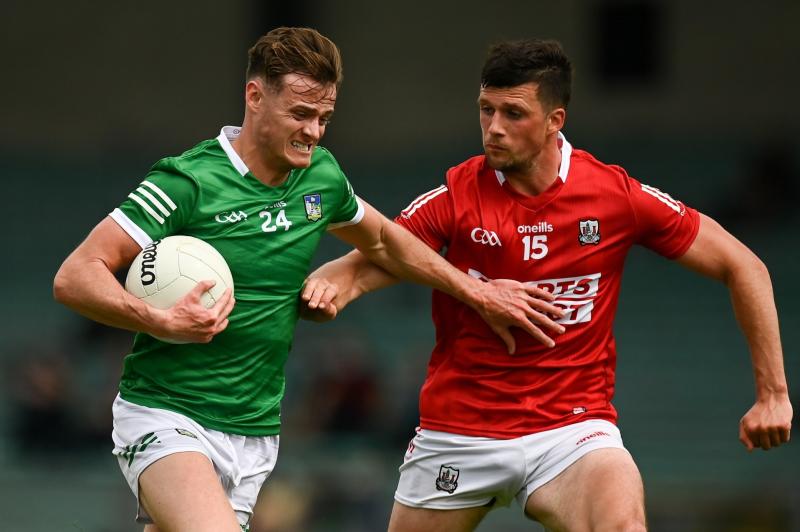 Brian Donovan, of Limerick, in action against Daniel Dineen, of Cork, during the 2021 Munster SFC semi-final at the TUS Gaelic Grounds

LIMERICK senior footballers will look to reignite their championship season when facing Cork in a Round 2 All-Ireland qualifier at Páirc Uí Chaoimh on today, Sunday, 1.30pm, live on RTE TV.

Limerick will be looking to reach the All-Ireland quarter-finals for the first time since 2011 this weekend.

Billy Lee's charges will be looking to bounce back from their disappointing Munster final defeat to a free-scoring Kerry side at Fitzgerald Stadium, Killarney last month. Limerick are one of 12 counties still in contention to claim the Sam Maguire Cup in July.

If the Shannonsiders overcome Cork this weekend , they will advance to the All-Ireland quarter-finals where they will come up against one of the provincial winners.

Four Munster counties have advanced to the last 12 stage of the championship as Clare have also progressed to this stage thanks to their qualifier win over Meath last weekend.

Limerick and Cork will be meeting for the third time in four seasons in the championship this weekend, with Cork having won the 2019 and 2021 Munster semi-finals.

To date this year, Limerick, who gained promotion to Division 2 of the Allianz Football League for next season, have had three outings in the championship.

Limerick edged past Clare 4-1 in a penalty shoot-out in the Munster quarter-final in Ennis after the sides finished level, 2-16 to 1-19 after extra-time. Billy Lee's charges then overcame Tipperary 2-10 to 0-10 in the provincial semi-final at Semple Stadium, Thurles, before losing out heavily to Kerry in the Munster final.

Limerick have won eleven, drawn one and lost 17 of their 29 All-Ireland senior football qualifiers to date.