Limerick man living in the shadow of an erupting volcano 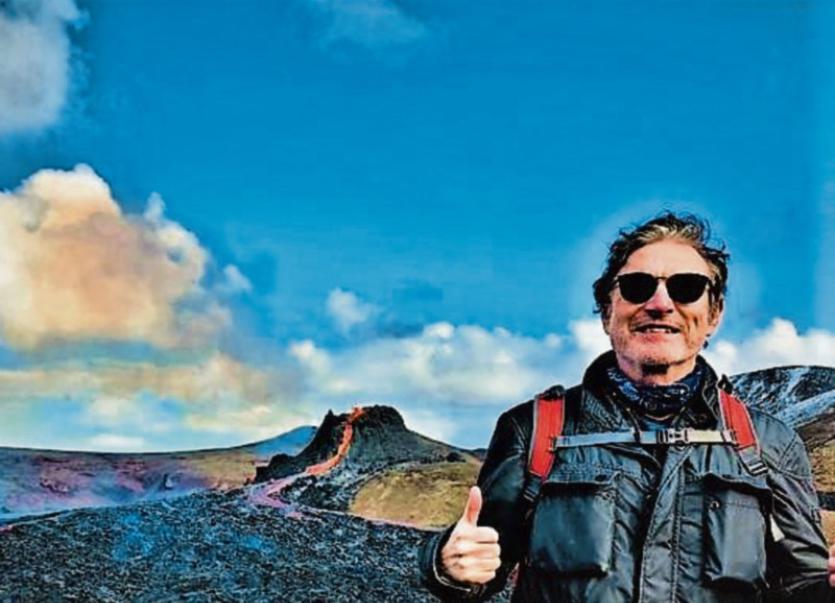 IT WAS Friday night, March 19, 2021, and I was relaxing at home watching a popular weekly chat show on Icelandic state television. Suddenly the host cuts short his banter mid-sentence, puts a hand to his earpiece and listens.

After a brief silence he looks directly at the camera and announces that the volcanic eruption we knew was imminent has just happened. Icelanders’ response to the news ran the gamut from excitement and trepidation to downright relief. After weeks of predictions by experts, the unbearable waiting was over. Granted there was danger, but at least now we had something other than Covid-19 to talk about.

For months Iceland’s Met Office had warned that a volcanic eruption was on the cards here on the southwest peninsula known as Reykjanes. We'd been experiencing regular earth tremors, some of them close to 6 on the Richter Scale. People respond differently to earthquakes: some take the sudden violent jolts in their stride; others can find them downright scary, especially when the tremors occur regularly and items and pictures start falling off shelves and walls.

My personal seismic detector is my mother’s Waterford Crystal sherry glasses in a kitchen cupboard. Their clinking immediately alerts me. Several weeks of this and I’m pretty accurate at guessing what a particular volume of clinking corresponds to on the Richter Scale!

Because the volcano’s location is c. 40 kilometres from Reykjavik city, and close to the fishing village of Grindavík and near to Keflavik International Airport, the major concern has been the direction the lava flow might take. Infrastructure is limited in Iceland so any damage to the few main roads could compromise evacuation plans. Also, depending on wind direction, poisonous gases can pose a serious threat.

Fortunately, the eruption in Geldingadalur Valley turned out to be what Icelanders term a túristagos or “tourist eruption”. This is an eruption having no ash emissions; in total contrast to the famous eruption in 2010 of the volcano with the unpronounceable name, Eyjafjallajökull, whose ash clouds brought world aviation to a standstill.

Iceland is situated on the boundary line where two tectonic plates are pulling apart or diverging, the American and the Eurasian plates; consequently, we frequently have what are called fissure eruptions.

Basically, what happens is the growing tension in the earth's surface eventually causes it to rip open in a long fissure. From the fissure magma spews forth in soaring fountains like a giant fireworks display. Eventually, a central crater will form on the fissure. The wonderful thing about fissure eruptions is that you can get quite close to them and enjoy the spectacle, thus the Icelandic term “tourist eruption”.

Icelanders are no strangers to the devastating impact of volcanic eruptions. In 1783, ash and gases from the cataclysmic Laki eruption would kill 90 percent of livestock and 25 percent of an already struggling population. The situation was so dire that the Danish authorities considered moving the remaining 35,000 Icelanders to Denmark. But the Icelanders stubbornly prevailed and today the country has a population of 360.000. On average, Iceland experiences a volcanic eruption every five years.

It's this calm resignation to the unpredictable and oftentimes merciless natural environment they live in that has enabled this hardy nation to persevere in the face of great adversity. How fitting that the national motto is ‘thetta reddast’ which literally translates as “it’ll all work out in the end”.

In late March, I hiked to the volcano. It takes about 90 minutes each way traversing some rough terrain. What surprised me was the number of people doing the same as myself, even though it was early afternoon on a weekday. Icelanders are special in that when there’s an eruption, rather than flee to safety, they flock to see this latest wonder of nature like moths to a flame.

The sight that finally greets you is at once magnificent and terrifying. Dante's description of hell has nothing on this. This is the real deal! From out of the crater magma cascades high into the air. Several neon-orange rivers flow down the hillside and eventually come to a halt as the lava starts to cool and congeal. Even at the extremities the heat is intense.

Despite the immediate danger the atmosphere at the volcano is quite jolly. Whether it’s spring madness or sheer relief after being cooped up for so long, people's behaviour is bizarre: some are playing volleyball, others singing, one individual is dancing naked and quite a few are attempting to grill sausages.

By mid-April over 40,000 people had visited the volcano. This huge volume of visitors has posed a headache for both the police and civil defence, who lack the manpower to supervise and assist such large crowds. While Covid cases have been very few in Iceland there is a risk of it spreading when large numbers congregate even outdoors. Another worrying concern is that foreigners who have come to Iceland to see the volcano have not quarantined for the required five days. Further incidents include weather conditions rapidly changing and hikers getting lost and several people who have gone too close suffering gas poisoning. The big risk of course is the sudden opening up of a new fissure that catches people unawares. Already there are four fissures and last week there was a narrow escape when one opened up close to where a civil defence team had a monitoring station.

The experts forecast that the eruption could go on for months. Unfazed, Icelanders see this not as a problem but an opportunity. The eruption has attracted extensive international media attention and Iceland hopes to capitalize on this free advertising to kick-start its dormant tourist industry. Over the past decade tourism has been the fastest growing sector in the economy and now has an importance equal to that of fishing. Promote Iceland, Iceland's equivalent of Bord Fáilte, is already preparing a marketing campaign highlighting the volcano as a reason for visiting Iceland once travel restrictions are lifted.

Like Odin in Norse mythology, Icelanders live in a world where chaos and order are regularly at odds. However, the nation's ability to be innovative and how adept they are at coping with setbacks will undoubtedly see them through. Remember, ‘thetta reddast’ – it'll all work out in the end.

Neil McMahon was born in Thomondgate and attended St Mary's National School and CBS Sexton Street. He played underage rugby with Shannon. While studying for the H. Dip. in Ed. he taught at the Presentation Convent, Sexton Street. After graduating from UCC he pursued post-graduate studies in Icelandic history and literature at the University of Iceland.

For close to five decades he has lived in Iceland and taught at all levels of the Icelandic educational system. Today he works as a guide both in Iceland and Greenland. His brother, Ralph McMahon, lives in Coonagh.