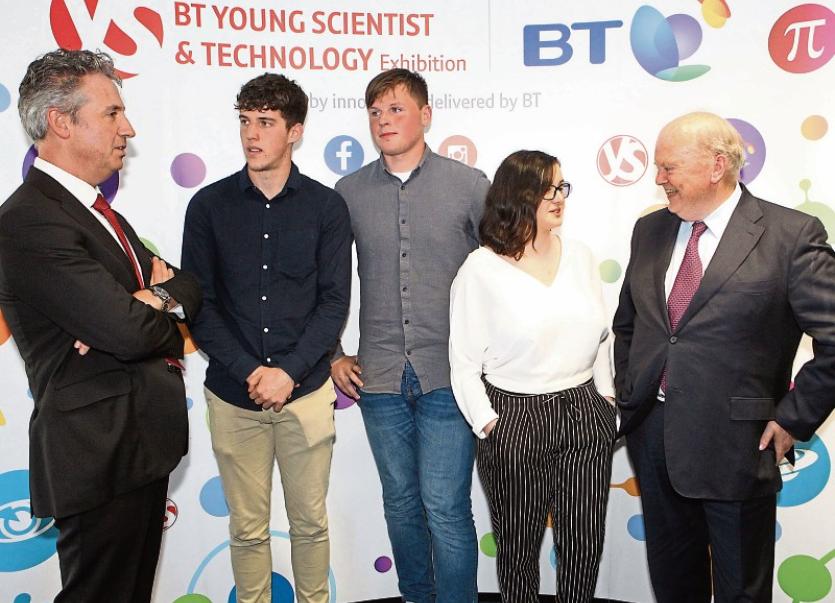 THE 2018 BT Young Scientist and Technology Exhibition was officially launched in Limerick this Monday, as the deadline for entrants approaches.

The BTYSTE launch was held in Limerick this year following a significant increase in entrants from the city and county last year.

Limerick’s past entrants and winners, including the Collison brothers, were also celebrated at the event.

“Limerick has always had a proud history of entering the exhibition, but last year the entries rose by 25 percent,” said Shay Walsh, managing director of BT Ireland.

“There’s a proud tradition of participation from schools like Castletroy College, Crescent College Comprehensive, Desmond College, to name but three, and the success of the two past winners from Limerick, Donald McDonnell and Patrick Collison,” he said.

Both McDonnell and Collison are currently working Stateside. Donald McDonnell, the 1978 winner of the exhibition, has had an almost 40-year career in cancer research, and is attached to a university in North Carolina.

“Professionally, it was one of the most fun days of my life. It was a pathway to go to university – I ended up getting a scholarship,” said Limerick’s first ever winner, Mr McDonnell, via video link at the launch.

I'm delighted to be speaking on a panel discussion at today's BTYSTE launch in UL #BTYSTE2018 #STEM https://t.co/0LzIqZplu7

Deputy Michael Noonan spoke about his teaching days in Crescent College Comprehensive, where he taught English to Mr McDonnell.

Shay Walsh encouraged students thinking about entering to do it before the deadline for entries passes. “September 28 is the deadline. We usually have over 2000 applicants, and the judging process commences at the end of September, and we will whittle that down to the top 550.

“My encouragement for all the students out there thinking about it –  get your paper in, we’ll assess it, and if it’s of good enough quality, it’ll move into the final exhibition itself, which is a great week in January.