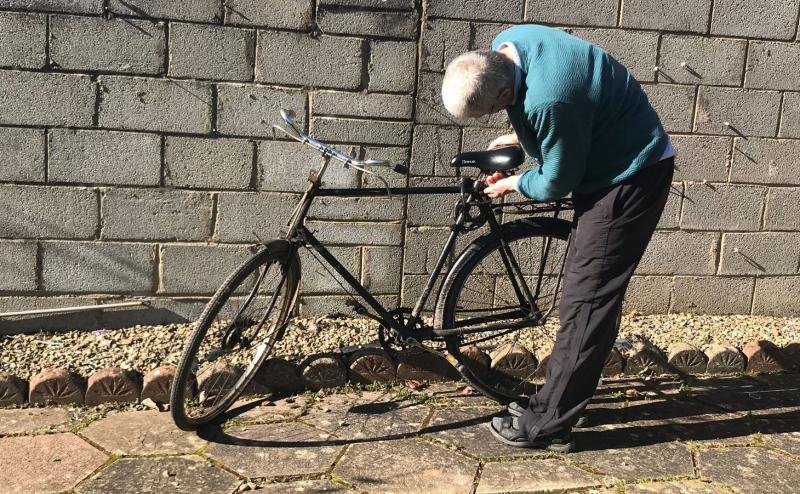 The High Nelly bike was stolen from the Corbally area some time in the last two weeks.

AN ELDERLY gentleman is shaken after his 40-year-old bike was stolen from his shed in Limerick.

The High Nelly bike was taken from his premises in the Corbally community some time in the last two weeks, leaving the 72-year-old and his wife “deeply upset.”

His daughter, Teresa, told the Limerick Leader that her father was a regular sight in the local area as he took his old-fashioned bike out to UL or along the Shannon Banks each week.

“He has had the same bike for most of his life. He used to use it when he cycled to work in Galvone.

“It is an original High Nelly with a Raleigh symbol on the front. We fear it may be broken up for parts as it isn’t in great condition,” Teresa explained.

Over the years her father swapped out the saddle, replacing the old leather one with springs to a more modern version, giving the bike an unmistakable identity. He also added a lick of black paint.

She recalled one evening several weeks ago, when she saw her father speeding around the corner on his way over to her home.

To her surprise, and to her father’s delight, she learned that the brakes had not been working for some time.

“He didn’t love the bike to do it up and sell it on to make money, he just simply loved it because it was his bike, and he has had it all this time,” Teresa added.

A collector’s item, the family expect the bike to be sold on to a refurbisher of vintage bikes but are holding out hope that the thief may have ditched the bike outside temporarily, before moving it on.

As it is an old bike, it doesn’t have a serial number, which makes it very difficult for the gardaí to trace, Teresa told the Leader.

The local community has rallied around the family and have even offered several replacement bikes.

Despite this, nothing could hold the same “sentimental value” that the missing vintage High Nelly had, now leaving him “heartbroken” in its absence.

“If the bike is miraculously returned to us, we promise there will be no questions asked, my father just wants the bicycle he loves so dearly back,” she appealed.