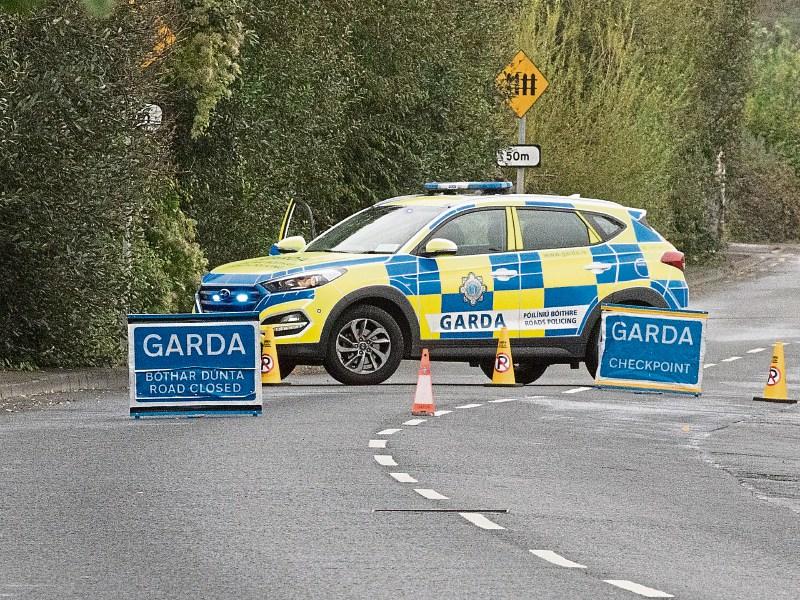 The scene of the fatal collision near Parteen | PICTURE: Liam Burke

TWO gardai brought a Book of Condolences to the home of a Limerick mother whose 12 year-old son had survived a horror crash, an inquest has heard.

The delivery of the Book of Condolences, by the gardaí, for schoolboy Jason Hogan to the home of Gillian Hogan hours after the crash was one of a series of mishaps as a result of a mis-identification of two males, one aged 24 and one aged 12 - following a fatal crash on September 26 2019 that claimed two lives.

A double inquest at Ennis Courthouse has heard the bodies of two men, driver Patrick Hogan (30) of Brown's Quay, Thomondgate, Limerick and back seat passenger, Jonathan Healy (24) of Creagh Avenue, Kileely, Limerick were incinerated from the crash at Quinspool, Parteen outside Limerick city shortly after midnight on September 26, 2019 after the car became engulfed in fire following a fuel tank rupture.

However, as a result of the mis-identification, the mother of the deceased Jonathan Healy, Jackie Taylor, was wrongly told that her son was being treated for his burn injuries in hospital and she travelled first to University Hospital Limerick (UHL) and then onto St James Hospital in Dublin to be with the injured patient who she believed to be her son.

In her deposition to the inquest, Gillian Hogan said she had decided that she would formally identify the body of her 12 year-old son, Jason after the garda delivery of the Book of Condolences to her home and a garda request about who would identify Jason.

However, Gillian Hogan said she received a call from her sister at lunchtime on the day to say that Jason was in fact alive and in hospital in Dublin.

In her deposition, Gillian Hogan stated: “At that point, I didn't really believe it as the gardai said that it was Jason in the car."

At this Tuesday's inquest, both families demanded answers from gardai as to how the mis-identification took place.

The late Patrick Hogan was Jason’s uncle and his mother, Irene Hogan asked at the inquest: “How could you mistake Jason for a fully grown man? No way.”

Now aged 14, Jason Hogan was a front seat passenger in the car and emergency services found his injured body on the ground a number of feet away from the burning car.

A second injured passenger, Adam Carver (20 at the time) was found in a nearby garden and both were taken by ambulance to UHL. The bodies of the deceased men, Patrick Hogan and Jonathan Healy remained in the burnt out car.

Senior officer with the Limerick Fire and Rescue, Colum McCarthy told the inquest that it was ‘pandemonium’ at the scene and "very chaotic on the night".

Confirming the rapid response by the emergency services to the call out, Mr McCarthy said that city fire service were alerted to a car in flames at 12.19am and that three fire engines from Mulgrave Street were at the scene by 12.26am.

She told the inquest: “I saw Jason’s feet from outside the hospital room. I knew straight away it was him. I know his feet. I know my child.”

Jason - who was staying with relatives on the night of the crash - was put in an induced coma in hospital until early November 2019 and Gillian Hogan said that her son doesn’t remember the crash and his last memory prior to the crash was eating popcorn at the kitchen table at home.

She said: “He doesn’t remember the accident thank God. I hope Jason never remembers anything about it.”

In her deposition, Jackie Taylor recalled gardai knocking at the door of her home at 4am on the morning of the crash.

She stated that two gardai told herself and Jonathan’s Dad, Jason, that there were two deceased and two critical from the crash “and one critical was my son, Jonathan and he was in the Regional (hospital)”.

Ms Taylor said: “We got dressed and went to the regional (UHL). They let us in 20 minutes after we arrived. I said that he didn’t look like Jonathan but the doctors were convincing us that it was Jonathan as he was all swelled up. He was all covered up and Jason (Healy) was sitting down holding his hand.”

The medics transferred the patient to St James Hospital in Dublin and Jackie Taylor travelled up by train.

On arrival at St James Hospital, Jackie Taylor said: “I went to wait in the waiting room as the doctors wanted to speak to us. They told us everything that they were doing. They thought it was Jonathan still and so did we.”

The medics told Jackie Taylor that she could see her son before he went for a scan and she told the inquest that after going into his room “I lifted up the sheet at the bottom. I looked at his feet and they were small. Jonathan is a size 11.”

She said: “I knew then that it wasn’t Jonathan in the bed. I rang Jason as he was on the way up. I said to Jason ‘it is not Jonathan’.”

Ms Taylor stated that Gillian Hogan had earlier that morning, at UHL, shown a photo of her son, Jonathan Healy “to the doctors or the gardai - I’m not sure which - either the garda or the doctors told her that it was Jonathan in the bed”.

Jason Hogan was still being treated for his injuries at UHL at the time and Gillian Hogan said that after she showed the photo she was told: “I’m very sorry there is no one here belonged to you and the best thing is to go home”.

Solicitor for Jackie Taylor, Gerard O’Neill told the inquest that “it is important for the family to know how Jonathan was listed as a survivor when he had passed away”.

Expert collision investigator, Sgt Kevin Burke of Henry Street garda station said it is his belief that the black Ford Focus car was going at least twice the 50kmph speed limit for the area when it veered over to the wrong side of the road and struck the footpath.

Sgt Burke stated that the car went airborne after striking a barrier at 87kmph, stating that it was most likely that the barrier ruptured the car’s fuel tank.

He stated that the car then struck a stone wall and became engulfed in fire. Sgt Burke said the driver applied little or no brake before striking the barrier.

A post mortem found that the blood alcohol level in Mr Hogan's system was 375 mg of alcohol per 100 ml of blood - well in excess of the legal alcohol limit for driving.

The post mortems found that the two men died of severe head injuries consistent with being in a road traffic accident. The two men had to be identified through DNA samples.

The post mortem for each man found no evidence of soot in their airways showing that they were both dead before the car became engulfed in fire.

Delivering her verdict, Clare County Coroner, Isobel O’Dea found the cause of death for each deceased was in accordance with the medical evidence.

Expressing her sympathy to the families, Ms O’Dea stated: “I know today has been very traumatic for both families."

Ms Taylor declined to comment after leaving the inquest.