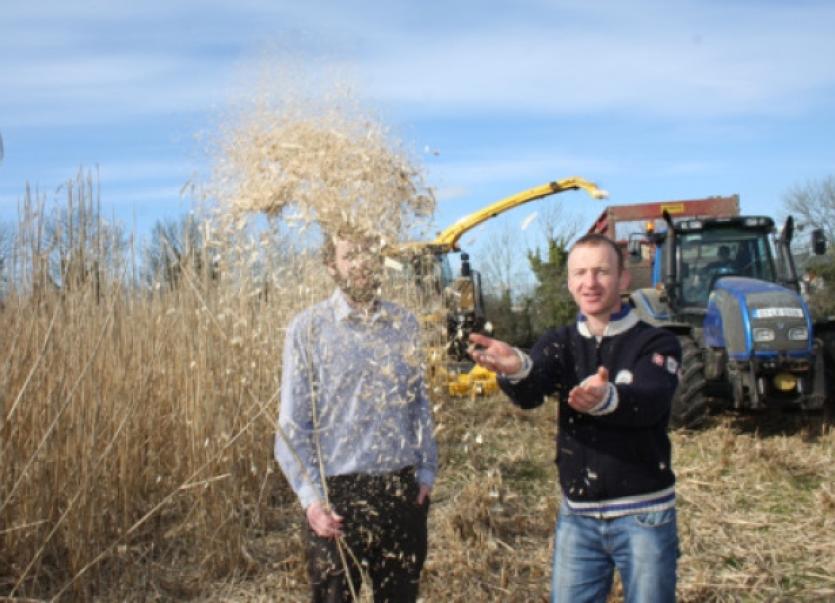 DESPITE the bad weather in 2012 and 2013 around 40 growers in the greater Limerick area are ready to harvest miscanthus.

DESPITE the bad weather in 2012 and 2013 around 40 growers in the greater Limerick area are ready to harvest miscanthus.

Commonly known as elephant grass, it is native to South East Asia and is an environmentally friendly crop. It has many uses including being burned in power stations to produce electricity.

A couple of years after being planted it is guaranteed to produce a crop every year for over 25 years.

The pioneer was Joe Hogan, managing director of JHM Crops in Adare. He grew the first commercial crop in Limerick in 2004. Since then it has grown in popularity and JHM Crops is the largest miscanthus biomass company in Ireland with around 70 per cent of the 6,000 acres of the crop under contract to it in 18 different counties.

Ronan Madigan, communications director JHM Crops, says miscanthus is a very robust crop that can tolerate difficult weather conditions. Despite the weather in recent months, crops are yielding as expected, and have not suffered any setback.

“The 2013 harvest cannot begin and the whole miscanthus industry faces collapse because energy companies like JHM Crops Ltd cannot continue to sustain the current losses, because Government policy announced over six years ago still has not been implemented,” said Mr Madigan.

“The biomass industry was underpinned by the commitments in the Bioenergy Action Plan in 2007 in three parts: incentives to grow energy crops, an outlet to convert the biomass into renewable electricity and a viable price through REFIT (Renewable Energy Feed In Tariff).

It is a support scheme to encourage the growth of such industries, in acknowledgement of the prohibitive up-front costs associated with renewable energy technologies.

“The crucial third strand of a viable price, which was set by the Government, still hasn’t been delivered upon,” he claimed. Mr Madigan says energy companies like JHM Crops Ltd cannot continue to sustain the losses incurred delivering renewable energy crops “from field to furnace” with a current price which is almost 50 per cent below the recommended REFIT price.

“The miscanthus industry is not looking for any special treatment. Tariff support is the norm in renewable energy projects all over Europe, and has became EU policy in their Biomass Action Plan as far back as 2005. This was underpinned by the Irish Government in 2007, but has yet to be implemented,” said Mr Madigan, who called on the Minister of Energy to “immediately implement what has been the Government’s, and his own department’s policy, for over six years”.

There are around 100 jobs associated with the industry nationwide. As well as Limerick growers of elephant grass watching crops in their fields when it should be harvested, there is also a cost to contractors. “Miscanthus harvest has created a new season of work for contractors. It is a comfortable fit as the crop is harvested with similar machinery to maize,” said Mr Madigan.