CAOIMHE O’Donnell has surmounted many obstacles in her young life so climbing a hill for Jack & Jill was a piece of cake.

The indomitable six-year-old and parents Claire and Patrick led 50 brave souls up to Darby’s Bed, upon a hill, in Galbally.

See more below or click 'Next' or 'Prev' for more photos. 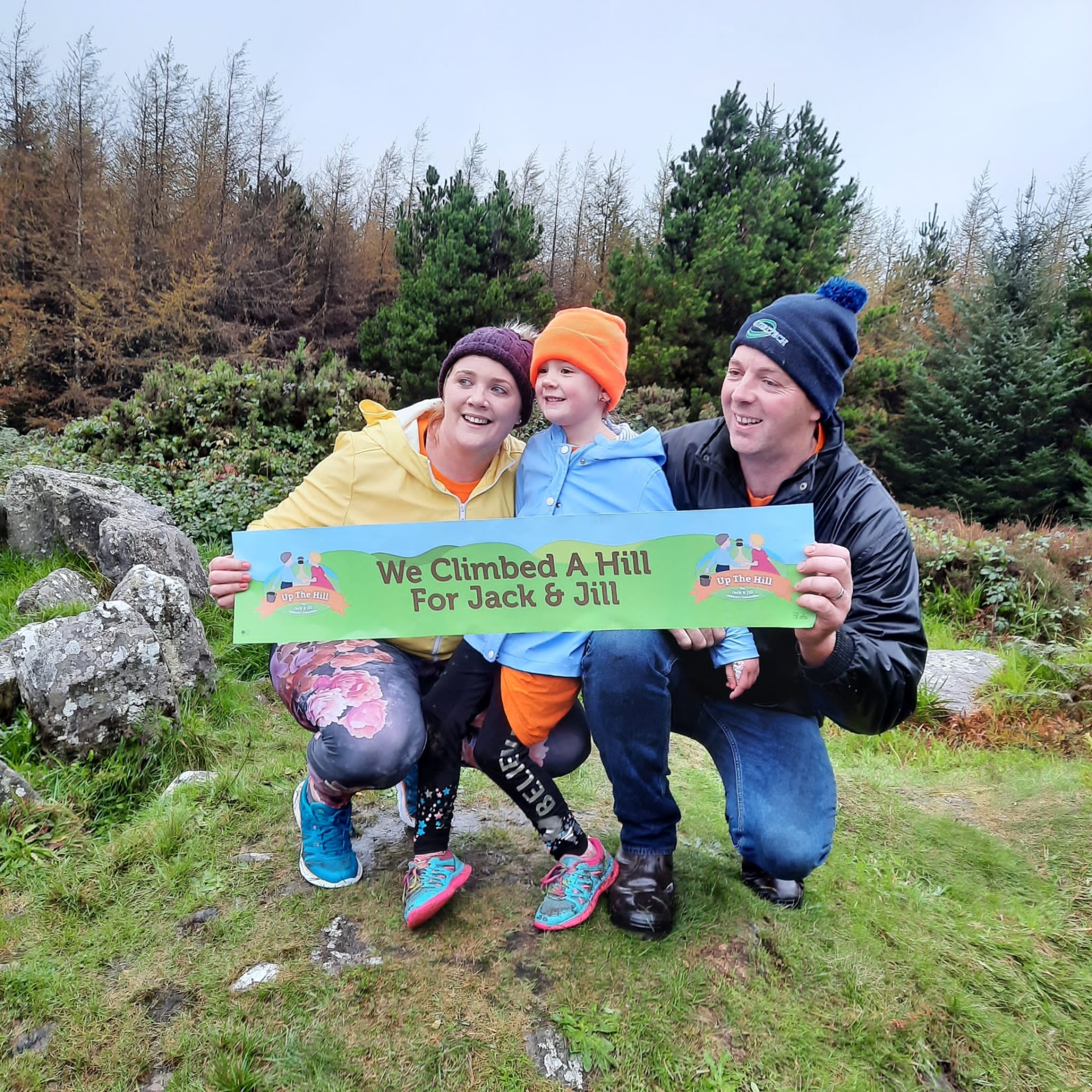 Despite horrible wet and windy conditions on October 31 they all completed it to raise money for the charity that supports children like Caoimhe.

Mum, Claire said she and Patrick welcomed their “miracle” into the world on October 16, 2015. It was a high risk pregnancy, much of which Claire spent in hospital but Caoimhe was born healthy and well.

“Everything was perfect and Caoimhe developed well and accordingly until August 2017 when we first noticed symptoms and had concerns – the appointments and hospital visits started then,” said Claire, originally from Knockane.

In the last four years Caoimhe has had two operations on both her eyes, and brain surgery for a growth that had doubled in size from one MRI to another in under 12 months. However, this didn't cure all her symptoms.

Caoimhe developed seizures, first vacant blackout type ones which then developed to generalised seizures, which are still uncontrolled on many anticonvulsant medicines, explained Claire.

Her daughter was diagnosed with Jeavons syndrome, which is a rare form of epilepsy, as well as uncontrolled generalised epilepsy.

“Caoimhe has been to Great Ormond Street Hospital in London twice and the progression in her brain is still baffling doctors. She is awaiting a new trial but due to Covid, this and other important appointments have been delayed,” said Claire.

But despite all Caoimhe has been through on top of daily pain and nightly seizures she always has a smile on her face and is very determined in everything she does. She is very sociable and outgoing and has great friends including her “bestie” Ellie Fraher.

“She is attending her local school in Galbally with a full-time SNA. She loves school, her teacher and her SNA. All the staff there are amazing to her. She recently wrote her name for the first time which was a huge accomplishment for her,” said Claire.

The Jack & Jill Foundation entered the O’Donnell's lives in 2019 after Caoimhe spent long periods in Temple Street and Cork University Hospital. A liaison nurse from Jack & Jill, Mags Naughton, called to the O’Donnell's at their Galbally home and a home care nurse started with the family.

After having her own health scare, Claire said their nurse Esther O’Riordan has become part of the family.

“In the uncertainty and stress of me becoming unwell, Jack & Jill became more invaluable than ever to us and there aren’t enough words to describe this fantastic foundation, every one of their staff are so nice and what they do is just outstanding. In the words of Caoimhe, ‘Esther, my nurse, is the best nurse in all the land!’,” said Claire.

Despite all they have been and are going through they wanted to give something back to Jack & Jill, which provides in-home nursing care and respite support for children up to the age of six.

“We decided to walk the historic path up to Darby’s Bed. The charity runs a fundraiser called ‘Climb a hill for Jack & Jill’ each year so we chose our hill in Galbally and set up a Just Giving page. Around 50 people turned up for our walk despite horrendous wind and rain on the day. Afterwards we had food organised and ladies to serve it in the community hall. Even though we were all wet and frozen there was a lovely atmosphere,” said Claire.

She said that Jack and Jill gets 19% government funding to pay their nursing staff and the rest is dependent on fundraising.

“It is an honour to have had such a successful fundraiser as our farewell and thanks to this organisation,” said Claire, who on behalf of Patrick and Caoimhe expressed a heartfelt thanks to all who have supported it.

You can still donate online here.