Community out in force for text alert launch in Doon 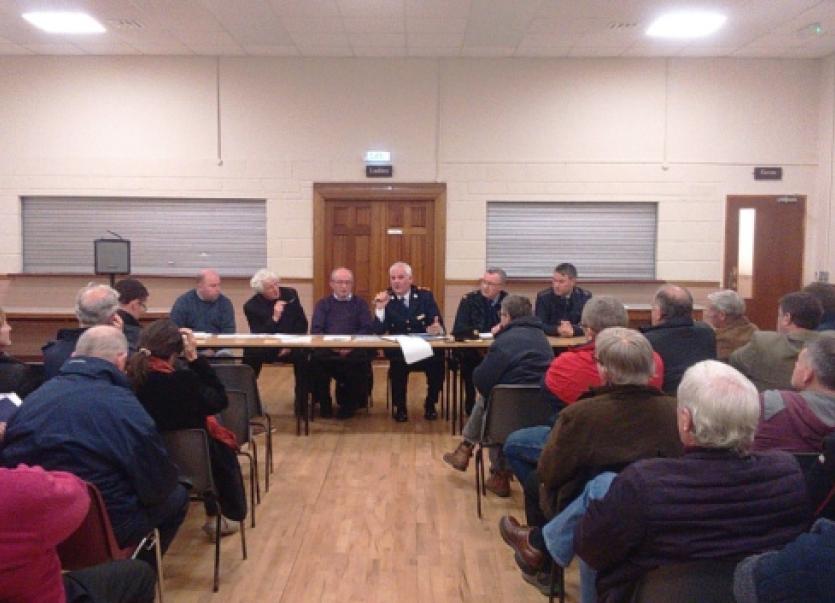 THE VILLAGE of Doon has endured “bursts of serious crime that rocks the very heart of what a community is about”, commented Limerick’s most senior garda at the launch of a text alert scheme in the locality.

THE VILLAGE of Doon has endured “bursts of serious crime that rocks the very heart of what a community is about”, commented Limerick’s most senior garda at the launch of a text alert scheme in the locality.

The east Limerick area has come under attack in recent months with a number of break-ins and incidents of property damage at local farms.

The launch of the text alert scheme comes three months after the tragic death of Doon native John O’Donoghue, 62, who suffered a heart attack on encountering two intruders in his Toomaline home in late August.

“I don’t know what it is about east Limerick – when tragedy strikes, it strikes in spates,” said Chief Superintendent David Sheahan at the launch in Fr McGrath Hall, Doon.

“Doon is a relatively quiet, rural district that has certainly shouldered its fair share of bursts of serious crime that rocks the very heart of what a community is about.”

Chief Supt Sheahan sympathised with those affected by these attacks.

“It is hard for any farmer to tolerate one hay barn going up in flames, let alone three in the space of a couple of days.”

“It is easier to solve some crimes than to get over the fear of them. Sometimes the fear is a bigger issue than the crime itself”, he added.

Outlining crime statistics, Chief Supt Sheahan went on to give a snapshot of this year’s crime rates in the Bruff garda district.

“In the main, the news is good,” he pointed out. “But it does not take away the perception, and the fear that’s out there. No matter what I say or do about those figures, every crime that happens is a crime too many.”

“It is easier to solve some crimes than to get over the fear of them. Sometimes the fear is a bigger issue than the crime itself”, he added.

The chief superintendent commended the local community on their efforts to tackle crime alongside his team of gardai. “The show of strength here tonight and the support you have given not only me but other members of An Garda Síochána has been without question.”

“All any of us want to do is to live and let live and unfortunately if that’s taken away from you, it’s very hard to get back. It’s all about confidence.”

Superintendent Sheahan acknowledged that the main objective of Doon’s Community Alert group is for a permanent garda to be located in the parish, and vowed to put provisions in place to make this a reality in the near future.

“It is my intention that rather than those people not knowing their local garda, the garda will call to them on a regular basis just to see are they OK, or are they in need of anything.

“I am a firm believer that community policing is the way forward. Even in the city, in the hardest of communities, community policing has been, in my view, an undervalued asset to the way in which the city has changed”, he added.

Speaking on the addition of the text alert service to the community, he said: “The enthusiasm with which text alert was taken up in this community has absolutely astounded me.”

He said he is looking forward to seeing how the text alert is going to work within the community, and stressed the importance of keeping an eye out for the unusual.

“I cannot stress this enough,” he said. “If you see something out of place in Doon, you can rest assured it probably is out of place. Don’t walk by and ignore it. Please take down whatever information you can and do not be afraid to pass it on. It is only a phone call to us.”

He concluded by showing his appreciation of the community’s dedication in setting up the service.

“We’re all in this for the one thing – a safer community. End of story.”

Also speaking at the launch, Fr Tony Ryan, PP, lamented the loss of the days when the community felt secure in their homes.

“Ireland has changed so much in recent years when you think of how every single front door could be left safely open. If any crime did occur, we could turn to our local garda and be assured of their presence,” said Fr Ryan.

“All of these things have caused so much distress in our community. We think of our elderly and the loss of their peace of mind that they are entitled to. Every dog that barks, every car that passes at night, I’m sure poses questions for them,” Fr Ryan said, before expressing his gratitude to the members of An Garda Síochána for their support during the spate of attacks and their help in setting up the Doon Community Text Alert service.

Also present at the launch was the acting superintendent in the Bruff garda district Inspector Luke Conlan and Sergeant Ted Riordan.

The text alert service provides an efficient, cost-effective way of aiding communication between communities and their local garda stations. It is operated by An Garda Síochána with the support of Muintír na Tire, Neighbourhood Watch and the Irish Farmers’ Association.

Members of the public use a widely advertised phone number to contact gardai should they see anything out of place. The information is then verified by gardai who will then decide if the alert system should be utilised. A text or email is sent to each registered community contact in the garda district who then forwards the message to their community group to advise the public to keep an eye out for the activity and to report any developments.

Text Alert Scheme application forms are available from Doon Post Office and other local businesses and must be returned to Doon Post Office when completed. The initial cost of receiving texts is €10 for a full year (texts cost €0.06 + VAT).

Other local initiatives put in place to protect the community were discussed at the launch night, including the Senior Alert Scheme, which aims to provide the elderly population of Doon with a sense of security in their homes through personal alarm systems. Equipment for the scheme, including the personal alarm and pendant are funded by Pobal and are made available via the community alert committee.

To enquire about eligibility for the scheme and for more information, please contact Michael P MacNamara on 0876764345 or email downtheroad9@hotmail.com

At the end of the meeting, committee chairman Jack Ryan acknowledged the immense support given by the gardai in not only dealing with the crimes but in working with the community in getting it back on its feet with the text alert service.

“I would also like to express my sincere thanks to the committee who have worked so diligently in order for us to reach our target,” he added.

He concluded by thanking other volunteers within the community as well as Doon Community Council for the facilities used in meetings.