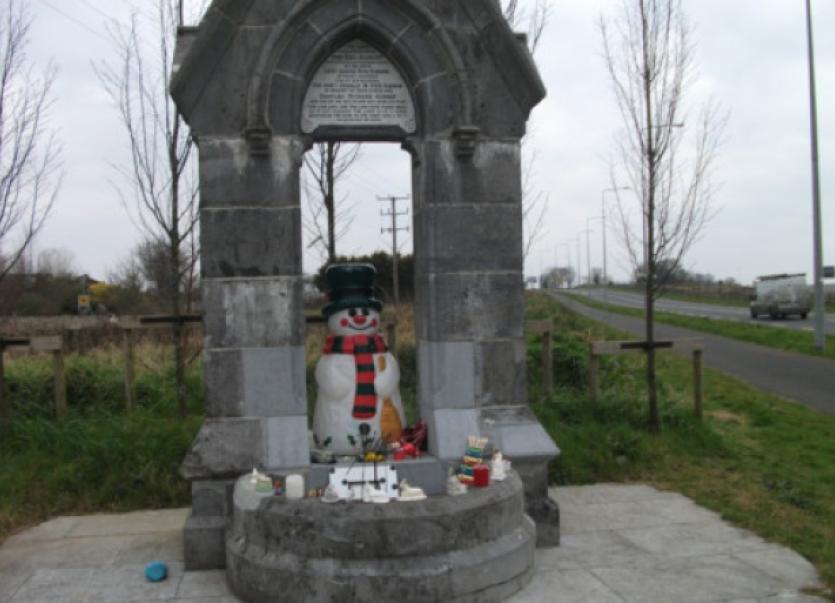 THIS SPRING has been one of the coldest on record but hardly chilly enough for frosty the snowman.

THIS SPRING has been one of the coldest on record but hardly chilly enough for frosty the snowman.

Lisnagry residents have already been wondering about the strange appearance of items at the FitzGibbon monument.

The Leader ran a story about toys, religious figurines and candles being placed at the base of the memorial in January.

Paddy Tuohy, of Castleconnell Historical Society, said everyone is mystified at who is putting the items there, and especially the latest arrival.

â€œI happened to be driving into Limerick city early on Good Friday around 7am. I was driving down that road and I always give a look at the monument.

â€œEverything was gone, all the angels, toys etc and I was delighted,â€ said Mr Tuohy.

â€œI was coming back from Limerick at 9am and there was a life size snowmam in the archway.

â€œIt was as big as a 16-year-old boy with a black hat and scarf with all the figurines back around him,â€ said Mr Tuohy.

Immediate thoughts turned to an April fools day prank but that was on the following Monday. It had been taken away by then.

The figurines started appearing at the foot of the FitzGibbon monument in Richill, Lisnagry in January. It was reinstated there from its original location at Carrowkeel in October, 2011. It was dismantled in 2001 as part of the construction of the Limerick Southern Ring Road.

â€œThere is no religious significance attached to the FitzGibbon monument. Nobody knows who or why they are doing it.â€ said Mr Tuohy.

But one thing he does know is that locals donâ€™t approve.

â€œThey are annoyed. People have come to me, they donâ€™t like it and I donâ€™t like it. It looked like an off colour snowman that is put on the roof at Christmas time.

â€œThey are not impressed and feel it might turn into a raggy tree. They are worried that more and more statues and items will be placed there.

â€œThat monument is the only bit of the FitzGibbon clan that is left now around the area, â€ said Mr Tuohy.

The original pump was placed in Carrowkeel, on the southern side of the Dublin road, by John FitzGibbon of Mountshannon Estate, Earl of Clare.

He served as Lord Lieutenant of Limerick and was a one time governor of Bombay. The original well was sunk on the Dublin-Limerick road for the benefit of his tenants just north of where Finneganâ€™s pub is â€¨now.

His niece, Lady Louisa FitzGibbon, and her husband Gerald N FitzGibbon, renovated the pump and erected the memorial over it in 1875, in memory of their son, Charles Richard George. He died in 1870 of blood poisoning aged 21. Castleconnell Historical Society, Limerick County Council, NRA and Stone Age were all involved in the reinstatement project.

If you are the person who is placing the items at the monument and would like to explain the reasons behind doing it please contact the Leader on 061 214503.