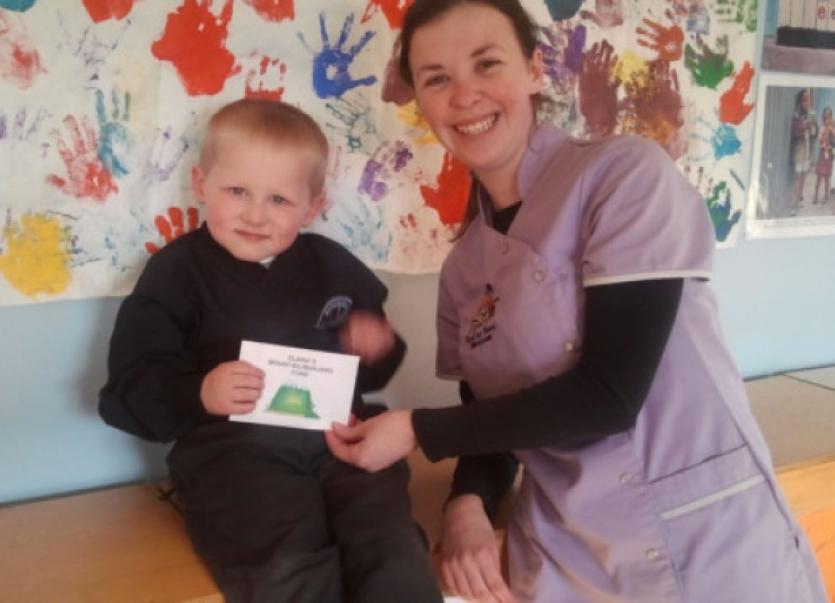 ELAINE Bourke hasn’t even set off for Kilimanjaro but she is already scaling the heights of her fundraising targets.

ELAINE Bourke hasn’t even set off for Kilimanjaro but she is already scaling the heights of her fundraising targets.

The 24-year-old Adare lady has always wanted to climb Africa’s highest mountain, and her dream will come true in July.

The staff member in Tots to Teens Banogue Community Creche has already raised over €2,000 two months before she evens goes to Tanzania

The money will go towards covering the costs of the Ian McKeever Kilimanjaro Achievers organised climb; create a natural garden at the side of the creche and two children’s charities.

“Because we work with children we wanted to support children’s charities.

“The first is the Rainbow Ward in the Regional Hospital in memory of Emily Daly, Croom, one of our Montessori children who passed away just over a year ago. “She is still in her hearts,” said Elaine.

They asked parents of children for their input and little Shauna - daughter of Trish and Pat Buckley, Bruree - was mentioned by many.

The 17-month-old was born with severe abdomen problems. Shauna has already had several operations and procedures in Ireland and England and due to the complexity of the condition will require follow up treatment for many years to come.

“Shauna and her mum came in to visit us. She is a lovely little girl - so bubbly and intelligent,” said Elaine, who has been amazed at people’s generosity.

“Children, parents, staff and businesses have been brilliant,” said Elaine.

Just one example is five-year-old Lewis Ferguson, who had his birthday party in March.

As part of his birthday wish list he asked all of his friends who were attending his party if they could make his present smaller, but to donate some money to Elaine’s efforts.

Lewis’s parents, John and Jeanette, matched the amount he raised and €150 was given to Elaine. Other fundraisers are a bag pack in Tesco in the Crescent this Saturday, Great Limerick Run and Elaine’s uncle is donating a bullock to be sold in Kilmallock Mart.

Amanda Jordan, creche manager, said they are all very proud of Elaine and all the hard work and training she is putting in to making a success of this venture.

“I think it is heart-warming to hear of all the positivity that is so evident here when we are surrounded by such doom and gloom on a daily basis by the news,” said Ms Jordan.

Log on to Banogue Community Creche’s Facebook page for more information on Elaine’s dream to climb Kilimanjaro and how to donate to the expedition in memory of the late Ian McKeever.