Limerick girl donates hair, that had never been cut, to charity 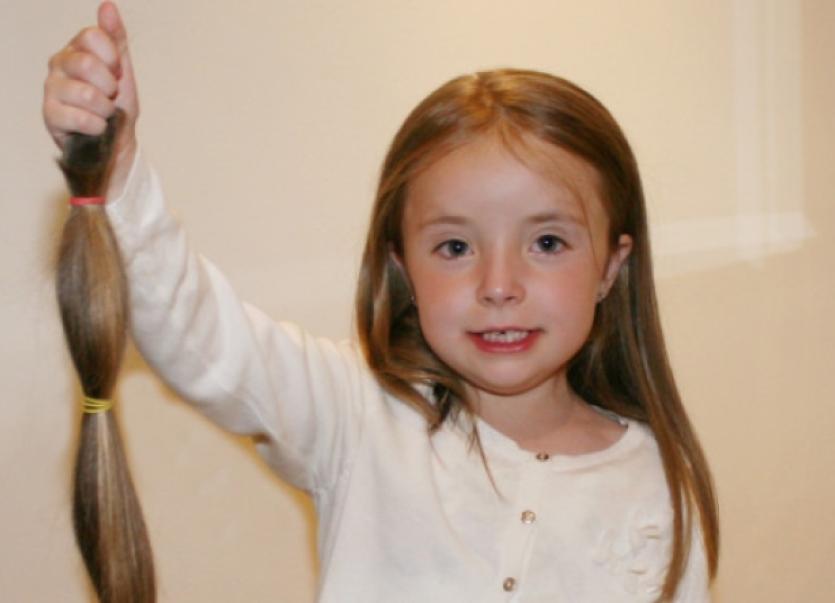 A GENEROUS six-year-old girl became one of the youngest ever children to donate her lovely locks to the Rapunzel Foundation this week.

A GENEROUS six-year-old girl became one of the youngest ever children to donate her lovely locks to the Rapunzel Foundation this week.

The charity collects pony tails to make natural hair wigs for those dealing with hair loss. But not only is Ali Mai Murphy, from Scanlon Park, Castleconnell, donating her hair, she also raised over €900 for the Rapunzel Foundation.

“I want to help little girls with cancer,” said kind-hearted Ali Mai, who is a big fan of the Disney film Frozen.

Her hair was measured at an incredible 18 inches long in Bellissimo this Wednesday.

“It is down to the back of my knees. I’m not going to miss it though,” smiles Ali Mai. It will certainly mean less washing and brushing for mum Liz Reilly!

“She always had a fine head of hair. She had a small little trim a few months back. It was never really cut, they just took the bare ends off it,” said Liz.

She jokes that if they had a euro for every time somebody complimented her daughter’s lovely wavy light brown hair they would be rich!

“Ali Mai is known for her hair. People were shocked when they heard she was cutting it. They mightn’t recognise her!

“I came across the Rapunzel Foundation and I mentioned it to her.

“She is very generous, always giving things to others and she said she would straight away. It is great to be able to help other people,” said Liz.

Dad Paul, older sister Shannon and brother Cillian are all very proud of Ali Mai, who was looking forward to the ‘chop’ in Bellissimo. And, of course, it will always grow back as nice as before.

Liz wished to thank all her family, friends and neighbours in Scanlon Park for their generosity. Sponsorship cards were handed out and they have collected an incredible €902.

Ali Mai, who is going in to senior infants in Lisnagry National School next September, also got a teddy bear before school broke up in honour of her generosity which will be deeply appreciated by the person who gets her lovely hair.