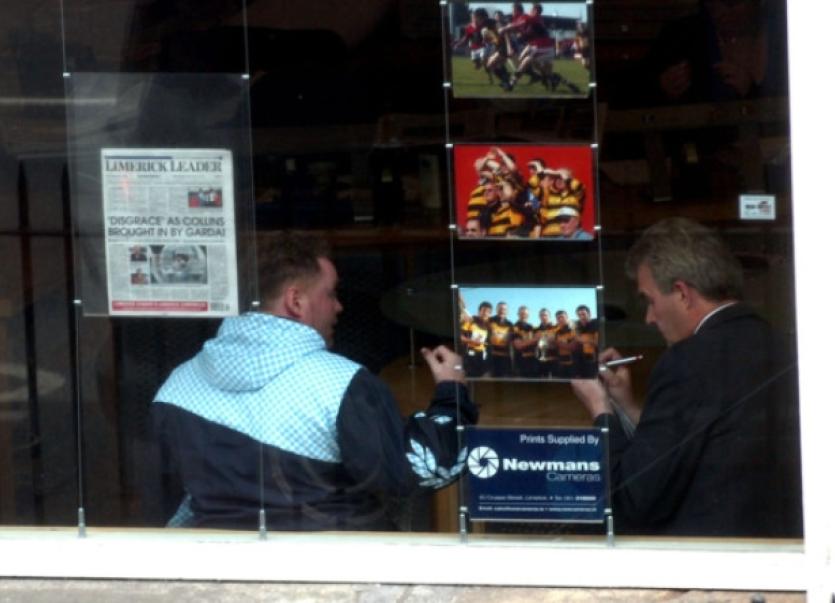 On a Monday morning in May 2010, five weeks after he’d gotten out of jail for threatening to kill a member of the Collins family, Wayne Dundon strode into the front office of the Limerick Leader in a very, very bad mood.

On a Monday morning in May 2010, five weeks after he’d gotten out of jail for threatening to kill a member of the Collins family, Wayne Dundon strode into the front office of the Limerick Leader in a very, very bad mood.

He had a serious problem with the paper that had gone on sale a few hours before. The front page was displayed in the window just behind him. ‘DISGRACE’ AS COLLINS BROUGHT IN BY GARDAI read the headline.

It was a report about how Steve Collins, the grieving father of the murdered 34-year-old Roy Collins had been questioned for three hours following a complaint by Dundon over comments in a TV3 documentary.

Dundon, with breathtaking audacity, claimed they represented a threat to his safety.

But that wasn’t what was bothering him now.

In the same edition, we had published photographs taken outside the People’s Park on the day of his daughter’s First Communion, for which a Cinderella-style horse-drawn carriage had been hired.

There was another shot of Dundon – supposedly unemployed – sitting in the passenger seat of an expensive looking car.

At first, I wasn’t sure what to do with him. His presence in the front office on a busy day wasn’t exactly good for business, but I wasn’t overly keen to take him somewhere more private either. He was visibly angry and his physical presence was menacing. I tried to calm him down and asked him to sit on the bench in front of the window so that we could discuss it.

After a while, his anger subsided. He seemed to have other things on his mind. As a journalist my instinct was to reach for some sheets of paper on the table beside us and start writing.

He raised no objection. In fact, the more I wrote, the more he opened up.

“I spent five and a half years in prison for something I didn’t do,” he claimed, referring to the night in December 2004 when he was convicted of putting a finger to his temple and threatening to kill Ryan Lee, Steve Collins’ adopted son, who had refused to allow Dundon’s 14-year-old sister Annabel into Brannigan’s pub on Mulgrave Street.

He started burning with indignation. He said he had video evidence that proved he’d been framed. He asked me to go back to his house with him, so that I could review this for myself. I declined.

He continued painting himself as a victim of injustice.

“From the time my car came up to the video camera, to when I parked, got out, took my sister and my wife to the door and then got back in the car was 13 seconds. Thirteen seconds. They said there was a confrontation, that I was shouting and mouthing and saying, ‘You’re f***ing dead’.

“What did I say? Absolutely nothing. I brought the videotape evidence to court and I was still convicted.”

His wife Anne was waiting outside. After 20 minutes she came in and asked him to take her home. He suggested she take a taxi – he said he’d see her back at the house. He wasn’t done talking.

He carried on for another half an hour. People came in and out – I wasn’t sure if they recognised him or not. Perhaps some did – in any case, nobody lingered out of curiosity.

Hardly surprisingly, he lied through his teeth when I questioned him about his involvement in the murder of Roy Collins, a crime for which one of his associates – James Dillon, the gunman acting on his orders – had just been jailed.

“Are you sorry for what the Collins family is going through?” I asked him.

I asked him why a junior member of the McCarthy Dundon gang like James Dillon – a virtual nobody in the criminal world – would take it upon himself to shoot Roy Collins in cold blood.

The thing that struck me most was his hatred for Steve Collins, the man who had shown courage beyond measure in standing tall and seeking to bring his son’s killers to justice, despite the appalling cost to his family.

He refused to buckle when Dundon tried to get at him over the Ryan Lee case, and his bravery ultimately led to key changes in the criminal justice system which helped to ensure Wayne Dundon’s conviction this week.

“Steve Collins doesn’t like me. He’s blaming me for killing his son,” said Dundon that morning in 2010, visibly tensing.

“I can’t leave my house in case Steve Collins sees me and says I threatened him again. All he has to do is say that and I get another 10 years.”

He knew, like we all did, that despite the conviction of James Dillon, the case was far from closed.

“I’ve never been charged with anything,” he said, speaking too soon.

“The trial is over. His son is dead 12 months, why is he still talking about me? I was in prison (when Roy was shot). It’s nothing to do with me. Steve Collins is interested in me, I have none in him.

“He’s going through a hard time. Everybody who loses a family member does, but can he not leave me and my family alone. Do I have to pay for other people’s sins?

“I’m very worried about the way the guards are carrying on with the Steve Collins affair, about what’s being said. It’s all innuendo, there’s no facts. I’d like Mr Collins and his vendetta against me and my family to be left alone.”

He clearly resented that Steve Collins was given the space in newspapers like ours to attack him, but it was the coverage of his daughter’s Communion which had “hit a nerve” and brought him to our door.

“Ye’ve been writing about me for years and I never once complained,” he said. “I’m fair game, I’ve been a bad person, I’ve done wrong things. Say what ye like about me. In for a penny, in for a pound.

“The papers in Dublin write whatever they want about me and my family. We don’t care about the tabloid papers but I don’t like seeing stuff like this in my local paper. Leave my daughter out of it. Keep it to me.”

It was exactly a year to the day since thousands of people had taken to the streets in Limerick, led by the Collins family, in a show of strength against the sickening gangland criminality that had left innocent men like Roy Collins and Shane Geogheghan dead. Cue more resentment and self-pity.

“Have I caused hundreds of thousands of people to lose their jobs? Why aren’t the bankers being put on the front page and singled out like me? They’re not lining up on the streets of Limerick, five thousand people, complaining about the bankers costing them their jobs.”

He had more vitriol for Limerick itself. The city to which he had returned after his time behind bars, he said, was “one depressing little place. We’ve the highest suicide rate in Europe. Everybody’s an alcoholic, everybody’s on tablets.

“Ask yourself, why is that? Because it’s depressing. Go out to 5B and ask why this is. My cousin threw herself off a bridge a couple of weeks ago. She was 17 years old.”

His claim that he had no interest in Steve Collins didn’t exactly hold water.

When I asked him why he had made the complaint that led to Roy’s father being interviewed by gardai – to widespread dismay in the city – still more resentment flowed from him.

“I made a complaint. I was entitled to do it. Why can’t every Joe Soap in the whole of this town get the coverage he’s getting?

Four years on, justice has prevailed, but not of the kind that Wayne Dundon was expecting that day.