A send-off befitting a humble Limerick priest of huge stature 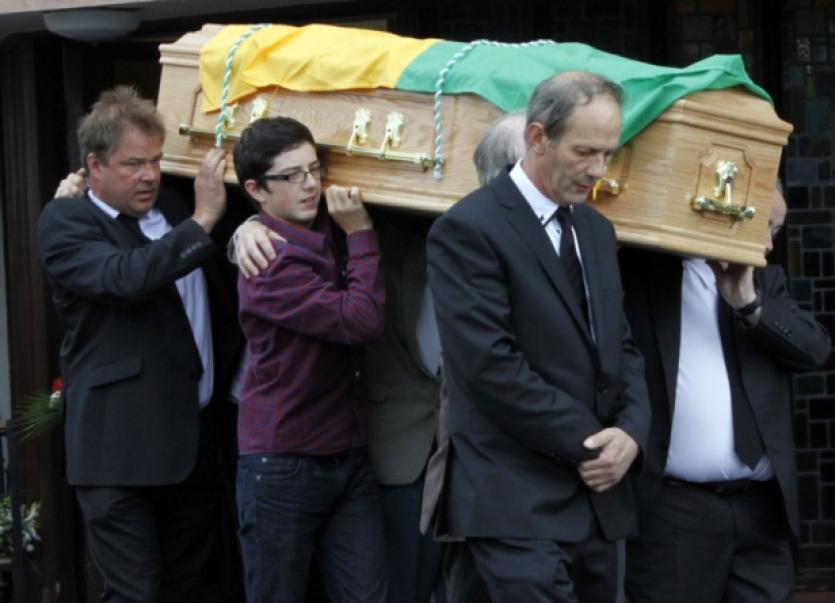 THE FUNERAL Mass of Fr Liam Ryan must be the only time a solicitor’s letter was read from the altar - but then again, the Cappamore priest was a true original.

THE FUNERAL Mass of Fr Liam Ryan must be the only time a solicitor’s letter was read from the altar - but then again, the Cappamore priest was a true original.

Fr Liam’s brother, Fr Seamus Ryan said: “His solicitor tells me in the will he wrote that everybody who comes to the Mass must have a sumptuous meal and nobody must go away hungry.”

Fr Seamus played with Fr Liam when he became the youngest Munster hurling winning captain aged just 19 in 1955. That legacy will last as will the Professor Emeritus of Sociology’s decades in lecture theatres and his contribution to developing social policy in Ireland.

Quoting Matthew, Fr Seamus said “blessed are those who mourn”.

“We mourn only because we have loved someone. Those who have never loved can never mourn. They will miss one of the most precious things in life - to love and to have been loved,” said Fr Seamus.

On behalf of himself and his sisters, Mary T and Enda, he thanked the people of Cappamore.

“The one thing that has impressed me so much since I came back to Cappamore was the extraordinary number of people who came to remember our brother.

“We know he was liked but we are really astounded by people coming to the mortuary chapel from 5.30pm to 9.30pm. You could give no more wonderful gift to our family.

“We express our deep gratitude to Cappamore for cherishing him when he came back here first and after his stroke. You helped to nourish him with your love, care and concern - it was so palpable to him and to all of us. It brings tears to think of it.

“We want to say to the people of Cappamore, and yourselves too, what a wonderful people you are and how wonderful you have been,” said Fr Seamus.

After returning from Maynooth in 2003 Fr Liam assisted Fr Dick Browne, who had the difficult task of saying the homily at his great friend’s funeral.

“Fr Liam could talk to anyone, young and old alike. And he didn’t seek his own glory or his own advancement, which he could have, but he wouldn’t have seen any point in playing the game strictly by the book.

“I know the people here appreciated him greatly. To see him in recent times, battling his way in and out of graveyards for your loved ones was inspirational. It would want to be very bad for him to refuse you anything and that quality is in all our minds. Mary is a case in point yesterday, playing the organ for the confirmation,” said Fr Browne.

Anybody who met Fr Liam will recall his conversational skills and witty retorts.

“I remember about four or five years ago, Limerick were about to meet Tipperary and we were on the front page of the Leader clashing with hurleys. The Lord have mercy on Jimmy Lane, he said ‘ye were catching the hurleys wrong’. Liam said ‘Jimmy, tell me how to bless myself, tell me even how to say Mass, but don’t tell me how to catch a hurley!’,” said Fr Browne, to smiles, nods and laughter from the congregation. He described his great friend as a clever, learned and poetic man and spoke of the famous song he wrote about John Hayes.

“Fr Liam was a willing man, an able man, a class act, a stubborn man, an independent man. But I suppose if there wasn’t a bit of that in his psyche, he may never have captained Limerick and may never have won. I’m honoured to speak here today. If it was the other way around Liam would have no notes. It was amazing that his head could carry all it knew, his powers of retention were huge.”

“Liam, you fought the good fight, you finished the race, you kept the faith. Whatever crown you won with Limerick on the playing fields, you will receive a bigger crown now. You will be missed by many all over the place, you made many friends here, you will be missed by them all, and your family. And I will miss you. Thank you for all your kindness and your help. May you now have the contentment you deserve.”

The gifts brought to the altar encapsulated his life. The chalice symbolised the priesthood; a hurley for his achievements and love of sport; a scroll to represent his academic life; a globe for his enjoyment of travel and the history of Cappamore book to show his love of his home place and history. A flag of the Cappamore GAA colours was draped over his coffin. All the gifts were brought by young relatives. Nieces, Eimear and Eanna played the harp and flute beautifully.

Nephew, Liam said: “The final symbol of Liam’s life is the people here today. Liam was always someone who loved meeting people, telling stories, enjoying the fun. The people of Cappamore were very important to Liam.” Liam also read The Hurler’s Prayer.

“The light is not gone out, the candle is just extinguished because the dawn has broke,” said Mr Dillon.