Green Fingers: Getting to grips with a few summer projects 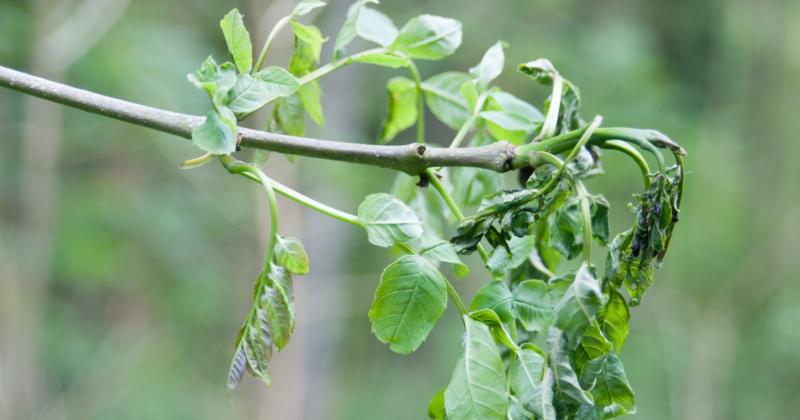 Ash dieback disease is spread by spores on the wind

IN OUR garden along one side of the boundary there is a hedgerow. The hedgerow fronts onto a public road. When we bought the house around seven years ago we had discussed pulling up the hedgerow and planting a nice hedge - but we decided against it. There is a standard formula by which you can accurately measure the age of a length of hedgerow. When we applied this formula to our hedgerow we discovered that it is more than 150 years old and so we decided to keep it.

Ash Die-back
Among our hedgerow there is a nice native Ash tree growing wild. Its not a very old tree - perhaps twenty years old. Recently the tree burst into leaf like it has reassuringly done so for years. In its leaves and branches it will provide food and habitat to insects and mammals well into the autumn. There may even be birds nesting in it right now. But there might be changes on the way. I have seen very clear evidence of what I believe is Ash dieback disease close to our house. I see evidence each day as I travel to and from work in some hedgerows along the public roads. The tell-tale signs are a lack of vigour throughout the tree.

You may notice some bare branches at the tips of the trees. You may also witness some of the leaves turn yellow and fall off in the spring or summer. In some trees it is more pronounced with entire branches affected. Eventually, over a few years, the entire tree will die. In a way, it dies from the outside in. It starts at the leaf tips and spreads downwards into the branches and then into the trunk and then roots. It will take several years to kill each tree.
Ash dieback disease is spread by spores on the wind. There is no known way to prevent it or to stop it spreading.
The Ash tree in our garden does not have the disease yet. But I am expecting that, at some point, I will witness it lose its vigour and start to die back. Although this will be a sad day I won’t be sad for long.
Other native species such as sycamore, hazel and whitethorn will fill the gaps. This is all part of the natural process. Some species thrive and some species wane.

What to do
The sale of Ash trees has been prohibited in Ireland now for several years. This was devised to prevent the spread of Ash dieback disease from commercial Ash plantations into the countryside-but this did not work. It may have slowed the disease down but it did not prevent it. The best practice is to do nothing. If you notice dieback on your Ash trees then there is currently nothing that can be done to prevent its spread. Do not prune or remove any dead or diseased branches as this may spread the disease. Instead, let the tree decay naturally and let it store its carbon. By letting the trees be and not use them for firewood, this is the best tribute we can pay to out native Ash trees.