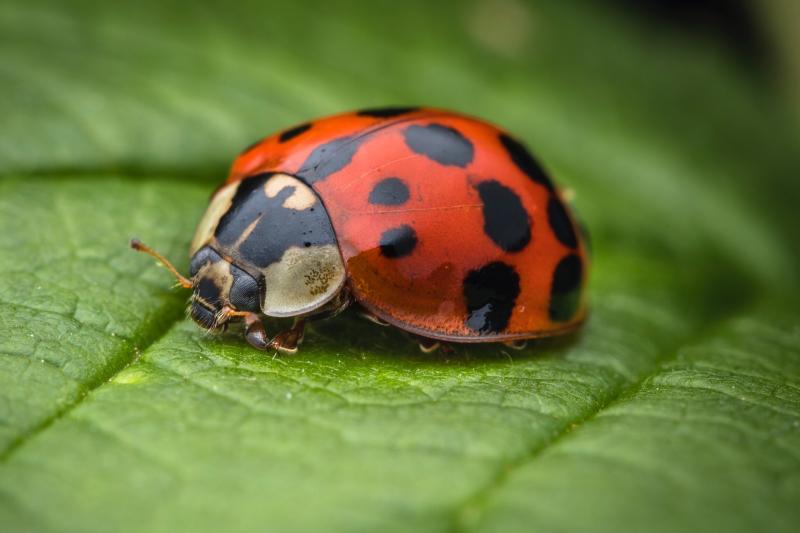 Great for gardeners one ladybird may eat over 4,000 aphids in its lifetime Picture: Pixabay

THE THUNDER showers slowly lifted as the morning drifted into the afternoon and like us, insects, were seeking shelter from the hazy downpour. As the rain pelted against the roof of the polytunnel I was glad to have plenty of indoor work.
As I waited or the rain to lighten so I could make a dash to the canteen for a cup of tea I noticed a flash of red in the tunnel. This was a cinnabar moth and it emerges during the month of May.
Earlier, with a group, we had found a pair. They were resting on the bathroom wall and this has a slight overhang that gave shelter from the rain.
The cinnabars were so brightly coloured the group thought they were butterflies and they found it hard to believe that moths could be so colourful. Also they were out in the middle of the day and moths only fly at night-time.
These are common misconceptions around moths. Many species are as colourful as moths and blend beautifully into the summer grasses and flowers. In autumn the moths that fly have deep browns and reds that match the changing season.
While the majority of moths fly by night many species are on the wing during the day. Walk through a wildflower meadow and you will see carpet moths. They fly fast and strong and drop down quickly and hide on the underside of a leaf.
In vegetable patches and especially strawberries you might across the large yellow under-wing. This has a dull brown colour but when it flies each wing-beat reveals flashes of yellow. A friend of mine who used to grow strawberries remembers finding dozens of these moths as they harvested the crop.

Back in the polytunnel I was watering the potatoes. Some of the flowers are out and this is a good indication that are nearly ready to eat.
I gently scraped away a little soil around one of the stalks to see how the potatoes were maturing. They are marble sized and they will do they main growing in the next few weeks. This is the key time to water any crop as it comes to maturity. Reguraly watering will ensure a good yield.
The potatoes have loads of foliage and it is a brilliant place for insects to hide. I found another cinnabar moth but its wings were all crumbled up. It was not damaged by newly emerged from its cocoon.
The wings need to be unfurled and pumped full of blood and this can take a few hours. The moth finds a sunny but safe position and this is a delicate and vulnerable time for the creature. It cannot fly to escape danger and is vulnerable to predators.
Just as I was finishing watering, a white butterfly flew up. It turned out to be a green veined white butterfly. These used to fly in their hundreds around the wet meadows near my house, but now most of the meadows have gone and so have the butterflies. The green veined white can have multiple broods during the summer.
The recent heat has warmed the soil and this has brought lots of growth of the lettuce and garlic. In these dry conditions a few aphids or green fly have started to appear. As the farm is organic and we don’t use pesticides we have to encourage natural predators.
I have noticed lots of seven spot ladybirds and the adults and the larva are natural predators of green fly. The polytunnel doors are left open during the warm summer nights and the ladybirds have no trouble finding their way in for a tasty feast.
The flowers of vegetables are also a brilliant source of pollen and nectar for pollinators. In one of my beds at home the sprouting broccoli has produced hundreds of small yellow flowers. There had been a string of common carder bumblebees visiting the flowers. This spring we have sowed a few extra vegetables and we are letting them go to flower and will record what insects visit them.