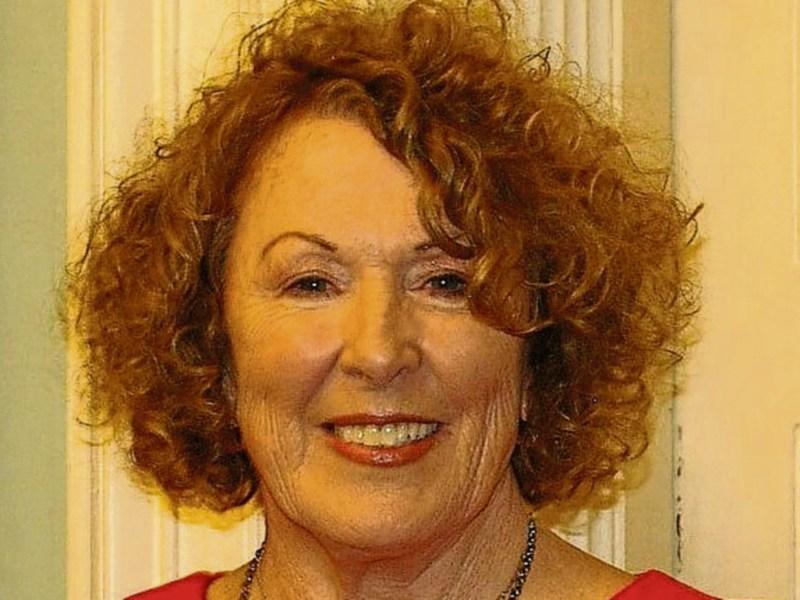 Frances’ grandfather Con Browner was a reporter at the Limerick Leader

Frances Browner’s poetry has been featured on Limerick’s Poetry Trail, Poetry Walls and ‘Bring your Limericks to Limerick’.

Although she grew up in Dublin, lived in New York for twenty years and now resides in Greystones, Co. Wicklow, her family connections with Limerick city are strong and her heart is very much connected with Limerick. Her poems have appeared in several magazines including The Ogham Stone (the University of Limerick literary journal). She has also had short stories and memoir pieces published and broadcast on radio.

Her grandfather, Con Browner, was born in Clare Street in 1894. Educated by the Christian Brothers on Sexton Street, he taught himself French and shorthand, and learned sign language to communicate with a cousin who was deaf and dumb. He became a reporter for the Limerick Leader; played hurling for Claughaun, and in 1917, joined the Volunteers, climbing the ranks to Intelligence Officer. In September 1922, he married Frances Lynch from ‘The Parish’, whom he met at a dance on Thomas Street. They honeymooned in Dublin, during the Civil War.

“He had to crouch down on the tram to dodge bullets, while bringing messages to a Franciscan priest who was moved out of Limerick for criticising the Black and Tans” says Frances, adding “For their first year of marriage, they hid a fugitive on the run from the Tans.”

In 1932 Con was appointed Manager of the Anglo Celt newspaper in Cavan so he moved his family up the country. Five years later he was involved in a car accident on the way home from refereeing a National League football game. As a result of this accident he lost his hearing, and after months in hospital, lost his job.

Mr Browner returned with his wife Frances and six children to Limerick where he worked in O’Mara’s bacon factory as a bookkeeper. He was one of the founding members of the Gaelic Grounds, but his name is not on the plaque, perhaps because two of his four sons played rugby!

Frances’ father, Connie Browner, was born in 1927 in Limerick. When the family moved to Cavan, he stayed behind in Athlunkard Street with his Granny Lynch and Aunt ‘Nan’. Also educated at CBS, Sexton Street, he was a boy soprano for their Gilbert & Sullivan operas and played Nanki Poo in the Mikado in 1945, which was also staged in the Lyric a year later. He sang in the Savoy Cinema every Saturday at the interval, “his mother and grandmother cheering him on” says Frances.

Connie passed the Leaving Cert with the highest marks in Limerick and was granted a scholarship to UCG, where he studied engineering. He came home to Limerick every weekend to play for Young Munster and then for Shannon’s first senior team 1953/54. In the meantime, he met Sadie Bell when he was working for the ESB in Offaly, proposed after six weeks, married within a year, and then transferred to Cork, where Frances was born.

Frances Browner was born in Cork on Bloomsday (16th of June, 1954), the date that this now well-established literary festival was celebrated for the first time, when Patrick Kavanagh and others, met at the Martello Tower in Sandycove to retrace Leopold Bloom’s footsteps through Ulysses. Frances has been and continues to be active in these celebrations. Three months after her birth her parents left Cork and embarked on their own odyssey to Donegal, Offaly and Sligo, before settling in Dublin in 1962, the year the Tower was renamed the Joyce Museum. Growing up in Glenageary she was a stone’s throw from Sandycove.

Browner was always good at English at school. Her fourth-class teacher, Mrs. Griffin, used to give them a composition every weekend. One week, the title was ‘What I would do if I won a hundred pounds.’ Frances wrote that she would bring the whole family on a holiday to Kilkee. Mrs Griffin ran into the classroom on Monday morning, beaming with delight. It turned out she was from Kilkee and her husband, Paddy Griffin, from The Parish!

Frances came second in the National Dairy Council essay competition and was disappointed not to win, as the prize could be a camera or a tennis racquet, both much coveted. In sixth class, she was put forward for a scholarship to Secondary School and received one for a Holy Faith Convent close to Dublin City. The Reverend Mother later told her it was because of her essay that she had been successful. In Intermediate Certificate class, Sister Raymond used to have her read Pride and Prejudice aloud, “Because you put so much feeling into it” she said. Upon finishing school, Frances took a Commercial Course, and her first job was in the Bank.

Granddad Browner spent every Christmas with them and his summer holidays too. “We were the only children in Ireland who wrote to two Santas, the Dublin, and the Limerick” says Frances. He also helped her with shorthand and was “thrilled when I got a ‘job for life’” says Frances.

After a year, Browner left the Bank and joined Aer Lingus, as a clerk-typist in Dublin Airport. “For 10% of the fare, I would fly down to Shannon for fifty pence. It cost more for the bus into Thomondgate where I spent many weekends with Auntie Maura and her husband, Tom Cross” she remembers with some amusement.

She also recalls dancing in the Two-Mile Inn, and the Stella, and Ballynanty Rovers Soccer club. When aunts and uncles were home from England or America, there were more parties.

Five of her father’s six siblings emigrated. As a child Frances would root through her grandfather’s tin box for photographs of far-away American cousins. “Courtesy of Aer Lingus staff discount, I visited them all … Uncle Michael in Miami, Auntie Phil in Philadelphia, Auntie Betty in California, Uncle Eamonn in Canada, and Uncle Paddy in England. And after all that, I quit Aer Lingus too” says Frances.

Browner wanted to experience living somewhere else, so she headed off to Paris as au pair for two years. That’s where her bohemian spirit came alive, studying French, frequenting folk clubs, hitch-hiking, and touring Europe in a Camper Van. That’s when she got the yen to go to College. She came home, completed a Degree in English and History in UCD, went to New York for the summer of 1987 and stayed for twenty years!

There, she waitressed, taught High School, drove the Pink Tuna taxi in Montauk, started writing during her breaks, and one winter took a creative writing course in the local High School. Her first story was The American Parcels, “Which we received from my Dad’s Auntie Nan Lynch, who had left Athlunkard Street in the 1960s.

The story was published in the East Hampton Star and Nan, retired back in Limerick, was thrilled. Parts of the story were quoted by Uncle Paddy in his eulogy at her funeral. The Shannon flag was draped over her coffin, as Nan’s father, Paddy Lynch, Frances’s great grandfather was co-founder of the Club, and its first Captain. Denis O’Shaughnessy included extracts in his Stories of Limerick.

While working in the Aisling Irish Community Centre in Yonkers, Frances compiled a book of immigrant memoirs, While Memory Brings us Back Again.

Returning home in 2006, Frances wrote several short stories that were published and shortlisted for competitions, and had memoirs broadcast on RTE’s Sunday Miscellany and Living Word, including ‘The Veil’ about Auntie Betty’s Limerick lace communion veil, also worn by two of her cousins in New York, her younger sister, Maura; worn by Betty again on her wedding day and by her daughters on their wedding days in California.

Frances self-published a collection of the stories and memoirs, You Could’ve Been Someone, and included some poems written at a workshop given by Dublin poet, Colm Keegan. The reaction inspired her to take an online poetry course with Kevin Higgins in Galway. Her first poem, ‘Minefield in Korea 1953’, based on her uncle Michael’s experience, was published by Ogham Stone in January 2016. The launch was in the People’s Museum of Limerick.

On January 16, 2020 she returned to the same venue to launch her collection of poems, Roots & Wings (Revival Press), Limerick. She had come full circle.

You Could’ve Been Someone and her history of the Browner/Lynch family, Remember me to Inquiring Friends are available at Limerick City Library in the Granary. She had a line in the ‘Limerick is …’ collaborative poem 2019, “Limerick is skirts and kidneys, and eye-bones with Granddad and Maura in O’Dwyer’s Villas.”