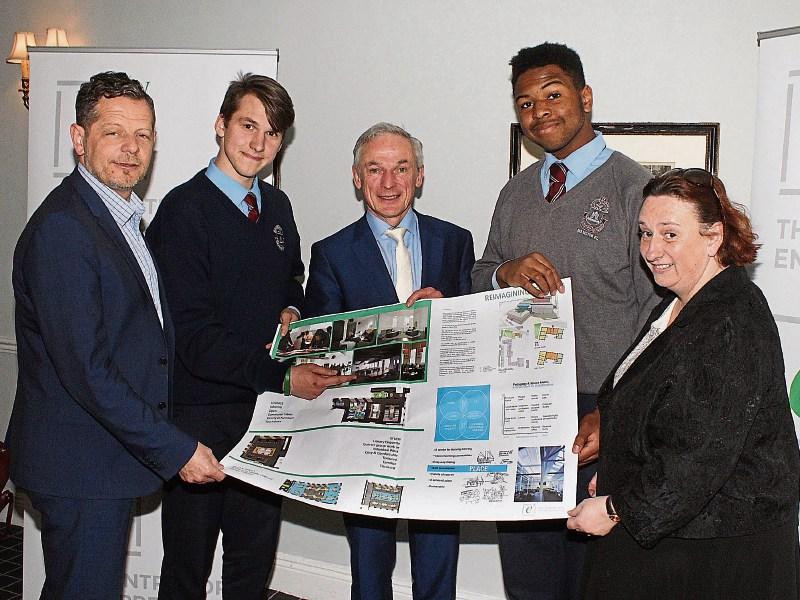 IN 2007 two young Limerick brothers founded a company called Shupa. In 2010, one of the brothers, a 16-year old student at Castletroy College went on to win the Young Scientist Award.

At this stage they had already merged with a company and eventually sold their shares for approximately €5million.

What they did next has since placed them in the Forbes list of billionaires.

The Collison brothers are on the crazy end of success in entrepreneurship. Their achievement doesn’t happen every day. However, their story is an important one. They were two young boys with exceptional intelligence and exceptional ideas. They both proved that ‘kids’ these days really can achieve anything.

Last Friday I had the pleasure of being part of a team that officially launched the creation of Ireland’s first Centre for Entrepreneurs which will be based on the grounds of CBS Sexton Street in Limerick.

The idea is very simple. Create a co-working space on the campus of a second level school and allow entrepreneurs to work there.

Next, create an educational programme that delivers hands-on entrepreneurship training to kids at secondary school level.

Finally, allow those kids to interact with the entrepreneurs working in their schools; let them hop ideas off each other; let them try; let them fail; try again and see what the outcome is.

So much importance is placed on the need to attract FDI (foreign direct investment) to our region in order to ensure we have continued job creation. Look at those employing people across Limerick and our reliance on FDI becomes clear.

We also know the impact that losing one of these employers can have on the region.

We are getting to a point where more focus is now being placed on creating an environment where indigenous entrepreneurial businesses are supported, respected and encouraged.

The launch of the initiative at CBS Sexton St (branded - ‘eN The Centre for Entrepreneurs’) was inspiring. Yes, we held a fundraising dinner on Friday night. Yes, we had the usual press photocall.

What stood out most for me was a subtle one-hour introduction to entrepreneurship which was delivered at the school by Gillian Barry of LIT.

The workshop had a simple brief – to show kids at the school that entrepreneurship is everywhere.

The students were encouraged to start to develop an entrepreneurial mind-set and to understand what that means as well as taking some key tools that every innovator needs to begin the start-up journey.

Watching the kids in action was inspirational. They were creative. They were engaged and most of all they interacted with each other in a fun way.

The ideas that emerged clearly demonstrated the unique approach that young people take to solving problems.

What I witnessed on Friday was a group of young people studying in an inner city Limerick Deis school.

This is a school that has struggled over recent years in terms of attracting numbers and in its perception. All this despite the school being one that has sent some of our city and our country’s best entrepreneurs out into the world.

What I also witnessed on Friday was a group of young people who were no different than any other. They were creative. They were bright and they were ambitious. Like every young kid in this country they deserve to be sent out into the world with a belief that anything is possible.

Speaking in Limerick on Friday Minister for Education Richard Bruton said: “Creating a stronger focus on entrepreneurship, creativity and innovation in our schools is an important part of the Action Plan for Education, which aims to make the Irish education and training service the best in Europe within a decade.

“As the project evolves the school can act as a model for boosting and nurturing entrepreneurship in both primary and post-primary education across Ireland, as well as providing a platform for alumni of those schools to start their own business.”

Not a bad endorsement.

Think of our city. Every butcher, baker, plumber, cleaning firm, shopkeeper, café owner or painter is an entrepreneur.

What ‘eN The Centre for Entrepreneurs’ will do is to inspire our young population to believe that creating their own job and creating a job for someone else in the process is possible.

What the centre will do is to make these kids recognise that no idea is a bad one. The centre will allow them make their mistakes when young but most importantly learn from those mistakes at an early age.

‘eN The Centre for Entrepreneurs’ is in its infancy but I believe that Limerick is being presented with an opportunity to develop a unique pilot project that has the potential to change how we educate our younger generation.

As the project develops Limerick really could be home to the creation of some of the leading Irish entrepreneurs of the future.