Limerick city 'seeing revolution in how it perceives itself' 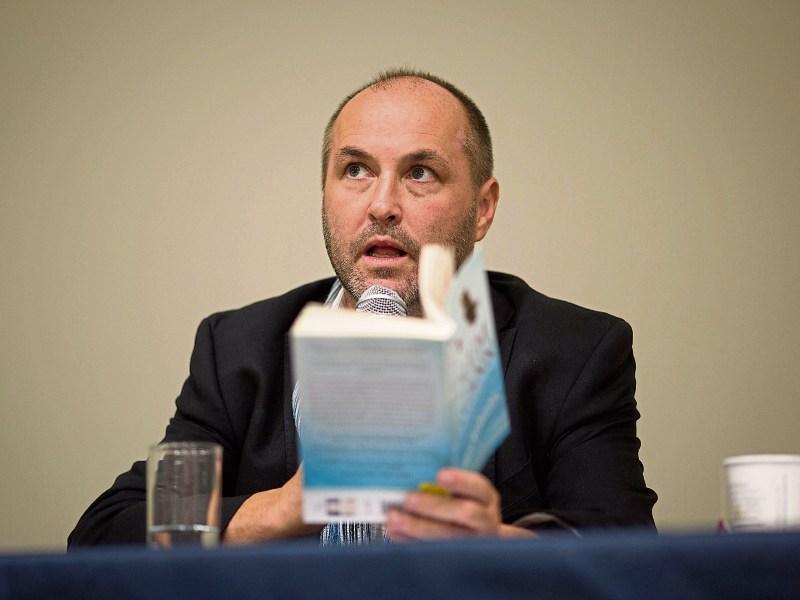 THE internationally acclaimed and award-winning author Colum McCann has described Limerick as a city that is witnessing a “revolution in how it perceives itself”.

McCann is the co-founder of the non-profit global story exchange organisation, Narrative 4 which officially opened in Limerick in 2016.

The author was speaking in Limerick last Friday night where he hosted a special literary celebration as part of Nollaig na mBan at the Narrative 4 headquarters on O’Connell St.

Attendees at Friday evening’s event were treated to a special reading of excerpts from James Joyce’s famous short story ‘The Dead’ by young participants of the Narrative 4 programme.

Speaking at the event McCann said: “We embarked on the Narrative 4 journey just over three years ago. We continue to spread our reach to countries such as South Africa, Mexico, Palestine, Israel, Costa Rica and the US.”

McCann added that the focus of what Narrative 4 have been doing has been primarily in Limerick.

“I came here last summer and saw the bones of our building and am now returning to see what is happening. I think it is truly, truly extraordinary,” he added.

“It is an evolving story in itself. The people of Limerick and the City and County Council deserve a grand round of applause. We are witnessing a revolution of how we perceive ourselves. it seems that something is bubbling up through Limerick. I don’t know what it is but we are hoping to tap into it,” McCann said.

This isn’t the first time  McCann has spoken of the new Limerick confidence. Speaking at the launch of Narrative 4 in 2016 McCann described Limerick people as having “the fire, the guts and the desire for change” and described Limerick as “a model city for how to fundamentally shift perception”.

“It feels like the time has come for Limerick,” McCann added. “It’s vibrant and edgy and new, and I feel aligned with the city. The city has a story to tell the world.”

McCann is the author of six novels and three collections of stories. He has been the recipient of many international honours, including the National Book Award and the International Dublin Impac Prize.

McCann received a Chevalier des Arts et Lettres from the French government, has been elected to the Irish arts academy and was awarded the 2010 Best Foreign Novel Award in China as well as an Oscar nomination.

Since the global charity’s HQ was established in Limerick last year its city centre space has hosted the international Narrative 4 summit as well as playing host to numerous story exchanges and open house events.

The new space is an excellent example of the versatility of the Georgian Townhouse which, following a renovation project led by Feeney McMahon Architects, now provides an exciting educational space in the heart of Limerick city.

With the Limerick centre now open, it is planned that students from all over Ireland and further afield will come to Limerick city in order to conduct workshops in storytelling, art and creative writing using a cutting edge curriculum designed by some of the biggest literary talents in the world.

It was great to see the first night of the Belltable’s new relationship with the Irish Film Institute.

The partnership will bring new Irish and international cinema to the city’s cultural hub. Every week, audiences will be able to enjoy the best in cultural cinema drawn directly from the IFI’s monthly slate.

The programme launched on Monday evening with a screening of Ken Loach’s critically acclaimed social drama I, Daniel Blake.

The introduction of the IFI’s programme to Belltable signals an expansion of the venue’s hugely popular film programme, which has grown since Marketa Dowling’s appointment as programme manager in April 2016.

Speaking at the launch Dowling said: “We are really excited about this new partnership. Our audiences will benefit hugely from IFI’s expertise and experience of programming top quality arthouse cinema. We are proud to be presenting the best in cultural cinema to the Mid-West”.

Positive coverage from the BBC

The new Limerick vision was once again at the receiving end of positive national and international media coverage recently.

Shane Harrison of BBC NI described Limerick as “already a city transformed and looking towards a future that it hopes will be bright” whilst suggesting we were perfectly positioned for post-Brexit investment.

This was followed by a feature in the Sunday Independent posing the question, “Could Limerick become our second city?”  The piece comes on the back of similar suggestions made by John Moran in 2016.

There is still a lot of work to be done if Limerick is to live up to its new-found ingratiation with national media. However, what we all must take note of is the fact that by having a plan, sticking to that plan and selling that plan confidently we have the potential to convince investors that the Limerick offer is one worth considering.