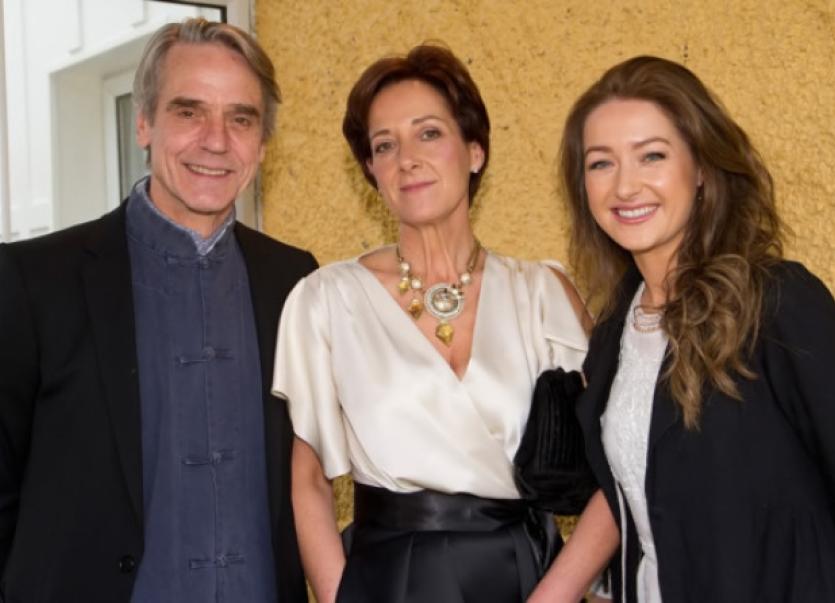 HE has braved the jungles of South America, gone toe to toe with an angry Bruce Willis and even survived the deadly intrigues of the 16th century Vatican, but nothing could have prepared Jeremy Irons for the task that faced him in Adare last Friday when he found himself addressing a roomful of glamorous Limerick ladies at an International Women’s Day charity lunch.

HE has braved the jungles of South America, gone toe to toe with an angry Bruce Willis and even survived the deadly intrigues of the 16th century Vatican, but nothing could have prepared Jeremy Irons for the task that faced him in Adare last Friday when he found himself addressing a roomful of glamorous Limerick ladies at an International Women’s Day charity lunch.

Over 250 local women turned up for the event – a fundraiser for the Hope Foundation of which the Oscar winning actor is a patron. He was joined by former Bond girl, actress and businesswoman Fiona Fullerton, RTE’s Mary Kennedy and Hope Foundation founder Maureen Forrest, as well as event sponsor Vicki O’Toole of JJ O’Toole’s. The newly appointed bishop of Waterford Fr Phonsie Cullinan was also present – one of a only a handful of men in the room.

But there was little doubt as to who was the main attraction as the star of The Mission, Die Hard With a Vengeance, The Borgias and countless other movies and television shows deployed his considerable charm on the ladies present.

“I have to say you look absolutely gorgeous – give yourselves a round of applause,” he purred.

“It is hard to look around this room and imagine a room full of men who hold the possibility within them, not just the beauty – you’d never find that among a roomful of men! – but the possibility, through being mothers, through being used to monthly pain ... you’re a wonderful bunch, women,” he told the audience.

Describing women as an “extraordinary sex”, he went on to say that he found women more interesting than men. “You think tangentially, you can juggle different balls in the air – ask a man to do that and you’d be lucky.”

And he praised Maureen Forrest, who established the Hope Foundation in 1999, for her “amazing energy”.

“I hope that this little acorn who has grown a pretty big tree will find in this room some more shoots which will continue to grow this tree,” he said.

The event also marked the launch of the Hope Foundation’s #SHEis campaign. The campaign is calling on all women globally to unite and highlight gender imbalance. Its motto is ‘She is a girl. She deserves human rights’.

Ms Forrest spoke about the work of the Hope Foundation in Calcutta, India where it works with women and children in areas such as education, primary healthcare, child protection, children’s shelters, vocational training and drugs rehabilitation.

She pointed out that India is now regarded as one of the most dangerous places to be born a girl.

“To help promote gender equality for all women regardless of where they happen to be born, we must unite with them to fight for a world where each man, woman and child gets equal justice, equal opportunity and equal dignity, without any discrimination.”

Ms Fullerton, who is best known for her role as KGB spy Pola Ivanova in the 1985 James Bond film A View To A Kill, said she became involved with the Hope Foundation when she saw video footage of the situation for some children in Calcutta. “I was profoundly moved by what I saw; as a mother of two children I don’t see how you can’t be,” she said.

The actress also described a visit to India where she witnessed “not only the horrors of life on the streets for those children but also the magical effect that Hope is having on their lives”.

Vicki O’Toole thanked everyone who had supported the event, as well as Mr Irons and Ms Fullerton. “It feels more like Hollywood than Limerick,” she quipped. She explained that she supported the Hope Foundation because “children no matter where they live are entitled to be happy and healthy”.