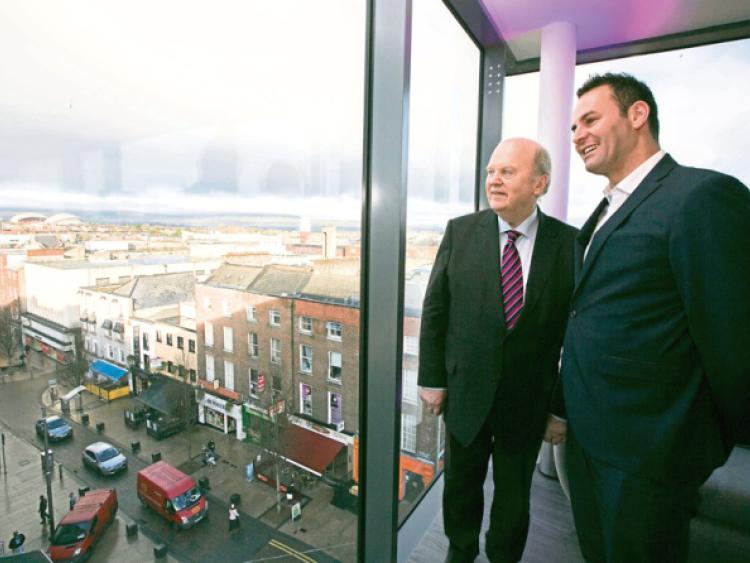 MOTORISTS in Limerick city will likely be able to work as Uber drivers later this year, one of the company’s most senior figures has said.

Speaking after the official opening of Uber’s new European Centre of Excellence on Thomas Street, Andy Byrne, the transportation firm’s head of public policy for Britain and Ireland, said he expects Limerick to join drivers in over 350 other cities in using the service “in 2016”.

”We know that people are really keen to operate the business in Limerick, and have people seeing the cars on the streets. We hope to get something in place soon. We do know there is an election coming up, so that is slowing our conversations down with government. “But we would hope to bring something in 2016,” Mr Byrne told the Limerick Leader.

Uber allows drivers who are signed up with the company to use their own cars to transport people for a fee. Although used worldwide, the application is currently only being used in Dublin here.

The practice has proven controversial in many cities, particularly Paris and London, where taxi drivers have staged protests, accusing the company of decimating their trade, and presenting safety fears around Uber drivers.

But the company has argued that many taxi drivers have in fact moved over to the Uber platform.

Meanwhile, it has been revealed the 100 staff already in place at Uber’s offices in Limerick are already serving customers in 30 cities across Europe, the Middle East and Africa (Emea). These include locations in France, Britain, South Africa, Egypt and Hong Kong.

Kieran Harte, general manager of Uber’s operations across Ireland, said they are continuing to “ramp up growth” to another 400 staff here.

At present, staff in Thomas Street are working in a variety of roles including data analysing, process engineering, and providing outbound support to drivers and passengers.

Effectively, it is the hub of Uber’s support organisation across the Emea region.

”There have been some really nice stories. Not only are we seeing people who are graduating looking for work in Limerick, we are being contacted by people in other cities in Ireland and internationally as well, who are Limerick people looking for an opportunity to work for a multinational firm back in their heartland,” he said.

Finance Minister Michael Noonan said the centre – which will eventually operate on a 24/7 basis – will have many positive knock on effects for Limerick’s business community.

“People who work in the city tend to do business in the city and play in the city. We need more jobs within the city limits, and particularly the central city area. This is why there is such a big welcome for Uber’s announcement, particularly from the city traders who see a spin-off for their commercial enterprises,” he said. “They will add a lot of trade to the city, from having a cup of coffee or staying back for dinner in a restaurant, or buying the messages before they go home.”

The announcement that Uber was to move into Limerick City was initially made last summer, with the company announcing it was to create 300 new roles, in what was seen by many as the most significant announcement for the centre in decades.

Mr Noonan said at the Limerick Chamber’s annual business awards in November that company bosses had revised that figure up to 400 staff.

Education Minister Jan O’Sullivan said: “Limerick has rejuvenated itself in so many ways in terms of culture, in terms of jobs, in terms of business, and Uber’s decision to establish a Centre of Excellence in the heart of Limerick is hugely welcome to all of us.”