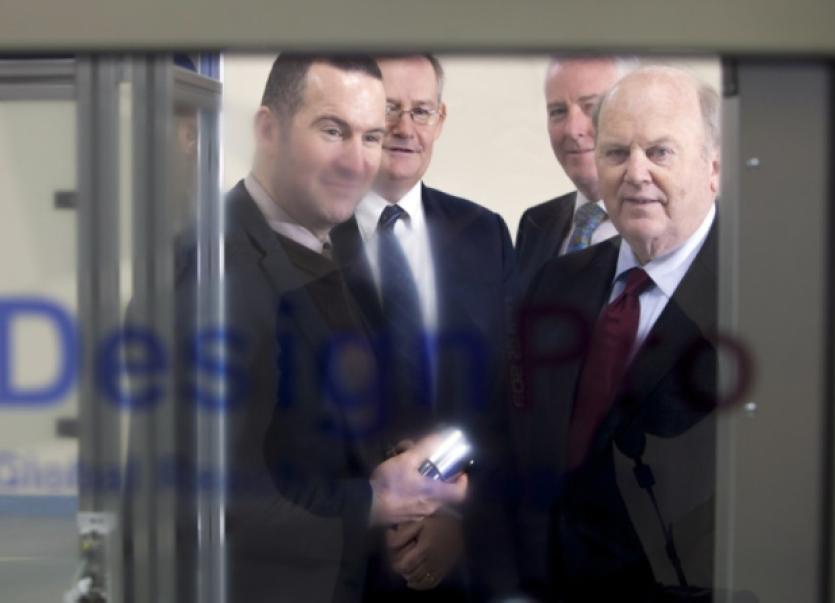 MINISTER for Finance Michael Noonan has hailed the announcement of 85 new jobs in the new Rathkeale Enterprise Centre as a “red letter” day for the area.

MINISTER for Finance Michael Noonan has hailed the announcement of 85 new jobs in the new Rathkeale Enterprise Centre as a “red letter” day for the area.

The jobs will be created over the next five years as part of a major expansion of local company DesignPro. The company currently employ 25 people in the centre, formerly home to Andersen Ireland, which closed down two years ago.

The jobs announcement was made at the official opening of the enterprise centre this Monday.

The facility, situated on a 7.5 acre site, was formerly owned by Andersen, which closed in 2013 after almost 40 years of operation there. Following the closure, Innovate Limerick stepped in to develop it as an enterprise centre on behalf of Limerick City and County Council. Since then, they have secured five other tenants in addition to DesignPro - Acorn Technologies, Michael Enright medical supplies, The Butterfly club, Long and Fitzell Vets and Limerick City and County Council.

Opening the centre, Minister Noonan said it represented the recovery in the Irish economy.

“Just over two years ago West Limerick was reeling from the news that Andersen was to close but today we have the opening of the town’s new Enterprise Centre, an extremely positive day in its own right as Rathkeale gets a facility that will be a stimulus for employment and innovation.

“However, to be able to open this facility with a local company announcing 85 new jobs over the coming years makes this a red letter day for Rathkeale. It is a bold statement that Rathkeale is not just open for business but powering ahead in business.

“Huge credit for this goes to Design Pro Ltd for their continued dedication to innovation and excellence and the other companies that will be based here. But enormous credit also to Limerick City and County Council, through Innovate Limerick, for stepping into the breach created by the loss of Andersen, being proactive in the face of this loss and really turning things around by acquiring the building and creating the ecosystem here for enterprise to flourish.”

DesignPro owner and founder Paul Collins said is was a “significant day for DesignPro as we move to another exciting phase of our development and growth”.

“We are recognised today as a leading provider of precision automation and machine build services to a variety of industries such as pharmaceuticals, aviation, automotive, cosmetics and renewable energy. We are proud of the fact that we have built this business from here in West Limerick to an extent that we are relied on as a creative and highly professional partner to some of the world’s largest multinationals. Our move into this new facility will enable us accelerate the growth trajectory we have been on over recent years,” said Mr Collins.