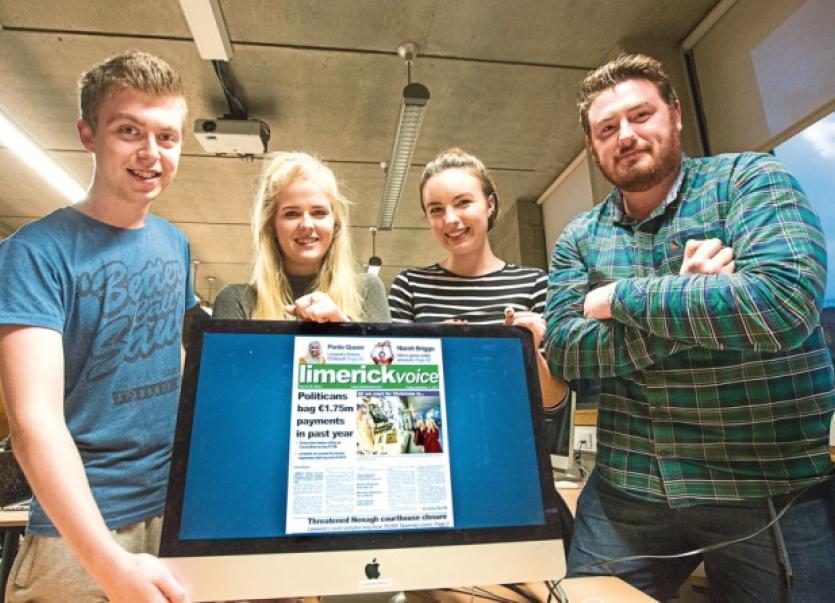 MORE than 50 students in the University of Limerick’s journalism school have this week published another annual edition of the Limerick Voice.

MORE than 50 students in the University of Limerick’s journalism school have this week published another annual edition of the Limerick Voice.

Distributed for free with this weekend’s Limerick Leader broadsheet, it is the 10th student publication produced by the journalism school since it was established seven years ago.

The 40-page newspaper will also be distributed to more than 700 homes within the Regeneration areas.

On a daily basis, the students in the final year BA Journalism and New Media class and the MA in Journalism class also published stories on the Limerick Voice website.

The lead story in this year’s publication is the revelation that Limerick politicians had claimed €1.75m in expenses and payments this year.

Speaking at the launch of the Limerick Voice newspaper in the Millstream Building in UL, dean of the faculty of Arts, Humanities and Social Sciences, Prof Tom Lodge said: “The production of this newspaper on a multi-media platform provided our students with excellent hands — on experience that will be vital to them when they enter the highly competitive jobs market next year.”

Prof Lodge also thanked the Office of Regeneration for its “continued support of the student journalism project”.

The annual project, which comes out every December, includes news, features and sports stories from the city and county, and within designated Regeneration areas.

Launching the newspaper, UL head of journalism, Mary Dundon said: “The editors of local and national media have told us that they need graduates with good analytical skills who can write across a range of multimedia platforms — we are producing those graduates at UL.”

Editor Derek Bowler said that this year’s team was “incredibly talented” and played a “pivotal role” in the paper’s production.