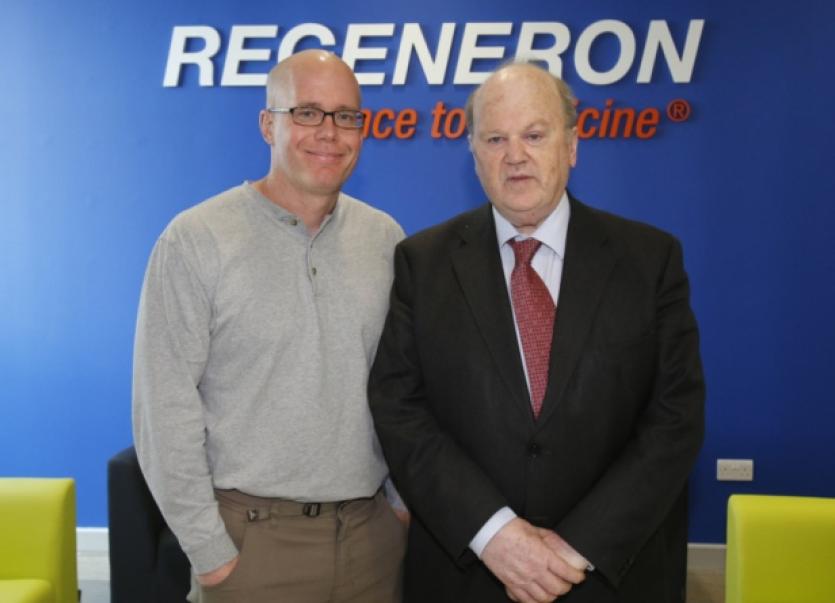 BIOPHARMACEUTICAL firm Regeneron has announced the creation of 200 new jobs, as part of a €308m investment in Limerick.

BIOPHARMACEUTICAL firm Regeneron has announced the creation of 200 new jobs, as part of a €308m investment in Limerick.

The new jobs - which will be filled over the next 15 months - means Regeneron will have more than 550 permanent staff in place in Limerick.

And with the number of contractors building the 12-hectare high-tech facility at the former Dell factory, this will rise to more than 1,000 people.

“To be creating 500 jobs over such a short space of time clearly shows the confidence the company has in Limerick as a place to operate a global business,” said the Fine Gael TD.

“It is a major endorsement of the workforce here as well as the quality of education provided by our third level institutions and the worldwide connectivity we provide. I wish to congratulate all at Regeneron on this hugely significant announcement for Limerick and wish them well. Indeed, apart from these 500 new jobs created, the level of employment they have created during construction of the plant in Raheen has been a boost to the construction sector and the entire area,” he added.

The jobs announcement was hailed by Mayor of Limerick City and County, Cllr Liam Galvin, as “representative of the confidence among investors in committing to their future operations in Limerick and the surrounding region”.

“The company’s operation at Raheen Business Park has breathed new life into the former Dell facilities which had been vacant since 2009 and is creating significant employment in the local construction sector. Regeneron’s commitment to Limerick has sent a clear message out to other potential investors that Limerick is an attractive location for investment,” said Mayor Galvin.

Conn Murray, chief executive of Limerick City and County Council, said the local authority had worked with “IDA Ireland and others to ensure the right environment has been created to encourage and enable Regeneron to further expand its operation here”.

“Today’s announcement is particularly good news for Third Level graduates in Limerick considering the majority of employees already recruited by Regeneron are from Limerick and the wider Munster region, while a significant number of full-time employees are graduates of the University of Limerick and Limerick Institute of Technology,” he said.

“Limerick City and County Council looks forward to working with Regeneron and any other company exploring investment opportunities in Limerick,” he added.

Based in Tarrytown, New York, Regeneron discover, invent, develop, manufacture and commercialise medicines for the treatment of serious medical conditions, including eye diseases.

So far, 350 staff are working in the Limerick facility, and on top of this, there are also many other contractors working around the clock from a variety of backgrounds including electrical, civil and mechanical engineering, as well as construction workers.

Earlier this year, the company announced that of the staff who have already secured jobs at Regeneron, 38% hail from Limerick, with the majority being graduates of UL or LIT.

Speaking then, Daniel van Plew, its senior-vice president and general manager of industrial operations and product supply said: “We have been really impressed at the positive, can-do attitude of the local community.”

He said Regeneron was “super happy” to be in Limerick.

Elsewhere today, Mr Bruton will also officially launch the Mid-West Action Plan for Jobs at the Limerick Institute of Technology. This will aim to see thousands of new jobs created in the region over the next decade and beyond.