Increase in cigarette duty a feature of Noonan’s 2015 budget 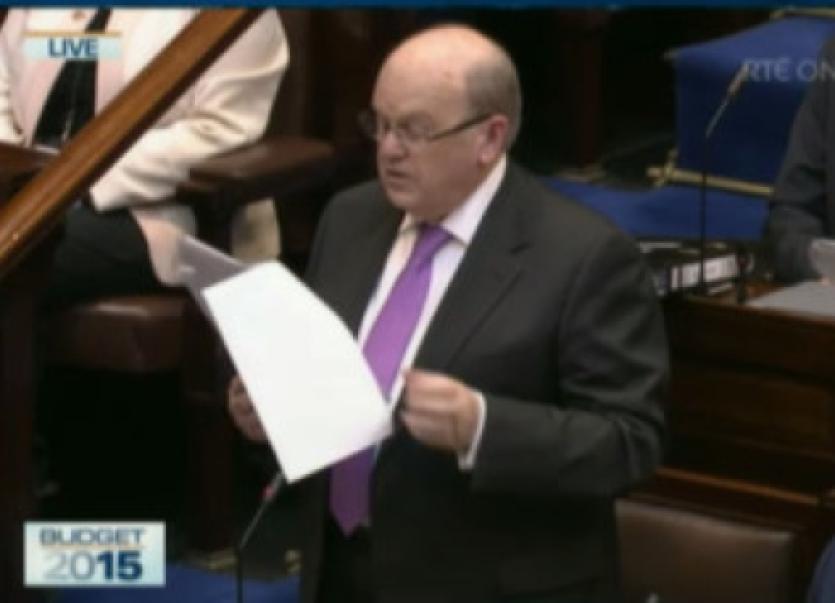 TAX on a packed of 20 cigarettes rose by 40c from midnight, the only ‘old reliable’ hit by finance minister in Budget 2015.

TAX on a packed of 20 cigarettes rose by 40c from midnight, the only ‘old reliable’ hit by finance minister in Budget 2015.

There will be no increase in the duty on alcohol, petrol, and diesel, Michael Noonan confirmed.

Meanwhile, around 80,000 low income workers will not have to pay the Universal Social Charge (USC), while the bands for middle income workers have changed.

Part-time staff earning below €12,000 will still pay no tax, while they will no longer have to pay the USC.

Mr Noonan announced in the Dail yesterday that he is increasing the income tax standard rate band by €1,000 to €33,800 for single people, and reducing the top rate of tax from 41% to 40%.

In effect, it means a working family with three children where both parents earn €50,000 each will have an additional €100 to spend each month.

Minister for Public Expenditure Brendan Howlin has announced that up to 10,000 social housing units will be built across Ireland, in a move which it is hoped will benefit Limerick Regeneration.

And the recruitment embargoes in the civil service, and the gardai have been abolished, while thousands of new teaching posts are expected to be created throughout 2015.

Child benefit is to go up by €5 a month per child, and it is hoped this time next year, a further €5 rise can be announced, Mr Howlin said.

There will be no cuts to social welfare next year, and a 25% Christmas bonus will be paid for the first time in more than five years.

A total of €8.3bn is to be dedicated to education next year, with 1,700 new full time equivalent positions, while €2.2bn is being dedicated to justice to increase the garda force.

The 12.5% Corporation Tax rate, Mr Noonan said, is to remain the same, while public expenditure is to top €50bn.

Mr Noonan told the Dail: “The road we have travelled down has been very difficult for the Irish people, who have made major sacrifices. But the recovery is well under way. Budget 2015 is about seeing this recovery and building for the future.”

Former Defence Minister Willie O’Dea described Budget 2015 as “strange mixture of the mediocre, the mundane and the minuscule” on Twitter.

- For more analysis of Budget 2015, see the print editions of the Limerick Leader